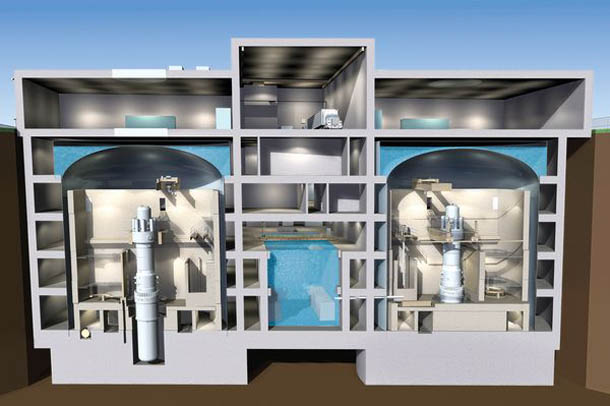 Small modular nuclear reactors, such as one above illustrated by Babcock & Wilcox, will bring together components that are housed separately at most larger, conventional plants.

Nuclear power proponents pinning their hopes on small modular nuclear reactors to resurrect the industry's fortunes likely will be disappointed, according to a report released today by the Union of Concerned Scientists (UCS). The report, "Small Isn't Always Beautiful," concludes it will be extremely difficult for small reactors -- which are less than a third the size of a standard 1,000-megawatt reactor -- to generate less expensive electricity and, at the same time, be safer than their larger cousins.

"Nuclear safety and security don't come cheap," said UCS Senior Scientist Edwin Lyman, the author of the report. "A utility that thinks it can have its own little nuclear reactor at a bargain-basement price may get exactly what it pays for: a plant that is more vulnerable to serious accidents and terrorist attacks."

When the U.S. nuclear "renaissance" sputtered due to high construction costs, low natural gas prices, and the March 2011 Fukushima nuclear disaster, the nuclear industry began to tout small reactors as way to find new customers, such as utilities that can't afford a large reactor's $8-billion price tag or countries where electric grids can't accommodate a large reactor's output. By definition, a small modular reactor generates less than 300 megawatts and is small enough to be constructed in factories and shipped to reactor sites as needed to meet demand.

The vendors currently developing prototypes are Babcock & Wilcox, Holtec International, NuScale Power and Westinghouse, which are all vying for $452 million in matching Department of Energy (DOE) grants to subsidize design and licensing costs. The agency foresees deployment of commercial small reactors by 2022.

But do small reactors make economic sense? As Lyman's report points out, utilities built larger reactors in the first place because they produce electricity at a much lower cost than smaller ones based on the principle of economies of scale. So even if small modular reactors were cheaper to build than a large reactor on a per-unit basis, they would be less cost-competitive on a per-kilowatt basis, putting enormous pressure on reactor vendors to slash the costs of construction and operation to make small reactors cost-effective.

An August report by the Institute for Energy and Environmental Research came to similar conclusions. IEER found that small reactors present an even bigger financial risk than conventionally sized reactors because they require "investment to create an entire mass manufacturing supply chain designed to sell scores of reactors each year to try to replace the economies of scale" of large reactors with the economies of mass production. According to IEER, small modular reactors are a "poor bet" to revive the nuclear industry because the manufacturers would need a huge volume of orders and tens of billions of dollars in taxpayer subsidies.

This economies of scale problem has prompted vendors to try to reduce their capital costs by cutting corners on important reactor safety features, including containment structures, which reduce radiation releases in the event of an accident. Meanwhile, to cut small reactor operating costs, vendors have been pressuring the Nuclear Regulatory Commission (NRC) to weaken requirements for emergency planning, control room staffing, and security force staffing. And to make matters worse, the NRC's discussions with the vendors on their designs and safety analyses are largely occurring behind closed doors to allegedly protect proprietary information.

"Some small modular reactor concepts may have desirable safety characteristics," said Lyman, "but if they are not carefully designed, licensed, deployed and inspected, they could pose comparable or even greater safety, security and proliferation risks than large reactors. Meanwhile the vendors are hiding their design details and asking the public to trust them."

Small reactor aficionados argue that mass-producing the reactors on an assembly line instead of building customized reactors on site would cut costs. Lyman says that this is an unproven proposition and warns that any benefits of manufacturing reactors on a production line could be undercut by generic defects that would spread throughout the entire reactor fleet. Problems with modular construction already have delayed four new Westinghouse AP1000 conventionally sized reactors in Georgia and South Carolina.

"It will take many years of manufacturing experience before the industry will be able to confirm that small reactors can be built as cheaply as they say," said Lyman. "And that means that it will take massive taxpayer subsidies to get this industry off the ground."

The challenge for small reactor vendors will be to figure out how to reduce costs without sacrificing safety and security, the report concludes. It calls on the DOE and the nuclear industry to collaborate on developing plant designs that would be truly safer than the current generation, and on Congress to ensure that the DOE -- which has traditionally been an unapologetic nuclear power cheerleader -- spends taxpayer money only on designs that are safer and more secure than currently operating reactors.

"In the aftermath of Fukushima, the Energy Department and the industry should not be promoting the false idea that small reactors are so safe they don't need 10-mile emergency planning zones," said Lyman. "Nor should they be encouraging the NRC to weaken its other safeguards just to facilitate small reactor licensing and development. That would be a recipe for disaster."