A group of people clusters in a stairwell, cellphone cameras held high. I try peeking over their shoulders to see what is captivating them without success, so determine to revisit the scene later in the evening. All through the Emergency Arts building in downtown Las Vegas, performers are making pop-up appearances in unusual spots. Burlesque dancers take over a freight elevator, a 'spontaneous theater of the absurd' entertains audience members in the rear of a U-Haul truck parked up in the loading bay, an opera singer resplendent in Rococo costume leads a small boy in a waltz around an art installation ... and I discover later that it is a tap-dancing duo who command the stairwell as their stage.

The Small Space Fest is just one evening of performance, but the art installations remain on view for a month. The project has been devised by the recently formed Weft in the Weave Collective consisting of visual and performance artist Heidi Rider, performer, playwright and director Elizabeth Nelson and actor, director and photographer, Adriana Chavez. All three studied at Dell'Arte International School of Physical Theater in Northern California and have since worked on numerous educational and collaborative projects. They describe their aim with Small Space Fest as creating a collaborative experience that brings together music, painting, photography, dance, opera, theatre and new media.

During the six years I've lived in Las Vegas, I've experienced a number of large-scale art events that have highlighted performance, installations and new media works while bringing together local, national - and sometimes international - artists. MAS Vegas brought 50 LA-based artists to show alongside Las Vegas artists in a one-night event in 2014. The Contemporary Art Center's Off the Strip New Genres Festival and the Cosmopolitan of Las Vegas/Art Production Fund's P3Studio are popular projects currently in limbo. The international London Biennale Pollination project introduced to Las Vegas in 2010 has altered format each time, but continues to focus on performance and audience-participation events. In addition, the Life is Beautiful festival established in downtown Las Vegas in 2013 has hosted a program of murals, installations and immersive art experiences.

All of these events have encouraged interaction between locals and visitors, delivering engaging art experiences in often unexpected, utilitarian spaces. The tangible excitement in the air at Small Space Fest as visitors explore every small cubicle, corridor and cupboard space in the former medical building is testament to the ongoing demand for fresh, immersive art experiences. 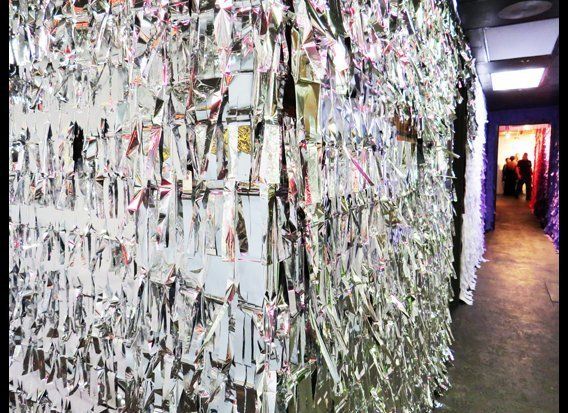 1 / 25
An installation by Justin Favela and Mikayla Whitmore welcomes visitors in the entrance to Small Space Fest.