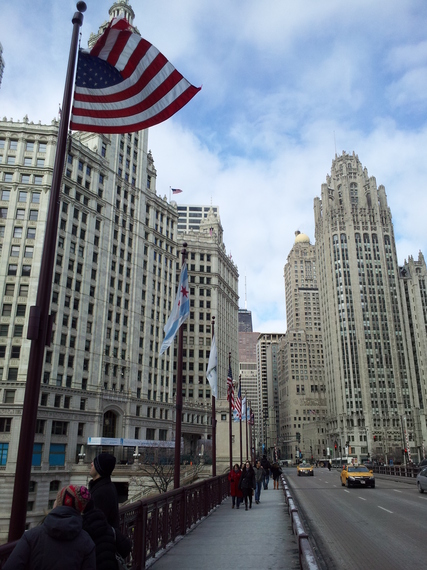 Yesterday morning, I went to Cracker Barrel for breakfast. Someone with me said, "I feel sorry for that lady sitting by herself." We said, "Go say hello..." She did. She pulled up a chair and talked with this dear lady....and ended up eating breakfast with her. She found out that her name is Anita, her husband died of dementia last August after 58 years of marriage, that her church friends are her only "family" here and that Cracker Barrel is an easier place than most to eat alone without feeling out of place. They traded stories and phone numbers. The waitress came by and said that it had made all of the staff's day. I couldn't be prouder. I love you, friend!

I was walking down Michigan Avenue last Tuesday when I passed a group of teenagers who looked like they were up to no good. They fit the part, flat bill hats, bagging pants and loud. As I walked ahead of them I gave little thought to who they were as people. As I continued to walk, I passed a lady in a corner sleeping with her two girls on the ground. She had a look of desperation, the kind that can't be manufactured. She was clearly worn out from life and had a simple sign that said please help.

It was a plea that I ignored at first. I walked another block and those words stayed with me. I turned around to offer some help. As I did the group of teenage boys had caught up to me and I noticed one of them quietly slip away from the group and drop dollars next to this worn women. Unlike me, this young man didn't hesitate; he responded to her please help sign immediately. I dropped all the money I had in my wallet next to her and said a few words that seemed completely inadequate. I was humbled and was taught something by a young man who didn't intend to do anything but the right thing. Thank You.

Running to catch the subway at 14th St and 8th Ave in Manhattan, I came across a mother with multiple bags and a stroller approach the stairs. A group of students with boxes in their hands, dropped their boxes at the top of the stairs, lifted the stroller and the mother's bags, carried them down the stairs just as the subway pulled into the station. The mother was struck and surprise by the kindness of the students (who ended up missing the train, walked to the top of the stairs to get their boxes and returned to the platform).

It was my first time in Hanoi, Vietnam and I was trying to walk off my jet lag. I quickly realized that crossing the street through millions of motorbikes and taxi cabs with no traffic signals was nearly impossible and feared that I would not make it back to the hotel alive. At one point I barely made it across to an island in the middle of a particularly daunting intersection. Once I got there, though, I saw no way out. I didn't feel safe going back the way I'd come and I saw no way to go forward. I was basically standing there paralyzed for about five minutes until an old Vietnamese woman tugged on my elbow. She was so small and hunched over that she came up barely past my waist and at first I thought she wanted me to buy some of the dried squid she was selling. Instead she smiled at me, grabbed onto my elbow and helped me walk across the street. That moment meant the world to me. Thank you!

Highlighting the good around us and in us