The van rounded each bend with a sharp turn, and I felt my stomach drop at the combination of nearing the cliff's edge, and the breathless mountain scenery. With each pass the air grew thinner, yet the views grew more magnificent. Rising mountain peaks, cotton ball clumps of fluffy, white sheep, and the occasional Quechua native, dotting the landscape with a burst of color.

While traveling through the Sacred Valley region of Peru, I had been given the change to visit the tiny town of Rumira, high up in the Andes mountains. Accompanied by Threads of Peru, an NGO dedicated to the preservation of the traditional Quechua weaving traditions, I had the rare opportunity to meet and speak with the women of Rumira, talking about their daily routines, the process of weaving, and raising children while working such a laborious life.

As the van rumbled to a stop on a precariously large mound of wayside rubble, I tried to keep an open mind. I looked around at the handful of handmade huts comprising the village, the dogs running around, and the children covered in the dust of the nearby construction zone.

This was definitely not in my Lonely Planet guidebook.

I was shocked to see many of the women working in the construction zone, alongside the men, while still in their traditional outfits consisting of long skirts, wool sweaters and bowl-shaped hats. As my guide Urbano gathered all the women together to speak to me, I started noticing little details about the scene in front of me. One woman, who could not have been older than 20 was breast-feeding an infant while sitting on a pile of dusty rubble­­, a gang of four little boys were swinging around a metal pole, clearly the favored toy of the day, and two little girls, no older than eight, were staring and giggling shyly at me.

Clearly, my hiking boots and muted Uniqlo fleece did not fit in with the local love for bright colors, and traditional garb.

While the women were obliging in abandoning their work for a few hours, it was clear that they were eager to get through this interview and back to work. With the help of Urbano, a native Quechua speaker, I was able to learn about the current project in Rumira. The community was working together to build pipes, so that they would have running water for a communal bathroom. When I realized that each hour I detained them was an hour without a toilet, I tried to speak as succinctly as possible. The women explained that their first priority is assisting the men with the farming. Men in this region tend to work in one of two occupations: agriculture, or as a porter on the Inca Trail. The women are expected to help out with the farming, as long as help is needed, and then with the local community construction.

Weaving is actually more of a luxury, than a job, with many of the women citing this as their favorite pastime. Each woman was adorned in a brightly colored, traditional outfit, personalized with unique details and beading. Young girls observe their mothers at this practice, and tend to start fully learning to weave at around the age of 10. Each garment has a particular style, specific to the region. In Rumira, Urbano explained that the women would buy wool from the markets, usually pre-dyed to a bright fuchsia or neon green, and then sew on the geometric patterns. Each woman's sweater and shirt were also typically purchased at a local market, but the hats were designed by hand. In Rumira, the traditional hats were a rounded basin shape on the crown, secured with a thick, white strap around the chin. Each woman would bead patterns along the band, creating beautiful patterns of birds, Inca kings, and local fruits.

While the women are off farming, cooking, building, or weaving, the children are left mostly to their own devices, creating toys and amusement from items around the house. Cereal boxes, empty bowls, and water bottles can create hours of entertainment. With such a busy life in Rumira, the children tend to grow up quite fast, helping out with the rest of the community by age ten. 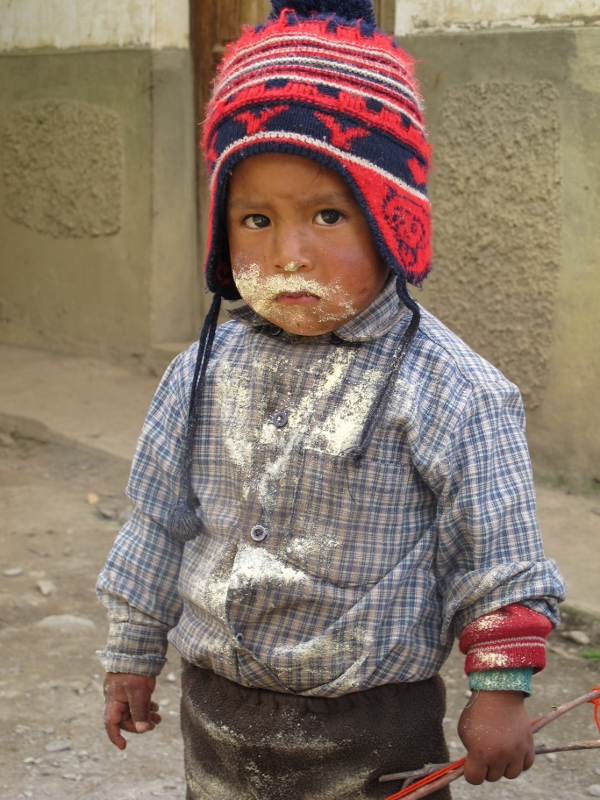 Despite my knee jerk western reaction to judge the lifestyle of Rumira, i found myself noticing the peace in the air. The women all seemed very content with their life, and were eager to continue working on a project that would greatly improve their quality of life. They seemed to enjoy the slow pace, and as the day wore on, so did I. The noticeable lack of traffic sounds, and mindless chatter was replaced by the splashing of the nearby river and the calls of the surrounding wildlife.

There was life happening all around me, surviving over 12,000 feet in the sky. Life here in Rumira was simple: The locals did not ask for much and they did not take much in return. Seeing people, animals, and nature coexisting in harmony was truly a breathless experience, one finally not induced by the high altitude.