Tiny sharks about the size of a human hand have a superpower of sorts: their bellies glow, according to new research that also showed these smalleye pygmy sharks use the glow to hide from predators lurking below.

Scientists had proposed the smalleye pygmy shark (Squaliolus aliae) sported light-emitting organs called photophores for use in camouflage, but that was never really tested, said study researcher Julien Claes of the Université catholique de Louvain in Belgium. "It wasn't even known if these organs were really functional, able to produce light," Claes added.

The small shark, which reaches a maximum length of just 8.7 inches (22 centimeters), lives well below the water surface in the Indian and western Pacific Oceans. The new research, detailed this week in The Journal of Experimental Biology, suggests their glowing bellies (a type of bioluminescence) would replace the downwelling light from the sun, or the moon and stars, that is otherwise absorbed by their bodies. 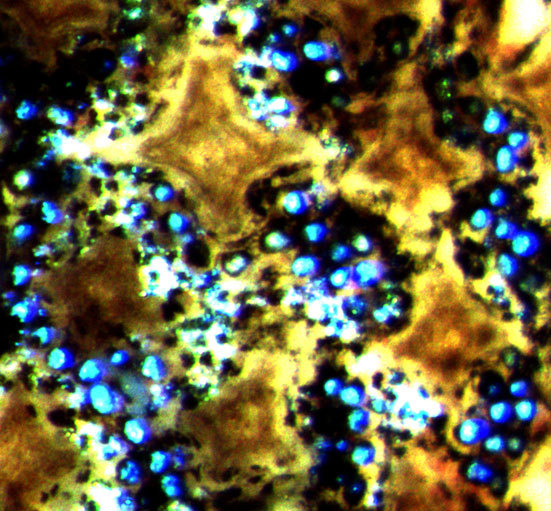 For the study, Claes and his colleague Jérôme Mallefet, along with Hsuan-Ching Ho from the National Dong Hwa University, Taiwan, captured 27 adult, smalleye pygmy sharks off the coast of Taiwan and brought them to the National Museum of Marine Biology and Aquarium. In the lab, the scientists took skin samples from the sharks and tested how they responded to various chemicals known to trigger biological processes such as light production. Sure enough, melatonin caused the shark's skin to glow; neurotransmitters known to regulate light production in deep-sea bony fish had no effect on the pygmy's skin. When the team added the hormone prolactin to the samples, the glow faded. [Bioluminescence Quiz: Do You Know About Glow?]

In lantern sharks, prolactin triggers 30-minute-long bursts of light, which the sharks likely use for various means of communication. Lantern sharks use melatonin to trigger a constant belly glow used in camouflage.

Light-emitting organs called photophores cause the smalleye pygmy shark's belly to glow. Shown here, the glowing belly of a lantern shark, which looks very similar to the pygmy shark.

The difference between the two sharks, with the pygmy shark only able to produce a constant glow, Claes said, suggests the smalleye pygmy relies on its glow for camouflage, but not communication as the lantern shark does.

The researchers also suggest both sharks evolved this ability from an ancient organism that would have used these hormones to change their skin pigmentation from light to dark (or vice versa) as a form of camouflage. So while melatonin would've lightened the skin of this predecessor, prolactin would have darkened it. Today, these hormones would work as a type of pigment shade, either moving the pigment cells in front of the light-emitting organs (covering them up) or retracting them to expose the glow. Essentially, the sharks now regulate their bioluminescence by changing the degree of pigmentation covering the photophores.

In the smalleye pygmy shark, prolactin pulls the pigment shade over the photophores to dim the glow, while lantern sharks seem to have co-opted this mechanism to produce brighter and shorter bursts of light for communication. As such, Claes and his colleagues suggest the pygmy shark is more closely related to this ancestor than the lantern shark.

"This study is really interesting because it suggests the pygmy shark to be the missing link in the evolution of luminescence in sharks," Claes told LiveScience.