Almost 20 years ago, the California Department of Transportation (Caltrans) funded research looking for ways to keep people off the roads.

Caltrans knew that in 40 years the population of California would likely double to about 60 million people. But Caltrans wasn't at all convinced they could build any more roads or bridges. The state, simply, has run out of land. What then, they thought, was the state going to do to accommodate the increase in people and their cars?

Enter the concept of the "Smart Community." Smart because the team of university researchers liked the idea of using telecommunications as a substitute for transportation. And Community, because they also believed that something new--not a city or county per se--but a new powerful region in which citizens have a shared interest could emerge.

What happened to the Smart Communities Initiative?

The team, a dozen or so academics including myself sent copies of the report and a "How To" manual to every mayor and city manager and waited for the calls. Nobody called. It seemed the concept was too far fetched, or America's love of the automobile simply made this idea unpalatable.

Or maybe, smart communities just need smart people... and sadly, that dilemma haunts cities even more today as the concept has obviously grown in essentiality and importance in large part, because of the "Cloud," "Big Data", and what we now are calling "The Internet of Everything" (IoE), where everything is connected to every thing else. 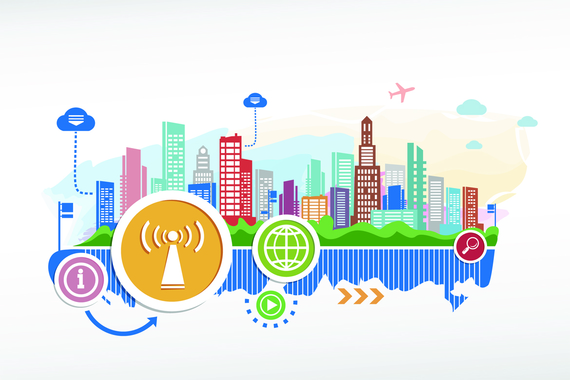 The IoE can provide cities with the tools to ensure safer cities, better transportation, mobile health care, energy and water conservation, clean air, and environmental services. By installing the broadband necessary for the IoE, cities are attracting and nurturing the best and brightest from around the world; and building the platform for innovation for everyone in that city.

To meet the challenges of the global economy, as President Obama has said before a joint session of Congress, "We need to out-innovate, out-educate, and out-build the rest of the world...We have to make America the best place on earth to do business." Increasingly, cities across America are starting to change the focus, deploy technology and prepare our citizens to out innovate, out educate and out build every other community and thus every other nation in the world.

Government Technology Magazine believes that "Cities Must Invest in the 'Smart Jobs' Workforce." When Wichita Kansas was having trouble-finding workers to fill the region's aerospace jobs "with the latest skills, local leaders listened. The result was a partnership of area governments, colleges and businesses that led to the birth of the National Center for Aviation Training." As cities start filling the IoT jobs, they too must join with the universities, high schools and training centers to fill the region's demand for a workforce with the right skills.This should give them the workforce they and other organizations need in the new innovation economy.

Last fall, the National Science Foundation (NSF) completed a two-year study on what it takes to be 'innovative' as an individual. A complete summary of results was released this year but among the 20 qualities identified, Forbes found that five are crucial to spanning the entire spectrum of the innovation process itself:

2 Collaborator - Brings together people with a diversity of knowledge to solve complex problems. Actively integrates knowledge or strategies of others though they may differ from their own.

4 Knowledgeable - Possesses expertise that is both broad and deep. Is skilled in independent learning.

5 Persistent - Continues to do something although it is hard, and other people want your actions to stop. Continues beyond the usual or expected effort.

While the city has the ultimate responsibility for developing the systems of the future, they must employ the workforce they need by working with schools and universities, and the corporate community to be sure the region was turning out the right kind of workers. As the city makes it clear that it desires to be a smart city and aggressively deploys its investments in broadband, the city will attract and retain more smart people with the new thinking skills smart cities need to succeed.

The major corporations like Cisco, IBM, Intel, Qualcomm and AT&T are now hiring people to fill these important positions. They have, in most cases, identified the best IoT applications for cities. Cities can partner with these firms to insure the right applications and the right people to build the IoT infrastructure.

Smart people and even Smarter leaders will build Smart Cities.