Hush earplugs are wireless noise-masking earplugs that connect to your smartphone and play soothing sounds, such as white noise, ocean waves and rainfall, for more than 10 hours. Hush connects wirelessly to your smartphone, so sleeping through your alarm isn't an issue; the alarm will go off right in your ears when it's time to wake up.

Invented by three University of California, San Diego students who are all named Daniel (Daniel "Ewok" Lee, Daniel Synn and Daniel "Chesong" Lee), Hush earplugs hit Kickstarter on Nov. 12 with a goal of $100,000. As of Wednesday, the campaign had raised almost $240,000.

The Daniels initially came up with the idea for Hush when their noisy college environment was causing them to lose sleep. They soon realized that smart earplugs could also benefit anyone who travels a lot, sleeps next to someone who snores or is just looking for a little peace and quiet.

"The basic value of Hush is 'block out the world. Hear what you need,'" Daniel "Ewok" Lee told The Huffington Post. "In trying to still let you hear what you need, there was no better interface than your smartphone -- everything that gets to you is channeled through your phone already! It just made sense to tap into that. Also, our earplugs are so small that it would be terrible to have to fumble with buttons on them." 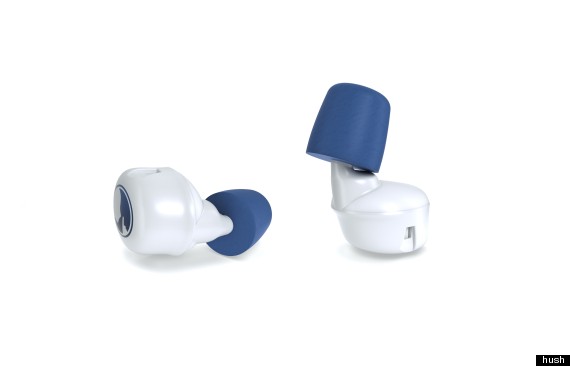 Hush earplugs will retail at about $149, and their estimated delivery is spring 2015. The Daniels are working to make them compatible with more devices.

"Hush is compatible with iOS and Android smartphones with bluetooth 4.0 enabled. We'll eventually be compatible with Windows -- we're just not at a financial stage yet to bring on another Windows phone developer."

Dreaming about that amazing night of sleep yet?

Note: Snoring can be associated with an increased risk of Type 2 diabetes and caused by serious disorders like sleep apnea. If you or your partner is a snorer, consult a doctor.

1
Jimmy Kimmel
Randy Holmes via Getty Images
The TV host told Esquire that he spent every afternoon feeling tired for no reason before he discovered he has narcolepsy. "I would doze off in meetings, watching TV, even driving," he said. "With narcolepsy, just the inside of your head is tired. It's like somebody's gently sitting on your brain. You have almost no focus. All you're thinking about is not falling asleep."

The brain disorder, which occurs in about one in every 3,000 people, causes "extreme daytime sleepiness and sudden, irresistible bouts of sleep that can strike at any time," according to the National Institutes of Health.
2
Rihanna
Getty
The singer has taken to Twitter on multiple occasions, sending messages that she's having trouble sleeping. After completing a world tour in 2011, she tweeted "Suddenly all the silence is being drowned by my thoughts! No sleep" and later started adding #GOtoSLEEPRobyn to some of her tweets.

Surfing the web, checking email or tweeting too close to bedtime, however, can send signals to your brain that disrupt the natural bedtime process and make it harder to drift off.
3
George Clooney
Getty
The Oscar-winning actor told The Hollywood Reporter that he has trouble falling asleep without the TV on. "I'm able to numb out," he said about the blue glow.

While many claim falling asleep to the TV helps them nod off, it can actually disrupt the sleep cycle. Your brain will still listen in on subtle changes in volume, even if you're asleep, Phillip Gehrman, Ph.D., CBSM, clinical director of the Behavioral Sleep Medicine Program at the University of Pennsylvania told The Huffington Post.

That could account for Clooney's trouble staying asleep. "Without question, I wake every night five times," he said.
4
Lady Gaga
Dave J Hogan via Getty Images
There's no denying the pop star is, at the very least, extremely passionate about what she does. But all that drive has her tossing and turning at night, she told the UK's OK! Magazine in 2010. "My passion is so strong I can't sleep -- I haven't slept for three days," she said. "I lie in bed and try to pray and breathe. I have a very overactive mind. "

Whether or not she really meant she'd been awake for a solid 72 hours or simply didn't sleep well three nights in a row, sleep deprivation has real consequences. Among the most frightening is a decrease in reaction time, which, if you're driving, could prove deadly.
5
Shaquille O'Neal
STR via Getty Images
The basketball giant sat down with Dr. Charles Czeisler, director of the division of sleep medicine at Harvard Medical School, who approached him to be a part of a sleep study. O'Neal's girlfriend had been insisting he get tested for sleep apnea, after noticing him snoring and then seemingly stop breathing during the night, she said.

Sleep apnea, which occurs when someone temporarily stops breathing during sleep, is more common in people who are overweight and/or have thick necks. At 7'1" and 325 pounds, Shaq certainly fits the bill.

Sleep apnea is often treated with a ventilation therapy known as CPAP (continuous positive airway pressure) that requires the snorer to sleep with a Darth Vader-esque mask. Shaq said he planned to wear his every night -- and joked he might wear it out on the town, too.
6
Kevin Jonas
Getty
Nearly a third of American adults snore, which can cause serious problems in a relationship if a light-sleeping partner is constantly woken up.

Reportedly among the ranks of mismatched sleep partners are musician and actor Kevin Jonas and his wife Danielle, according to In Touch Weekly. A friend of the couple said "Kevin and Danielle had never spent a night together until their wedding night, so she had no clue that he snores so loudly. She loves her husband, but now she sleeps in a guest room when he gets too noisy."

Snorers can try sleeping on their sides instead of their backs, using a pillow or a tennis ball sewn into a T-shirt to stop them from rolling over.
7
David Ortiz
Getty
During a 2009 slump, the baseball star had only two home runs and 22 RBI. In his previous years with the Red Sox, he had averaged 39 homers and 122 RBI. The slip in his performance affected more than just his stats. "My body is resting every night, but my mind is spinning with all of this [stuff]," he told USA Today. "It's hard to sleep."
8
Sandra Bullock
Getty
After adopting her son, Louis, the Oscar-winning actress drastically cut down on sleep. She told the UK's Now Magazine she was surviving on just three hours a night, but that it wasn't difficult. "I don't want anyone else to have the pleasure of changing [his] diapers but me," she said. "There is nothing hard about loving Louis."

That may be true, but Bullock's extreme sleep deprivation could actually hurt little Louis. Severely skimping on sleep has been linked with a greater risk of making serious mistakes in doctors, police officers, truckers and others in positions that require long hours. To ensure you're giving little ones the best care, you need to take care of yourself first.
More:
healthy livingSleepsnoringsleep + wellness