Talk about a bright idea!

Researchers at Carnegie Mellon University in Pittsburgh say they've developed "smart headlights" that provide bright illumination of the road ahead without blinding the motorists in oncoming vehicles.

The still-experimental headlights work by tracking oncoming vehicles in the vicinity and then instantaneously dimming only the specific rays of light that otherwise would make it into the motorists' eyes, according to a written statement released by the university.

"With our programmable system...we can actually make headlights that are even brighter than today's without causing distractions for other drivers on the road," Dr. Srinivasa Narasimhan, associate professor of robotics at the university and a member of the team who developed the smart headlights, said in the statement.

If the lights work as well in the real world as their developers expect them to, they could save lots of lives. Although there is 60 less traffic at night, more than 40 percent of all fatal car accidents happen then, according to the National Association for Youth Safety.

And the headlights are designed to do more than reduce headlight glare. They can block the rays of light that reflect off snowflakes and raindrops to enhance a motorist's vision when driving at moderate speed at night in snow or rain. They can also boost light output as needed to fully illuminate road signs and potential obstacles.

"We can do all this and more with the same headlight," Narasimhan said in the statement.

How do the headlights work? Instead of the standard lights or LED clusters used in conventional automobile headlights, the smart headlights use a technology known as digital light processing, or DLP--the same technology used in some TVs.

The technology can divide beams into a million tiny beams, each of which can be independently controlled by an onboard computer in response to signals from a camera that tracks precipitation, signs, obstacles, and oncoming vehicles. 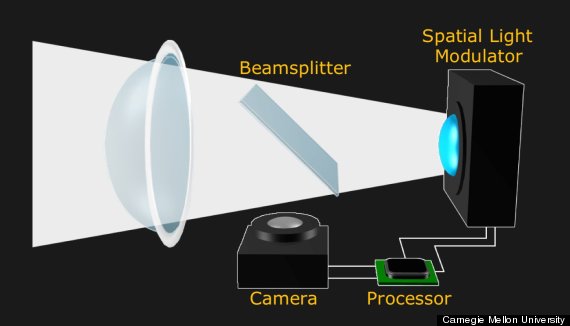 The components that make up the smart headlights.

Everything happens in a matter of milliseconds, according to the statement, and the ever-changing illumination is barely noticeable to the person behind the wheel.

The headlights are an improved version of similar lights demonstrated by the Carnegie Mellon team in 2012 and described then in a Technology Review article.

"The current system is about 10 times faster than our old one in 2012, can do many more tasks (anti-glare, object highlighting, road visibility and bad weather visibility improvement), and has been demonstrated for the first time on a vehicle moving at high speeds in regular traffic," Narasimhan told The Huffington Post in an email. "[The] previous system was a proof-of-concept demonstrated in the lab."

The road-testing was done with a prototype light mounted atop a pickup truck (see above). Plans call for a smaller version of the headlights to be mounted in the headlight slot of a truck next year.

When might the headlights show up in new cars? Narasimhan said his best guess was in three to five years.


These Kids Grew Up To Be Famous Geniuses