By Lane Nieset for ShermansTravel 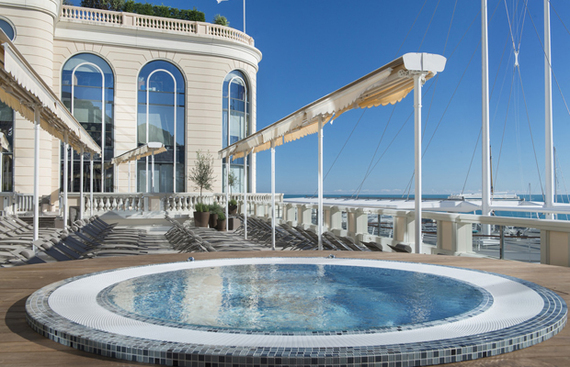 The principality of Monaco gets quite a rep for flashy cars and luxe landmarks like the Casino de Monte-Carlo, the backdrop for many Bond films. But the three-mile-long country (which ranks second-smallest in the world after Vatican City) is more affordable than events like the Formula 1 Monaco Grand Prix make it out to be. In less than an hour, you can walk from one side to the next discovering some of the more tucked-away treasures the country has to offer -- and spend no more than you would on a trip to the Caribbean. Here's how to make your dollar go the extra mile in Monaco, with or without the American dollar's current strength against the Euro.

Pick up local produce at the Provençal-style market in the Place d'Armes or step inside the covered Condamine food hall at the far side of the square, where you'll find a lively lunch crowd dining at picnic tables and on bar stools at the various vendors spread throughout the building. Most of the stalls sport local or regional cuisine. One of the most popular is Truffle Gourmet, a stand serving truffle-infused Italian fare (€7-€20, or around $8-$23) best washed down with a shot of Limoncello.

Michelin-starred restaurants also line Monaco's coastline, but you don't have to spend a fortune to sample a fantastic meal at one of these spots. The one Michelin-starred Le Vistamar at the Hôtel Hermitage, for example, typically boasts starters averaging in the mid-€30s and fish in the mid-€50s. But you can snag a three-course seasonal menu, spanning dishes from mackerel to monkfish medallions that keeping in theme the "one fish, one vegetable, cooked once" for €68. There's even a €46 business menu of two courses place either a glass of wine or a half bottle of mineral water. Whatever you choose, we recommend sitting on the terrace and ending the meal with one of the most sumptuous-looking (and tasting) desserts, like the dark chocolate in thin crisp with mint chocolate ice cream and peppermint frost.

If you're planning on spending a few days in the area, pick up a Côte d'Azur Card (€39 for a three days €54 for a five). The pass gets you access to 150 sites and activities in the Riviera, including two top spots in Monaco: the Oceanographic Museum, with one of the oldest aquariums in the world (typically €14), and the Exotic Gardens, with a thousand types of cacti and panoramic views over the principality (typically €7.20). The pass also includes water sports like paddleboarding and kayaking at the nearby mermaid lagoon-looking Cap d'Ail, a beach that's a favorite in the area for locals.

Monte-Carlo SBM has four properties lining the Mediterranean in Monaco, including the five-star Hôtel Hermitage, Monte-Carlo Beach, and Hôtel de Paris (closed for renovations until 2018). These luxe spots, unsurprisingly, don't come cheap; they start from €400 or €500 per night. A smarter splurge is the four-star Monte-Carlo Bay Hotel, from €280 per night. The sprawling hotel has more of a resort and family-friendly vibe than the others, with balcony rooms overlooking the sea. Guests also enjoy yoga classes, a casino, and a sandy bottom lagoon to float around on -- essentially a luxury version of a lazy river.

For the lower hotel price, you'd also access many other SBM facilities, thanks to the Cercle Monte-Carlo black card all guests get. It grants you free use of a shuttle to other SBM properties, leaving every 20 minutes from the hotel; entry into the Casino de Monte-Carlo (usually €10); and access the wellness area of the recently revamped Thermes Marins Monte-Carlo spa, where you can relax in a Jacuzzi overlooking the Grand Prix racetrack or take a dip in the heated indoor saltwater pool. Like an AmEx Black Card, Cercle Monte-Carlo

Just planning on exploring just for the day? It's an easy trip by train or bus from nearby cities in France, like Nice or Cannes.