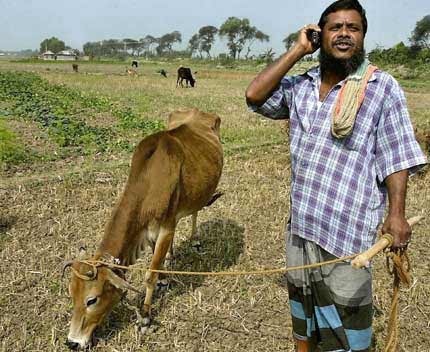 The smart phone is the great equalizer of knowledge access. Never before has so much information been accessible to so many for so little cost. The global spread of smart phone tech has resulted in a device which entered the market as an expensive device available only to the wealthy metamorphosing in less than a decade into a personal tool whose market penetration spans across all socioeconomic demographics.

When knowledge was only accessible through printed materials, the cost of publication and distribution along with the need to continually print updated information created a barrier to access of knowledge for those individuals, communities and countries who could not afford entry into that world of knowledge. And while the internet introduced the possibilities of accessing information from each other, such as Wikipedia, and from our government agencies through websites and sunshine portals, the true catalyst for the
explosion of open data
was the proliferation of the smart phone and the understanding that for the first time that data could be consumed in mobile format to solve problems for cities and empower citizens. Within a year of its introduction, countries across the globe began signing up as supporters of open data and delivering data feeds out to the public, spawning a new culture of organizations of entrepreneurs working to develop innovative technologies solving problems facing people and cities.

Beyond access to knowledge, the changes in culture, commerce and communication are ever growing because of the smart phone. Citizens living within the confines of repressive regimes
continue to access information
and news despite efforts to have that access banned or suppressed, often risking arrest or even execution. Think of that as a barrier, and yet it is still a price many have been willing to risk paying because the desire to gain access to true information is that high. Smart phones have resulted in citizens documenting revolutions, atrocities, and misconduct
and then sharing their footage with the world
through social media platforms like Twitter and news sharing sites like reddit. The world is watching in ways that were never possible before, and it has led to a higher level of accountability from those in power.

Smart phones have also served as a portal to e-commerce according to a report by ATKearny, thanks to internet and mobile commerce engines within facilitating virtual showrooms and stores as well as international transactions. When smart phone technology can deliver this kind of access to individuals all across the world, that is a great equalizer of personal empowerment and freedoms.

As the costs of smart phones are reduced, they continue to break down barriers within lower socio-economic communities. With the reduction in cost to manufacture hardware smart phone tech, the new barrier to access of knowledge becomes connectivity. While many other countries throughout the world have made cellular service inexpensive,
this has not been the case in the U.S
. The industry is still controlled by a handful of major players who have kept a stranglehold not only the pricing of service but access to it at all, although some see a
new initiative by Google
as a possible disruptor to the status quo. The US lost out on an incredible opportunity to equalize access to connectivity when the television industry shifted to digital delivery. The '
old' television waves were auctioned off
to the highest bidder, creating an exciting cash infusion for the F.C.C., but none of the winning bidders have expressed any intentions of opening those up for the delivery of affordable connectivity which could deliver access to remote, rural regions of the country. The immediate monetary gain of those expensive bids killed the chance of delivering equal access to remote communities and families without means to pay for internet or mobile access. While some forward-thinking cities are providing free wifi access within specific locations within their communities, such as libraries, civic squares, and, in NYC,
old telephone booth
s, it is still far to few and too limited in scope to be considered anything close to an equalizer.
Advertisement

For many educators, parents and students, the immediate access of information has resulted in our current education system becoming irrelevant and outdated, especially in later grades once the foundational skills such as reading are mastered. As the global community becomes empowered to independently access knowledge and training, it begs the question of how long it will take us to demand a shift away from the current waste of tax dollars spent testing, retesting and testing some more to assess a student's ability to memorize and regurgitate information which is already stored in the smart phone in their backpack. If those same tax dollars were spent on teaching how to find information, vet it, and synthesize it - we could foster a generation of creative, inventive students who could take that information and further innovate their own future. If our schools fostered creativity, curiosity and analytical thinking, we'd also likely see the side-benefit of less children needing medication to sit still and lowered dropout rates.

The smart phone has been the conduit for equalizing access to information. But it is only the beginning. By supporting the continued growth and spread of mobile technology throughout the globe, we continue to empower and lift up more individuals. The imperative is on us to educate our children in ways that empower them to continue the momentum of innovation into the future.