Confession time: I've been watching "The Bachelor"... and I like it. I've been hopelessly and unfortunately trapped in the franchise's web of tears, overly-earnest declarations of love and tacky dresses -- and I'm far from alone.

Most of my peers have a love-hate relationship with "The Bachelor" franchise -- specifically, we hate that we love it. The underlying messages of the shows are beyond terrible. We're essentially told that all women in their twenties should be desperately searching for a man to marry (most of the 30-something bachelorettes are portrayed as a particular breed of desperate), and that women are, in general, complete and utter nutjobs. Although, of course, this only applies to white women, as people of color rarely get cast.

Yet even knowing all of these things, season after season, droves of intelligent, successful women come back to ABC and host Chris Harrison for more. In the words of "Brokeback Mountain's" Jack: "I just can't quit you." So why do we do it to ourselves? Is it just pure masochism, or is there something else at play?

The Fake Reality Of "The Bachelor" Franchise Sheds Light On How We View Love
As a writer and pop culture obsessive with an academic background in Sociology, I was immediately fascinated by what "The Bachelor" and "The Bachelorette" say about the way our culture thinks about love and sex. As progressive as many Americans have become about these matters, we still find it hard to resist a good ol' retrograde romance. Slut-shaming? We've seen it on "The Bachelor." A near-obsession with framing romantic attachment as a fairy tale? We've seen it on "The Bachelorette." There's an entire industry built around making one's wedding day the only day that matters, we are still collectively embarrassed to speak honestly about sex and there is still a serious lack of representation when it comes to anything beyond white, heterosexual romantic partnerships. All of these things play a part in the narratives of "The Bachelor" and "The Bachelorette." 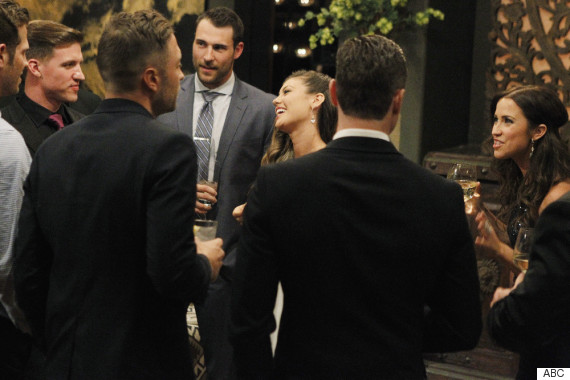 It Allows Us To Feel Just A Little Bit Superior
I think the so-bad-its-good appeal of "The Bachelor" franchise is probably related to the morbid curiosity that impels people to rubberneck on the interstate. Watching the contestants of "The Bachelor" and "The Bachelorette" cry in limos, discuss their burgeoning careers as VIP cocktail waitresses, junkyard specialists, sex coaches and dental consultants, and threaten to physically harm each other over someone they barely know, is alternately horrifying and captivating.

We also get to feel good about the fact that none of us would go to such lengths to impress a romantic prospect. Tell another woman you'll cut her face off? Nope. Leave your Ph.D. program to move across the country to a small town? Not even if Ryan Gosling showed up in a limo holding a boom box over his head with two dozen roses and said "You're the one." (Well, maybe for Ryan Gosling...)

It's A Safe Outlet For Our Frustrations
Mondays are hard. Maybe you had a terrible weekend and are still feeling a little under the weather, maybe you had a crappy day at work, maybe your roommate is getting on your nerves or maybe you're just pissed off for no reason at all. Want a safe way to let out your anger without being hurtful to your loved ones? "The Bachelor" has you covered. Get a week's worth of snark out with a few well-timed tweets. You might piss off your followers, but they can always mute you.

#TheBachelor is an exercise in pretending humiliation and romance are one and the same.

It Makes Love Seem Simple...
If you are watching an absurdist "journey" for three months, you inevitably have to buy into it a little bit. Yes, there's still snark, but there's also a part of us that enjoys watching someone "find love" -- even when we kind of think it's bullshit. What if finding a life partner really was as easy as bouncing around the world for 12 weeks in a helicopter? What if we could control all the circumstances surrounding love and end up happy? Love isn't a 12-week competition of white wine and tears that you can "win" -- but there's something kind of satisfying about imagining that it could be.

...But It Also Makes Us Grateful For The (Oft-Painful) Real Thing
"The Bachelor" and "The Bachelorette" are shows that trade on the manufacturing of "true love." After all, in what world would 25 random girls all fall madly in love with one dopey dude (and in a matter of hours)?

While it's fun to watch all of the uber-cheesy, romance-laden dates unfold on television, the reality of sitting in an empty theater with a practical stranger watching your old baby videos or being forced by a stylist to watch clips of an upcoming movie on an iPad while you're being "pampered" -- actual dates that have occurred on "The Bachelor" -- sound more uncomfortable than anything. Watching makes us glad we date off-screen, in a world where we will never meet a romantic partner by riding in on a white horse or get dumped while standing on a glacier.

Plus, if there were ever a reason to fully let go of the Prince Charming fantasy that shows like "The Bachelor" attempt to play upon, just look at the numbers. Of all of the couples "magically" brought together on the franchise, only five are still together -- one being Chris and Whitney, who have only been publicly engaged since the end of March. Most of us would rather brave the uncomfortable waters of meeting people in bars, through friends or on Tinder than cut down our peers on national television, or "win" love and then be publicly dumped -- details of the whole messy affair splashed across the tabloids.

So instead of taking "The Bachelor" franchise too seriously or using it as any kind of model for our own conduct, we take from it exactly what it can give us -- an escape from our daily lives, a reason to appreciate our real, imperfect romances, and an excuse to drink wine on a Monday night... sans tears.

This piece is an updated version of a 2012 feature.

You can check out our future episodes of Here To Make Friends and other HuffPost Podcasts on The Huffington Post's Sound Cloud page. Thanks to our producer, Katelyn Bogucki, our editor Jorge Corona, and our guest Jay Overbye.

Also, check out the HuffPost Here To Make Friends podcast on iTunes and make sure to rate and review the show, too.