A college student's smartphone might be smart enough to figure out when its owner is stressed, and in turn, predict what kind of GPA the student has.

StudentLife, a new Android app created by researchers at Dartmouth College, tracked 48 students for 10 weeks to map out their social interactions, physical activity, sleep and stress levels. What the team found comes as no surprise to college students: As the term goes on, stress rises, while sleep, workouts, conversations and class attendance fall. 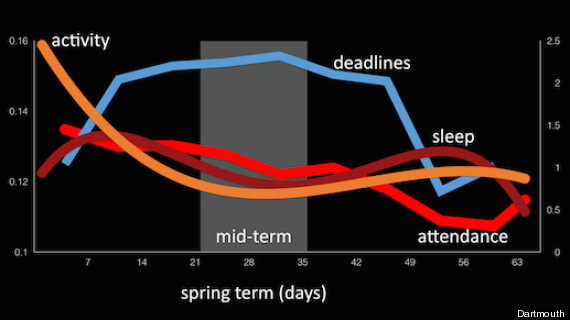 The researchers also looked at students' GPAs and asked them to take mental health surveys to see how their behavior affected academic performance and emotional well-being. They found that students who slept more or had more conversations (though not necessarily longer conversations) were less likely to be depressed. Similarly, students who were physically around other students more often were less likely to be depressed, and felt better about themselves.

Going to the gym was also a positive sign -- people who were more physically active and mobile were less lonely, researchers found. As the head of the StudentLife project, Andrew Campbell, told Wired, "This is in line with the medical literature where poor sleep habits and social isolation are symptoms of depression."

The Android app automatically detected what students were doing 24/7, without students having to tell it what they were up to. Using a combination of sensors from the phone -- including phone usage, audio, Wi-Fi and location data -- the app could tell where the student was, their physical activity level (walking, running, sitting, standing) and how much they were sleeping. And by detecting other bluetooth devices, the app could tell if a person was around other people.

Each day -- and multiple times on days near class deadlines -- students were given short surveys on the app about their feelings. At the beginning and end of the semester, they were also given surveys on their well-being. 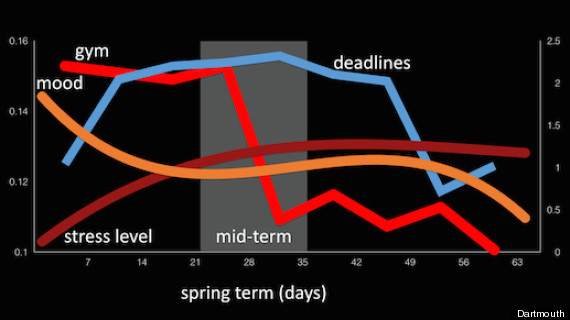 After recording the students' activity, researchers compared the data to their GPAs. The team found that better grades correlated with less physical activity, less indoor nighttime activity (like partying), and being around more people and having more conversations.

Interestingly, the data also showed that class attendance had no effect on GPA. Students who regularly went to class were no more likely to have a high GPA than students who did not regularly go to class.

"There are key behaviors that have a lot of impact on us," Campbell said.

One possible usage for the app would be for students to share some of the data with others -- clinicians, close friends or family members -- who could help watch for warning signs, Campbell said. In the future, the team hopes to expand the app, bringing it to more students and possibly going beyond schools. By constantly tracking activity, the researchers hope that the app can alert people who may be overstressed, lonely or depressed -- and trigger interventions.