Right now, at this moment, it's raining burgers in this burg. And not just any kind of burgers: smashed burgers made from freshly ground, humanely raised beef.

Danny Meyer and company were the pioneers of this style of burger in New York with the now legendary Shake Shack, though the Shackers don't really smash their meat so much as press it down rather gently. In fact, it should be noted that burger lovers owe Meyer a smashing debt of gratitude for the lead role he and his crew have taken in treating the reasonably priced burger with respect and love—and elevating it to serious deliciousness with careful preparation, cheffy techniques, and quality ingredients. But enough about the Shack for now.

Restaurateur Steve Hanson has now stepped up to the (blue) plate with his newly opened smashed burger emporium Bill's Bar and Burger. And RUB's pitmaster Scott Smith and co-owner Andrew Fischel have snuck up on Meyer and Hanson with their burger, which is currently being served only on Monday nights.

A Hamburger Today and Serious Eats have been chronicling Shake Shack's serious deliciousness for years now. More recently in the past few weeks, my man Adam Kuban waxed enthusiastically about Bill's, Kenji Alt told us how to fake the funk of the Shake Shack burger with his amazing Fake Shack post and recipe, and I had a ridiculously fabulous urban burger at RUB.

So what's left, my burger-loving compadres? Why, it's obvious to me: It's the Serious Eats New York–AHT smashed-burger roundup, the ultimate throwdown. Is there one smashed burger in New York City that reigns supreme? Which of these juicy suckers should you pledge your burger-loving allegiance to? Which burger is worth your hard-earned money, your valuable time, and your true burger devotion?

We've got you covered, starting now. 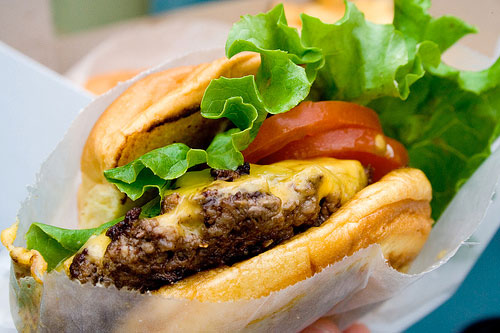 The Shake Shack burger introduced the salted, pressed, and crisped burger made with care and good ingredients to serious eaters in New York City, and we are forever in Shake Shack's gratitude. (I remember when I first got to New York in the mid '70, the burger choices were pretty meager: Prime Burger, Burger Heaven, J. G. Melon's, and the mediocre mondo-size burgers served at Jackson Hole). A recent visit to both locations found the Shack in good form.

The four-ounce Shackburgers ($4.75) (made with humanely raised, freshly ground Creekstone Farms beef custom-blended by LaFrieda Meats) were juicy (especially when ordered rare), salty, and crusty, the cheese was melted, and the bun was toasted and lightly buttered. The french fries ($2.75), made from Yukon golds, are the good-enough frozen, trans fat–free fries they've been serving for a few years now. A revelation for me on my last visit was the vanilla malted ($5.75). Made with the incomparable Shack vanilla custard and plenty of malt powder, it is the best vanilla malt to be had in New York right now. 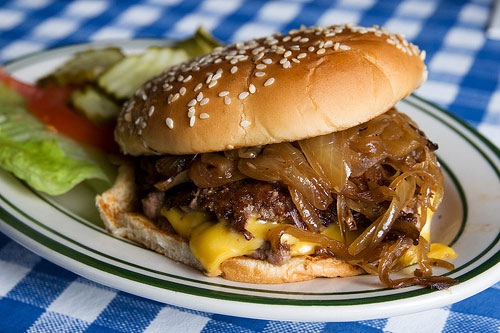 Steve Hanson claims to have worked on the Bill's Bar and Burger concept for more than a year. The burgers at Bill's are made with fresh-ground beef blended by the ubiquitous LaFrieda, are smashed onto the high-tech grill, and, at their best, they are worthy of a straight-up comparison to Shake Shack. In fact, I like the more coarsely ground (and therefore more loosely packed) Bill's blend more. Bill's burgers actually have more crunch per square inch than their Shake Shack counterparts, are very well-salted, and can also be just as juicy if you order it extra-juicy. The full-throttle smashing of the five-ounce patty means that the patty is a wide-body burger—so wide, that the patty extends well beyond the Arnold bun the burger comes on. All told, Bill's makes an extremely satisfying, intensely pleasurable, and beefy burger.

The fries are salty, seriously delicious, twice-fried Kennebec potatoes, though sometimes they become mealy if they're overcooked.

The vanilla malt, made with Mt. Pleasant ice cream, was sweet and creamy, but not very malty. 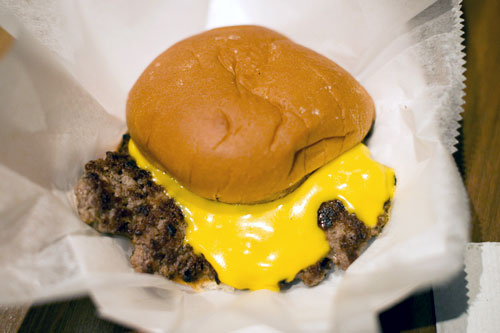 RUB pit master Scott Smith makes his burgers, currently served only on Monday nights, with equal parts brisket and short rib meat, chilled and then ground in the walk-in freezer at the restaurant. The patties are then salted and cooked individually in a super-hot 9-inch cast iron skillet. The result is a phenomenal burger that might just be the finest combination of salty, crisp, and juicy, of all the burgers I tried. It tasted like the best backyard burger you will ever eat.

They make three kinds of burger at RUB: a plain burger ($6.50), a cheeseburger ($7), and the RUB burger ($7.50), topped with sautéed, not-quite-caramelized onions, cheese, crunchy pickles, and a chipotle aioli, which is one damn fine burger.

The skin-on french fries dredged lightly in RUB's dry rub, are golden brown and crisp on the outside and tender on the inside.

Who Makes the Best Burger?

I know you want me to pick a winner here; I suppose I did promise that I would. But choosing between these three burgers is like asking someone to choose which child they love the best. I love all these burgers equally. Please don't ask me to choose. I will say that the many Shake Shack aficionados out there should try the burgers at both Bill's and RUB, and let us know in the comments which you prefer and why. Also, ordering a double burger at any of these places is unnecessary. In fact, it throws all these burgers out of balance and upsets the natural order of burger things.

As far as I'm concerned, the more burgers made with care and pride out of good ingredients, the better. Thank you, Danny Meyer, Steve Hanson, and RUB. After years of the fast food culture reducing burgers to the ultimate cheap convenience food, you have elevated burgers to their rightful place in the food pantheon.