Facebook is so over. At least, that's what a college-age coworker told me this summer while discussing arts marketing. The mega social network may be waning with a younger demographic, but a recent Facebook acquisition is growing exponentially. More than 80 million people are sharing photos on their iPhones and Android devices with Instagram.

Why the shift from status updates and timelines to bare-bones photo sharing? "We're seeing a consumer movement toward a more visual culture brought on by technology and media," wrote Antony Young on Adage.com. Facebook certainly understands the shift, going so far as to purchase Instagram for $1 billion.

Brands with visually appealing products or stories thrive in this new digital environment. And that's where the Broadway community has the upper hand. Amazing sets. Colorful costumes. Imaginative makeup. Historic venues. Nearly everything that makes up the live theater community screams visuals. Marketers get it. Broadway ads are typically overflowing with many of these elements. But that's all about broadcasting.

As companies now understand, "better customer engagement via social media will lead to increased revenue when done correctly of course," according to Forbes.com. It's the "doing it correctly" part that is always the challenge for marketers.

A few of the more playful Broadway shows have started to experiment with these networks and apps. Peter and the Starcatcher created a few mood boards on Pinterest, even launching a photo-sharing contest. It asked followers to pin a photo that best represents the Peter Pan-based play and tag it with the appropriate information. The contest resulted in 58 photos. 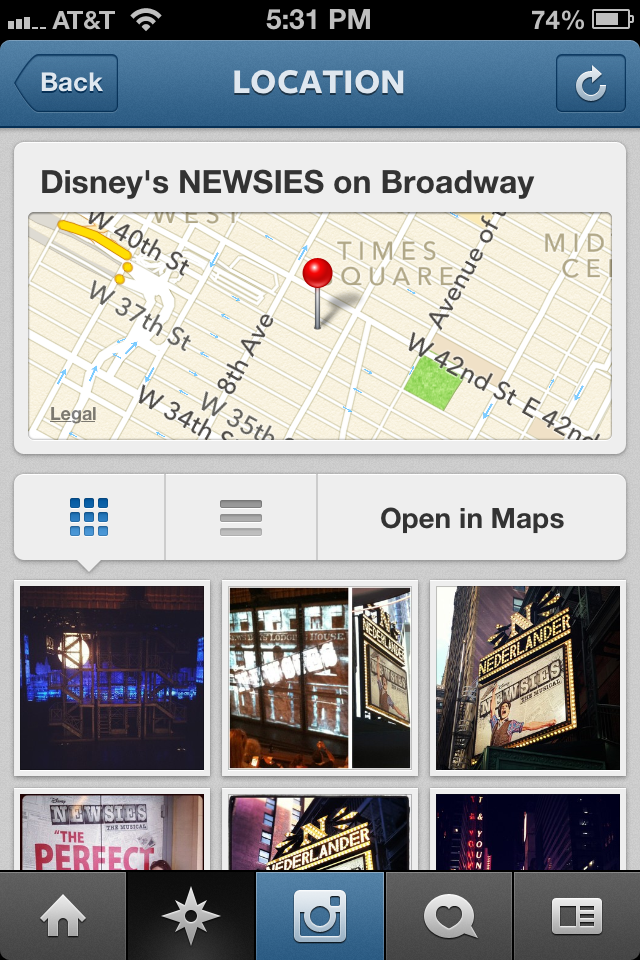 If you look to Instagram, however, it isn't cleverly edited Photoshop creations making up users' feeds; it is everyday activities snapped on an iPhone. For Broadway fans, that everyday activity is attending a show around Times Square. Photos of marquees, lottery lines, and three sheet posters in Shubert Alley are common fare for Instagram around 7:30 on a show night. But, it doesn't end there. Log onto Instagram at 8:00 p.m., and you'll see the dark side of photo sharing amongst theatergoers -- snapshots of the stage, sometimes taken during the production. Somebody call an usher!

No matter how many Playbill stuffers are printed or terse warnings delivered from an usher, nothing can stop people from taking a quick photo from their seats before the curtain rises. There are nearly 88,000 photos tagged #broadway on Instagram. Zoom in on Disney's Newsies -- photos are often geo-tagged in the app -- and every other photo seems to be a shot of the stage. In the Broadway community, that kind of activity can be troublesome.

"The scenery is intellectual property, much like a book, or a song," Beowulf Boritt, a scenic designer, told Playbill.com. "While you may not be doing anything nefarious with your snapshots, if they end up on the web, that visual information is available to anyone with a quick Google search, and the designs can essentially be stolen."

What is a social media marketing person to do? If they are doing their job correctly, they scan everything from Twitter to Instagram throughout the day in search of conversations or mentions of their product. Those with a brand account on Instagram are encouraged to "like" photos to encourage engagement and further positive mentions.

Should photos taken from inside of a theater be considered negative mentions, thus not warranting a "like"? It's a question the Broadway community needs to re-evaluate -- quickly. Beyond the social media strategies crafted by marketing departments, an image strategy is now becoming necessary.

Now that Facebook has invested in the future of Instagram, the app's activity will continue to grow. "Being able to connect with consumers at this scale is not something to be sniffed at," writes AdAge.com. Broadway's Newsies has already taken the right step in activating free Wi-Fi in the theater during intermission. Imagine what kind of buzz could be harnessed if people were allowed to upload photos to Instagram of each other proudly holding up their Playbills during intermission. I'd +1 that on Klout.