The New York Post reports on the emerging intrigue surrounding the possibility that over three-dozen young men who have died by drowning during the last decade could have all been targeted by a gang of murderers known as the "Smiley Face Killers."

Two ex-NYPD detectives doggedly probing the drowning of two New Yorkers believe they were murdered by a nationwide gang of psychopathic serial killers who have drowned 39 other young men.

Retired Detectives Kevin Gannon and Anthony Duarte say Patrick McNeill, 20, a Fordham accounting major, was killed by what they are calling the Smiley Face Gang, which they say has struck in 25 cities in 11 states since 1997.

Smiley faces - some with horns - were drawn on walls at 22 of the crime scenes in five states: Ohio, Pennsylvania, Indiana, Wisconsin and Iowa. The paint, size and shape of the faces varied.

There were other unspecified symbols at some other crimes sites, but none at all in New York.

The victims in all the cases shared roughly the same profile: young men of college age who disappeared after a night of drinking, and drowned.

MSNBC has more on the Smiley Face Killers:

It began with the 1997 death of Patrick McNeill, a young man whose body was found in the Hudson River after he had gone missing after a night on the town.[...]

Most of what the detectives are calling murders occurred in the Midwest during the winter months. Almost all involved popular athletes with good grades. Most had been drinking before they disappeared and their bodies subsequently found in near-frozen bodies of water.

The link they think they've found is a smiley-face symbol drawn near where many of the drowning victims' bodies have been discovered.

Not everyone agrees with the idea that serial killlers leave signatures. Read an article from the Crime Library about the myth of the serial killer signature.

Here is a photo of the alleged group's symbol: 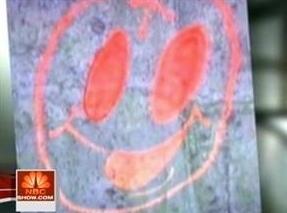 Watch a news segment on the Smiley Face Killers from the "Today Show."