What would you do if your life was a series of battles to be fought, between you and your body? How would you handle the crushing weight of a prognosis that threatens to separate you from your peers, that seems intent on holding you back from your dreams? Human nature tells us that the most common reaction would be to surrender--to live your life at the mercy of the brutal curveball thrown your way. It's natural, understandable. And that's what makes it so astounding when you meet someone who looks that same curveball in the face...and laughs.

In the short time that I've gotten to know Paula Hickey, I've found her to be a revelation. Listening to her bright, cheerful voice and her words of optimism and wisdom, it seems impossible that she is speaking to me from a hospice bed. And I found myself wondering...how is it that a woman facing death seems so much more present, more alive, than many of the healthy, able-bodied people I've met over the years? As I set out to discover Paula's secret to living with joy, in spite of the deck of cards she's been dealt, I was humbled by the realization that millions of us take for granted the privileges that Paula and so many others have never had--chief among them, the privilege of a healthy body, free from pain. Yet she has achieved the success and happiness that elude thousands of people with far less obstacles.

So what sets the fighters, the winners, apart? What makes a life truly worth living, even in the face of pain and fear? In speaking to Paula, I discovered five key traits that allowed her to write her own story--to live life on her terms.

#1. Find The Humor...In Everything
While the other kids her age were busy with school, playdates, and after-school sports, Paula was forced to spend her childhood in and out of hospitals. She endured two major heart surgeries before the age of seven, one of which resulted in her developing scoliosis after the doctors cut her breastbone to perform the surgery and subsequently realigned her spine. "So on top of being the sick kid, I had scoliosis!" Paula told me with a chuckle, as she described wearing a brace for seven years. "It sucked, but I always found the humor in it." The day after fourteen-year-old Paula was finally rid of her back brace, she had to promptly get dental braces. "That's why I can laugh-- because it's funny!" she said. And after a traumatic brain aneurysm burst in her head at age nineteen, Paula's go-to joke became, "I need that like I need a hole in my head!"

Instead of feeling sorry for herself, or self-conscious in front of her classmates, Paula took the remarkable approach of looking at life as a comedy. She was nobody's victim; she was like the star of her own quirky sitcom. And that's what drew people toward her.

#2. Let Go of What Other People Think
When your tomorrows are hanging in the balance, it becomes irrelevant what so-and-so thinks of you, or whether you're popular/pretty/cool enough. All the surface self-consciousness melts away, leaving you to be your true self...and Paula found freedom in that. "My freshman year, I shaved my head and I didn't care what anyone thought," she told me. Paula's take on adolescent cruelty and bullying? "Nothing you can say or do to me is ever going to be worse than what I've been through. So go ahead and give it your best shot--but you're never going to hurt me."

Paula's brave perspective came from hard-earned experience, but what if there was a way we could all look at the opinions of others in a similar manner? My conversations with Paula showed me that we have the power to decide the importance of what other people say, think, or do. We can just as easily choose to let it go...and, like Paula, be our true selves.

#3. As Winston Churchill said- "Never, never, never give up."
Growing up, Paula's parents told her that, due to her medical conditions, the only college she'd ever be able to attend was "the university of the kitchen table." But Paula wouldn't accept it. "I deserve better. I deserve more, I deserve the best education I can get," she insisted. And as her friends say, "If Paula wants it, she'll do anything to get it!" Sure enough, Paula made it to college--and when everyone doubted that she would graduate after her brain hemorrhage at age nineteen, which caused her to lose her math skills and regressed her reading level to that of a fifth grader, Paula was resolute in her desire to not be a statistic. "I was determined to make something of my life, so I picked myself up and graduated college within three-and-a-half years... I've never given up. I've always kicked my own butt."

No one expected Paula to work, either, but she dreamed of having a career. She worked as a Human Resources consultant for ten years, flying across the country and growing from four clients to three-hundred, all while never disclosing her illness. When she was finally forced to go on long-term disability, Paula's boss was shocked to learn that she was sick. She never made it a defining characteristic, because, as she told me- "I never wanted anyone to treat me differently."

If there was ever someone with a perfectly good excuse to drop out of school, to not bother working, it was Paula--and yet she once again refused to be a victim, refused to give up on the life she deserved. Her story is a reminder to always get back up after a fall, to keep pushing yourself and your life as far as you can. To never, never, never give up.

#4. The Power of Selflessness
Paula married her high-school sweetheart and best friend, Sean, and the couple experienced several years of wedded bliss. But as time went on, Paula was increasingly troubled by the sensation of the clock ticking. Not her clock...his. She couldn't forget something Sean had told her back when they were kids playing in the park: that his dream was to find the perfect mother for his children. Paula's medical conditions meant that she wouldn't be able to have children, and she was terrified that she would leave him widowed at a time when it would be too late for him to find someone new and start a family. Incredibly, her love for Sean superseded any of her own self-interests. "I saw City Slickers soon after my brain hemorrhage, and there's a great line in there about how everyone should get a do-over. I thought about that all the time--that Sean needs a do-over," Paula told me. "I don't get a do-over, but he gets a do-over, and I owe him that." And so Paula asked him for a divorce.

"I love him now more than I did before, because I love to watch him be a husband and a father," Paula said, her voice filled with emotion. "It just warms my heart... It gives me such great comfort." They remain best friends today.

This is what I found most incredible about Paula--that she is the living embodiment of finding joy in the happiness of others. It's a rare person who can make the sacrifice Paula did, and I doubt I will ever meet someone so selfless again. But something it taught me in my own life, is to look at relationships from the point of view of, "What can I give?" rather than "What can I get?"

#5. Gratitude
When I asked Paula what is the one thing she would like to leave people with, her answer blew me away.

You wouldn't expect those four words from a woman who is facing the untimely end of her life. You wouldn't expect it from someone who had to struggle with sickness since childhood. And yet, she has an appreciation and a true gratitude for life. She is grateful for each and every day, and makes the most of it.

Imagine what we could do, be, and experience if we all looked at life the same way. This is my goal from here on out: to look at life the way Paula does, with the eyes of appreciation.

Will you join me? 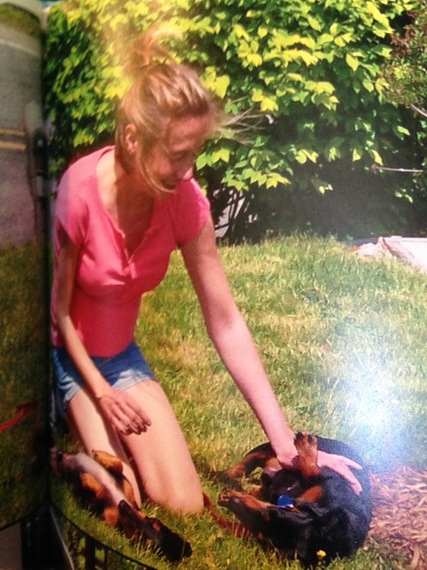 * Paula and I were introduced by Dream Foundation, the only national dream-granting organization for terminally-ill adults. For more information, please visit dreamfoundation.org

Download
Calling all HuffPost superfans!
Sign up for membership to become a founding member and help shape HuffPost's next chapter
Join HuffPost
Follow Alexandra Monir on Twitter: www.twitter.com/@TimelessAlex
Voting Made Easy
Register to vote and apply for an absentee ballot today
Register now