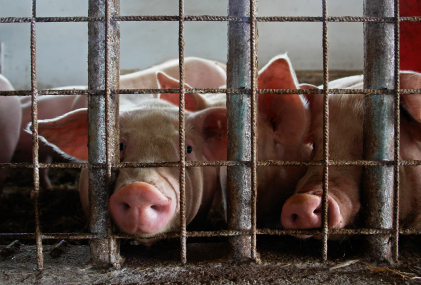 Well, it's official: the United States of America is on its way to becoming China's cesspool. Or the world's largest "CAFO"...

As reported by almost every major media outlet, Smithfield Foods -- the nation's biggest pork producer -- is being sold to Shuanghui International, one of China's biggest meat processors, for $7.1 billion (including assumed debts). According to the New York Times, it's the largest takeover to date of an American company by a Chinese rival.

Yet despite all the positive spin that we're hearing about the purported benefits of this deal, I believe it's nothing but more bad news for American farmers and consumers, our environment, and our long-suffering national pig herd. The bottom line is that this acquisition will potentially give a Chinese-controlled mega-corporation the green light to dramatically increase the number of intensively farmed pigs on U.S. soil -- with all the associated environmental pollution and health impacts on local communities -- and then export the meat to feed China's inexorable appetite for pork. Does that sound like a good deal for America to you?

Recent reports indicate that meat consumption in the U.S. -- particularly pork -- has been declining steadily for years. According to the latest figures from the U.S. Department of Agriculture (USDA), the average American will have consumed 12.2 percent less meat and poultry in 2012 than in 2007 . While a number of factors are likely to be at play, the growing public awareness of the impact of industrial livestock farming on our health, animal welfare, and the environment has undoubtedly had a role in this decline in demand.

According to the influential Earth Policy Institute, more than a quarter of all the meat produced worldwide is now eaten in China -- and the country's 1.35 billion people are hungry for more. Today, China's annual meat consumption is more than double that in the U.S. The Iowa Farmer Today states that China was the sixth-largest buyer of pork from the U.S. in 2006, representing five percent of U.S. exports, but it moved to the third-largest buyer by 2011, representing 15 percent of U.S. exports. USDA figures also show that this trend has continued into 2012: "Chinese imports of U.S. pork products in April were almost three times higher than a year ago."

With such massive Chinese demand, there's no denying that this deal will benefit the Smithfield board and its shareholders. It's widely accepted that the company has seen better days; the $7.1 billion purchase assumes almost $2.5 billion debts. So with U.S. meat consumption falling and Chinese consumption rising, expanding the number of so-called concentrated animal-feeding operations (CAFOs) in the U.S. to meet Chinese demand for cheap pork makes perfect business sense for Smithfield. The trouble is U.S. citizens will be the ones who will once again pick up the environmental and health check.

Before anyone misinterprets my argument as somehow xenophobic, I want to make it crystal clear that I'm not suggesting for one second this take-over will result in a sudden decline in U.S. pork production standards, as some commentators already have. No, no, no... from where I'm standing, the standards in some of our industrial production systems couldn't get much lower. My point is that the deal between Smithfield and Shuanghui International is simply going to make an already appalling situation a whole lot worse.

U.S. industrial hog operations already produce vast quantities of concentrated waste called swine effluent, a toxic concoction of pig feces, heavy metals, bacteria, and of course, residues from the concoction of antibiotics and other pharmaceuticals that are given to the pigs to keep them alive in the CAFOs' confined conditions. Most U.S. factory farms pump this swine effluent in vast open lagoons or cesspools. Some are as big as several football fields, each holding hundreds of thousands -- if not millions -- of gallons of putrefying swine effluent. Because this effluent is expensive to store or treat, it's periodically pumped and sprayed on surrounding fields. The problem is that it is often sprayed at such high application rates or so often that the soil and plants cannot even begin to absorb it, let alone actually utilize it. This level of over-application frequently leads to highly toxic runoff, which finds its way into our waterways and groundwater systems, polluting our drinking water and rivers, and leaving our waterways dead. A review of the impacts of waste from U.S. CAFOs on water quality published in 2007 found that the "generally accepted livestock waste-management practices do not adequately or effectively protect water resources from contamination with excessive nutrients, microbial pathogens, and pharmaceuticals present in the waste."

Recent research has also revealed that the toxic emissions from U.S. industrial hog operations --including gases, fecal waste dust, and bacteria -- are causing serious adverse health effects on U.S. citizens and making their lives miserable. A March 2011 paper published in the journal Epidemiology examined the health of residents in 16 communities in a region of North Carolina that is densely populated with industrial hog operations. The researchers looked at the associations of reported hog odor and monitored air pollutants with the physical symptoms and lung function of people living within 1.5 miles of hog operations. They found that air pollutants from the hog operations were causing acute physical symptoms, including eye and nasal irritation, respiratory symptoms, difficulty breathing, wheezing, chest tightness, and nausea, among other symptoms. The evidence was so great that the researchers concluded, "Exposure to air pollution from hog operations is an environmental injustice in rural areas hosting facilities that supply pork to populations spared the burdens of its production."

The Chinese are only too aware of the environmental and health problems associated with any rapid expansion of existing intensive pig production in their country. A recent USDA report, entitled "China's Volatile Pork Industry," stated that "Producing large quantities of pork in China entails 'external' costs -- the environmental impacts of hog waste and risks of food safety incidents -- that are not factored into the market price of pork." Let's also bear in mind that the Chinese already prohibit the use of ractopamine in their domestic pork production -- a growth promoter drug that is currently used on up to 80 percent of the U.S. pig herd, but which is also banned in the European Union, Taiwan, and more than 100 other countries because of concerns about the effect of ractopamine residues in meat on human health. So it would appear that China is happy to take over a major U.S. corporation in order to secure supplies of cheap meat, thereby avoiding the associated "external costs" for their own citizens and environment. The problem is the Smithfield take-over will almost certainly lead to a further expansion of existing U.S. intensive livestock production, further compounding the inherent pollution and health problems outlined above. But this time, the pork produced will be exported to feed Chinese people, not Americans. Not to mention any profit.

Don't for one second think that this deal will somehow benefit U.S. pork producers in the longer term. History already shows us that consolidation of the pork industry here has resulted in most U.S. pork farmers becoming nothing more than indentured servants, pandering to the every whim of their corporate agribusiness masters. Far from being independent businesses, most U.S. pig farms now operate under strict 'captive supply' contracts, where the livestock being farmed are owned outright by a corporation or where their management is strictly controlled through a contract with the farmer -- and Smithfield is renowned for being one of the worst culprits. Read chapter 9, "Hogging the profits" in Wenonah Hauter's excellent new book, Foodopoly if you're in any doubt. Larry Pope, Smithfield chief executive, recently said the deal won't change how the company does business: "It will be business as usual -- only better -- at Smithfield. We do not anticipate any changes in how we do business operationally in the United States and throughout the world." I bet the irony wasn't lost on the many thousands of struggling U.S. hog producers that are contracted to Smithfield.

Despite the ever-growing concern among U.S. consumers about the impact of intensive livestock operations on our health and the local environment, the nation's largest pork producer has sold out to meet the growing Chinese demand for cheap pork -- and it is more than happy to pollute our environment and harm our health in doing so. But at least it's now amply clear to us all that Smithfield was never really concerned about feeding America sustainably or protecting the environment, as it claimed. No, the real aim was to grow as quickly as possible and to protect its own business interests while maximizing profits -- regardless of the costs.