Architects and environmental scientists have been teaming up to address an interesting question: is it possible--and economically feasible--to design and construct buildings that can passively clean smoggy urban air?

As it turns out, relatively straightforward chemical reactions to improve air quality can be triggered with a little help from the sun. Add some clever design, and you're most of the way there. It's already happening in famously smoggy Mexico City, where a hospital building called the Torre de Especialidades is shielded by an eye-catching 100-yard-long façade made with special tiles that have air-scrubbing abilities. 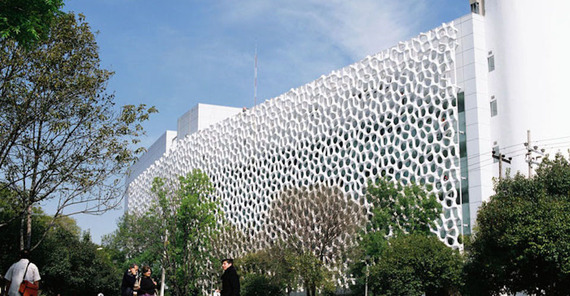 The façade of the Torre de Especialidades sucks up pollution in Mexico City. (Source: Elegant Embellishments)

The mass-produced tiles, created by Berlin-based architecture firm Elegant Embellishments, are coated with titanium dioxide, a pigment that can act as a catalyst for chemical reactions when it's activated by sunlight. When UV rays hit the tiles, a reaction occurs, converting mono-nitrogen oxides (the substances that makes smog smoggy) into less harmful substances such as calcium nitrate and water, along with some not-so-wonderful carbon dioxide. The titanium dioxide in the tiles doesn't change; it can keep on doing its thing indefinitely.

The architects don't claim to be solving a citywide problem, but their intentions are sincere, and they hope to inspire others to follow their lead. Their modest hope is that the building can counteract the impact of about 1,000 of Mexico City's 5.5 million cars and provide slightly fresher air in the hospital's immediate area. 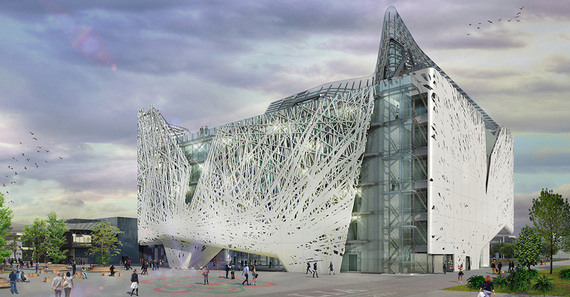 The Italian Pavilion at Expo 2015 in Milan will act as a smog scrubber. (Source: Nemesi & Partners)

Meanwhile, the city of Milan is prepping for a world's fair this May around the theme of "Feeding the Planet, Energy for Life." As the host country, Italy is putting some extra oomph behind its pavilion, constructing it with 9,000 square meters of photocatalytic concrete that has titanium dioxide mixed in. Like the hospital in Mexico City, the building will be able to break down nitric and nitrogen oxides when it's hit by sunlight. Nemesi & Partners, the architectural firm, says it wants the building to resemble a petrified forest, and it will include a rooftop solar array to power itself during the day.

This type of concrete, sometimes called Tiocem, can be used not only for buildings but also for paving, in roofing tiles, for road construction and in highway sound buffering walls. Already validated by European Union studies, expect to see it proliferate to smoggy urban areas worldwide. Any interest, Beijing?

Concerned about the environment? Click here for more XPRIZE Grand Challenges and to vote on future prizes. You can also sign up for our newsletter or donate today!