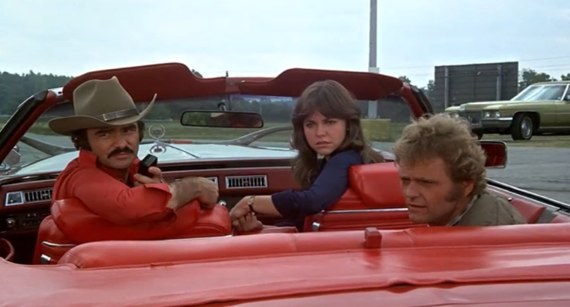 To be honest, this piece was supposed to be about the little seen and barely remembered Hal Needham film, Megaforce. Unfortunately, I haven't seen Megaforce in over 25 years and finding a copy of that film today is fairly difficult. Chances are you've never heard of Megaforce. Here, watch this trailer and you'll have a pretty clear idea.

Now, as a child, I loved Megaforce. I have a feeling that re-watching now as an adult is probably not the best idea if I'd like to keep those sentiments. "The good guys always win, even in the '80s!" Yikes. (Oh: and spoiler alert, I'm sure.) In other words, the idea behind this piece and the one that Ain't It Cool News writer Jeremy Smith (a.k.a. Mr. Beaks) posted today on Hooper is to pay tribute to a Hal Needham, a director who brought much joy to the young versions of ourselves -- not to bemoan, "Good God, that didn't hold up." Thankfully, instead of taking a risk with Megaforce, I chose Smokey and the Bandit.

The interesting thing about Smokey and the Bandit (Needham's directorial debut after coming up in Hollywood as a stuntman) is the moment when I realized just how long it's been since I've seen Smokey and the Bandit from start to finish, unedited. (Oh, yes, that's quite the important part: unedited.) Even with Bandit, I was worried that, today, I just simply wouldn't like it -- that it would now join the discard pile of "things I only liked when I was a kid," like Fun Dip and Superfudge. The good news!: Smokey and the Bandit is great.

Hal Needham is never going to be misidentified as an auteur. Even that last sentence looks so ridiculous that I'm currently involved in an internal debate over whether to delete it or not. (If you're reading this, you know which side won.) The greatness of Smokey and the Bandit is just how simple it is -- so simple, in fact, the lyrics of "East Bound and Down" pretty much sum up the entire plot. (Even switching the word "west" to "east," depending on what direction the characters happen to be driving.)

The gist (because you already know this): The Bandit (Burt Reynolds) and Snowman (Jerry Reed) accept a bet to drive from Atlanta, GA, to Texarkana, TX, and back -- and bring back with them 400 cases of Coors for reasons I still don't understand. (I mean, I understand that at the time it was illegal to sell Coors west of the Mississippi river -- I just don't understand because Coors doesn't taste that particularly great.) And this had to be done in under 28 hours. (According to Google maps, this round trip would, today, take a normal human being 24 hours and 22 minutes to complete if he or she drove at the speed limit nonstop. I assume this is because the American highway system has improved drastically over the last 35 years, not because the Bandit didn't really drive that fast after all.) Oh, along the way, they meet Frog (Sally Field) who ... well, it doesn't really matter, they just do. (Also, after watching how young and spirited Sally Field is in Smokey and the Bandit, I'm not 100 percent sure that I want to live in a world in which Sally Field just played Aunt May.)

Again, there's nothing complicated going on here. But, boy, it's still fun to watch. And Needham should get his due for making -- what's in essence a simpleton movie -- into something great. This movie really has no business being watchable, but, for whatever reason, it worked. He let his actors have a good time and that just emotes off of the screen. Good grief, Jackie Gleason seems to be having the time of his life as the ornery (and possibly slightly racist) Buford T. Justice. I mean, this movie really is just one long car chase. But that's the beauty of Smokey and the Bandit: Instead of trying to shoehorn a car chase into the plot, why not just give the title character the profession of "guy who gets chased by police cars for a living." (Plus, I defy you to find me any other movie that has both an Elton John reference and a Broderick Crawford reference.)

Last week, after the death of Tony Scott, the Internet reacted with a deluge of "Tony Scott made some fun movies that I like"-type pieces (including my own). But I couldn't help but feel some underlying guilt. A feeling of why didn't I ever write this when Tony Scott was alive? So, yes, that's why we did this. To say, "Thanks, Hal Needham. You made some movies that entertained me greatly over the years." Now, having said that, maybe it's time to track down Megaforce and take my chances.