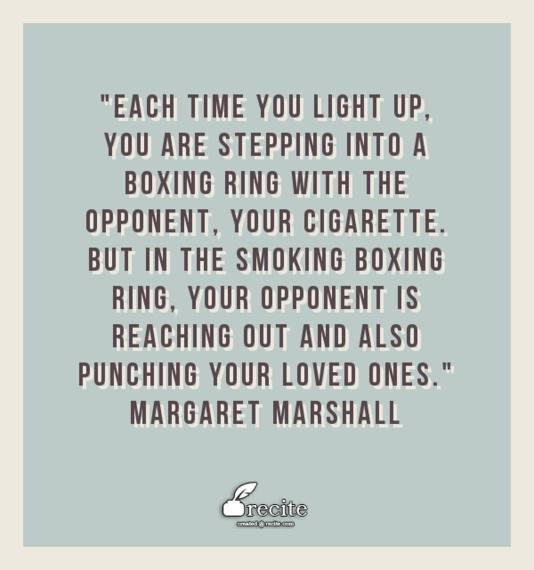 Most of the smoke from a burning cigarette doesn't go into the smoker's lungs; it's in the air where it is inhaled by others, and the effect of second-hand smoke is a significant health risk for those who are unfortunate to be near the smoker.

Smoking Cessation without Weight Gain is a corporate wellness program I offer. While doing this program I've heard the most amazing stories related to people quitting smoking. One young man, age 29, thought it was normal to taste blood in his throat throughout his day. Really! He also confided that smoking affects his ability to date. "In the dating world", he said, "the only girls who will date me are smokers." He claims the dating world is complicated and being a smoker makes it more difficult. Can you guess which factor motivated him to quit? Not the taste of blood; the dating scene.

It doesn't matter what motivates you, just find your motivation.

A middle aged woman, who tried unsuccessfully to quit many times, found her motivation when her teenage son was called to the principal's office in school. His teacher accused him of smoking because he smelled of smoke throughout the school day. That motivated her.

In one company, a women in her 60's came to our meeting fifteen minutes early one day. She asked if she could speak to me privately before her co-workers arrived. She then confided to me that this was the first time in her life she had attempted to quit and she'd been smoking since her teens. She went on to tell me that her son, her only child, was in a very serious car accident when he was 21. She received the call in the middle of the night that all parents dread: "Come to the hospital." She hurriedly got herself together and got to the emergency room where she was met her son's doctors. Their very first question was, "How much does he smoke?" Shocked by this question, she answered, "No, he doesn't smoke." The doctor's informed her that they had just drained his lungs, and he had the lungs of a smoker. "I'll never forget" she said, "how I felt when I had to tell the doctors, 'I'm the smoker, it's my smoke.'" She carried this guilt with her for over twenty years, and had never told anyone about it. Releasing herself from that guilt was her motivation to quit.

One thing I teach in Smoking Cessation without Weight Gain is to look at the cigarette as your opponent. Each time you light up, you are stepping into a boxing ring with the opponent, your cigarette. But in the smoking boxing ring, your opponent is reaching out and also punching your loved ones. Your cigarettes harm you and everyone around you. One day when you least expect it, the unhealthy consequence will show on someone you love.

If smoking is so dangerous to the smoker and the people close to them, why do people still smoke, and why don't they just stop? Along with being addictive, one of the major fears people have about quitting is weight gain. As you quit smoking, your metabolism slows and your taste buds are aroused. You now taste food differently, making it more enjoyable. Food will also replace the hand-to-mouth motion the smoker is missing, and there is a void feeling in the air passages that the smoker is not accustomed to. Often they feed that feeling.

The time to lose weight is not as you quit smoking. There will be time for that later, if needed. Just focus on not gaining weight:

I advise people, if you don't quit smoking, smoking will quit you. The tobacco addiction is hard to overcome but you can change your way and become addicted to life, fresh air, and deep breathing.

Find your motivation, change your way, and quit today. Everyone benefits!