In October of 2014 a novella was sent to Fogged Clarity, the arts review I edit along with the web designer Ryan Daly. The novella arrived as an attachment in an email with no cover letter, author biography, or additional contact information. One's first impulse in such instances is to dismiss the material submitted entirely--if the author doesn't have the time to pen at least a brief cover letter, one questions whether they had the time to write a novella worth reading. In spite of this, I opened the attachment and was subsequently blown away. I read and reread the novella--entitled Smoking Monkeys--trying to convince myself, over the course of three readings, that it wasn't as good as I suspected. The endeavor proved futile; thus commenced a nearly two-year process of putting the story in print.

A locomotive chugging on Crisco-ed rails, the narrative voice in Smoking Monkeys remains, for me, the novella's most arresting aspect. The book can be likened to a pre-wound set of chattering teeth that, for 49 pages, doesn't stop clacking at the vacant air of human lack. This may sound unpleasant. It is not. There is a cadence to the chatter, and, in it, no shortage of humor, intellect, or plot. Think a hybrid of Hunter S. Thompson and Sam Lipsyte, pickled and fresh off an MFA in Theater at Brandeis, and you're in the ballpark of one Shepard McEvoy--the relapsed alcoholic narrator of Smoking Monkeys. Here's McEvoy depicting Houten Falls, the fictitious town in New Jersey where the novella is set:

"In fact, if a river could shit a town, Houten Falls would be it; if a slurry of silt, mud and dead things could wash ashore in some wizardly, perverse act of creation and erect muck castles in the shape of a city grid, all would be explained. The waterfall itself, to the judicious-eyed, is vastly underwhelming, only middling tall and viewable primarily from an infelicitous angle. It's a lackluster piano recital at a dinner party by your hosts' ungifted child."

Smoking Monkey's is an indulgent, associative prose consistently inventive and fierce enough to keep the game from wearing thin. This was my opinion, and the reason I asked the novella's author, Rick Ewing, if he'd be willing to speak on the phone shortly after accepting the piece. Given the novella's accomplishment I was surprised I had never heard of, and could not locate on Google, an author named Rick Ewing.

Ewing's voice was smoke-cured with a hint of rasp, and I wasn't surprised to later learn that he once did voiceovers for radio commercials. The first thing I asked him was how he managed to craft such an electric narrative voice; a voice that seemed authentic past the point of conscious invention. He replied that Shepard McEvoy was, essentially, Rick Ewing; that Rick Ewing, like Shepard McEvoy, had "drunk himself into the toilet", become homeless, and had been in and out of rehabilitation programs between New York and New Jersey over the course of five years. Ewing said he had written Smoking Monkeys in a period of 6 months, using a local library's computer while living at the Bellevue Men's Shelter in the Murray Hill section of Manhattan. I learned further that he had previously published a handful of short stories in small journals, that he grew up in Pennsylvania, held two fine arts degrees in Theater and once ran his own Theater program at a small university before joining a proxy firm on Wall Street. 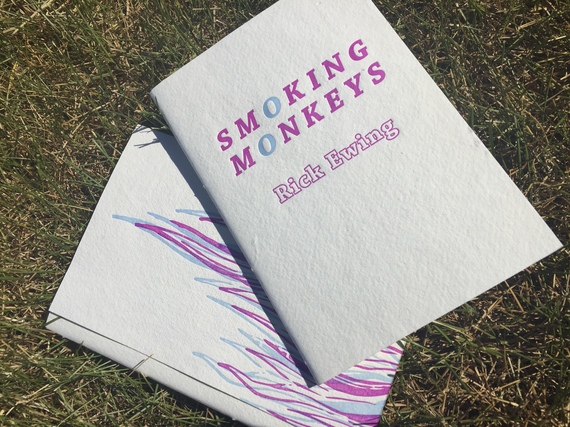 Ewing's novella became a kind of obsession for me. Knowing its history, I came more and more to admire its clarity and bravery; the way in which its brilliance and being seemed to vindicate the suffering that preceded it. If I'm honest with myself, I liked it, too, because it spoke to and reflected some of my own alcoholic tendencies, namely my propensity to drink to excess, become garrulous and spout freewheeling associative comedic rants to all within earshot. I liked, not that Smoking Monkeys glamorized alcoholism, but that it revealed drunkenness for what it can--for better or worse--be for an intellectual: a means to pour forth long-held frustrations while, amply and without filter, invoking one's accrued store of cultural and artistic knowledge that, otherwise, goes too often wasted in the wash of day-to-day living. Call it liquid courage or catharsis but there is a certain lyric license that can come with inebriation which, if harnessed, can yield special things.

Ewing wasn't drunk while writing Smoking Monkeys, but tells me he did have to reenter that psychic state in order to render McEvoy. In a recent interview he claimed the story was a way to reckon with, and clarify, both his homelessness on the streets of Patterson, New Jersey, and the self-destruction of his friend and occasional drinking partner--a sociopathic Kenyan expat who, in the story, goes by Celeste Wangai. Via an email correspondence with Ewing I learned that the inspiration for the Celeste character in "Smoking Monkeys" died in June 2015, she was 34. Her obituary lists her death as occurring after a short illness, but Ewing related this to me: "I'm certain whatever got her medically was a result of her successful effort to drink herself to death. We got seriously fucked up a few times blaring Gin Blossoms. I pray this (the novella) gets to be read."

The book itself is a work of art--Smoking Monkeys is letterpress printed, designed, & sewn by hand, featuring Chaparral typefaces on Khadi handmade sheets. Each copy is a reminder that beauty can, and often does, emerge from the blackness; a reminder that one can descend into hell and live to write, meaningfully, about it. Only 150 copies of Smoking Monkeys exist, they can be purchased below.

Smoking Monkeys can be purchased here.