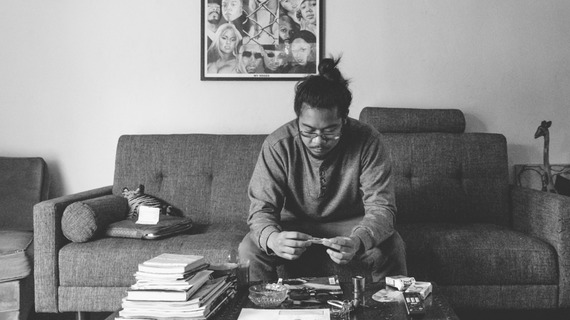 ["Smoking With" is a recurring feature where I venture to different locations and visit celebrities, musicians, and the like to smoke weed, talk careers, and casual stoner nonsense.]

Mndsgn (pronounced 'mind design') is an L.A. based hip hop producer signed to Stones Throw Records, but don't let the term 'hip-hop' marginalize the variety of his music. Mndsgn's signature sound ranges across numerous genres and influences that work in unison to create his multi-faceted, trademark vibes . As such, his unique sound has garnered a wide fan base only made more international by his overseas tour with label Stones Throw through Japan and later Europe in 2014 and 2015, respectively.

This year marks Stone Throw's 20th anniversary, and the label is celebrating with a U.S. tour. Mndsgn performs along with fellow signee's J-Rocc, Samiyam, and Peanut Butter Wolf on this tour, with Brooklyn Bowl located in Williamsburg being one of their pit stops. This is where I got to smoke a few blunts and catch up with the prolific producer.

We walked from the venue along with Mndsgn's Princeton buddy, who contributed to the cypher with a joint of his own. We sparked up behind a repurposed supermarket food truck on a one-way road by the docks, overlooking the luminous skyscrapers of Manhattan Island in the night sky, with the One World Trade Center in the heart of the scenery. We made conversation of the tower, the suspicious soapbox fixed with a microphone next to us, and Mndsgn's recent Chicago visit. The interview began mid-conversation amongst the weed smoke and Camel's Mndsgn lit between sessions, with rotation never breaking.

Isaac: I'm gonna start off with a strange question, what is your favorite episode of Martin?
Mndsgn: (laughs) I don't know, there are so many good ones...it's hard to pick.

A lot of people say that but for me? The episode when they're snowed in is perfect, and it's a bottle episode. They don't move outside the living room, but you get Hustle Man, you get Bruh Man, it's great. I asked Knxwledge (another Stones Throw artist) on a Reddit AMA his favorite episode; he laughed and said all of 'em.
Yeah, I feel the same way. Maybe the Biggie episode?

Being such a big fan of Martin, what made you and Koreatown Oddity make this group called 'Vivians' based off the character Vivian Banks and a beat tape based off samples in The Fresh Prince of Bel-Air series?
I was always a huge fan of Fresh Prince, it was more family friendly. Martin I didn't get into until I got older, but Fresh Prince I'd watch all the time. It was easier for a kid to watch around the house, you know? But I actually just hit him up with the idea, I thought it was a dope idea. He's a fan too. When I thought of the concept, I knew Dominique (Koreatown) was the perfect person for it. It had been in the making for like a year and a half before any music was released.

Who knew there were so many samples to choose from in Fresh Prince! The one track "Awwwh", I dunno if you produced that particular track or not, but y'all flip the fucking sad music they use in transitioning scenes, it's so hard. Did you have particular samples you knew you wanted to use out the gate?
Yeah! (hums melody) Nah, I didn't have any [samples] in mind. It had been awhile since I ran through the whole series and it was hard digging through the series for them because...you wanna stop and just watch the episode, y'know?

So we're here at Brooklyn Bowl for Stones Throw's 20th Anniversary. How does it feel to be apart of a label you grew up infatuated with on its 20th anniversary? They've also provided the chance to you to tour internationally, what's that been like as well?

It's crazy. I was into bebop before all of this, like in middle school. And I'd known them for this one track that was the perfect bebop breakdance track. Then later on as I got older, I started digging through all the amazing artists they had signed. And to be apart of the label, it's dope that now I know all these people I listened to, and I get to see the inner workings of their music. It's cool how my earlier passion sprouts from the same place my music making passion came from, and now I'm a part of it. As far as traveling goes, it's been incredible.

Has there been a favorite place you've performed overseas?
Probably Japan.

Yeah, that's like, the dream place to visit for every kid who grew up loving geek shit.
Yeah, ever since I was a kid I wanted to go. I'm a fan of all that shit, the video games, Metal Gear Solid...

Oh yeah? You play the new one?
Nah, I fell off of Metal Gear a long time ago (laughs). But, yeah, Final Fantasy (points to my FF shirt)...all that shit. So to go was cool. When I got there it was like "I'm home!"

2016 has been host to so much beat music? Whatever you wanna call this type of music. Kaytranada's 99.9%, Cakedog's Champion's even though it's an EP, as well as Devonwho's Lyons.
Well there's this one guy, signed to Akashik Records...

And that's your label, right?
Right. Me, Sofie, and Alima [created it]. His name is Jamma-Dee. We're working on some stuff, and Alima is actually directing a music video for his new release. Really digging his stuff lately. He's got a real unique sound. I'm also digging Swarvy.

Lastly, when are we gonna get some new music from you? I'm loving the collabs you're doing, but I need my Mndsgn fix.
(laughs) Well I have an album right now currently being mixed, and I'm probably gonna do a U.S. tour of it since I didn't do one for Yawn Zen.

What can we expect from it?
A lot of throwback vibes, 80's smooth, oldhead-type shit. More vocal work as well, which has been like a new instrument to master.

You on your "grown and sexy" shit?
(laughs) I mean, a little. I think this is my most expansive effort. Having really studied the inner workings-the fundamentals of music since my last album [Yawn Zen], it shows a lot on this new release. I've been able to open up new channels to express music by doing so, it's only made my canvas bigger. Or it's only given me more colors to work with.
_
You can hear music from Mndsgn here:
https://mndsgn.bandcamp.com/
https://akashik-records.bandcamp.com/