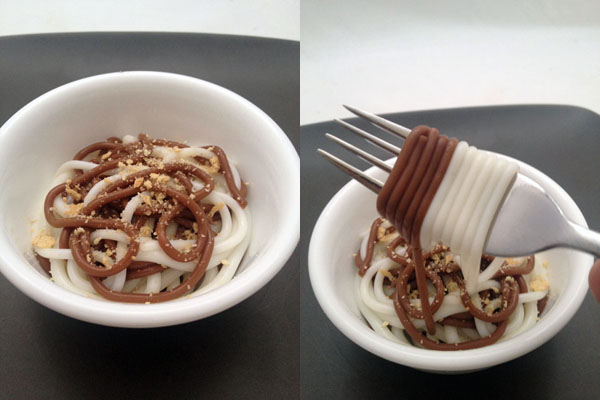 Are you sick and tired of traditional s'mores? Perhaps there just hasn't been as much innovation in the world of chocolate, marshmallow and graham crackers as you'd like. Well, why not try some s'mores spaghetti?

The brown "noodles" you see in the pictures are really made of Hershey's chocolate. The white ones? Melted marshmallow. Topping it all off are a couple crushed up graham crackers.

The mixture is then sucked up into a plastic syringe and injected into plastic tubing, which is placed in a bowl of ice water to allow the spaghetti to set. After a few minutes air is injected back into the plastic tubes thus pushing the finished noodles out the other end.

The great thing about agar powder is that it's completely tasteless, so when biting into the s'mores spaghetti all that your taste buds are met with are the flavors of chocolate and marshmallow.