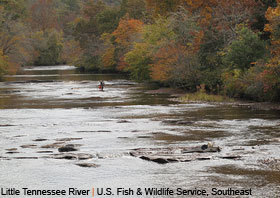 As California is enduring the worst drought in its history, some politicians are blaming it all on federal and state environmental laws that protect fish and wildlife and the rivers they depend on for survival. And, as predictably as water flows downstream, these politicians are looking for oddly-named and seemingly insignificant creatures to cast as villains. Thus, in a February 5, 2014 speech on the floor of the U.S. House of Representatives, Congressman Devin Nunes (R-CA) referred to the threatened delta smelt as "the stupid little fish" whose protection is causing Central Valley farms to dry up and wither away. Call it snail darter politics.

Remember the snail darter? The little fish that brought the construction of a multimillion dollar federal hydroelectric project to a screeching halt in the 1970's? Even if you're not old enough to remember the Carter Administration, you've probably heard of the snail darter. But you probably don't know the whole story. For that, you will need to turn to a terrific book, The Snail Darter and the Dam: How Pork Barrel Politics Endangered a Little Fish and Killed a River, by Zygmunt J. B Plater (Yale University Press 2013).

Despite this, the free-flowing Little Tennessee was marked for extinction by the construction of Tellico Dam. Building the dam was the Tennessee Valley Authority (TVA), the mammoth federal agency that, out of the depths of the Depression in the 1930's, literally brought light and power to the Tennessee and Cumberland basins. As Plater eloquently describes in his book, Tellico Dam made neither environmental nor economic sense, but that did not deter either TVA or Congress from pouring millions of dollars into the project.

Standing up to TVA was a small but determined group of farmers, anglers, scientists, law students, and activists, represented by Plater. Over a few years, this group, with assistance from a few national conservation organizations including, I am proud to say, my organization, American Rivers, learned to navigate the corridors of power in Washington to press their fight to save the Little Tennessee River and the snail darter. Eventually, the case went all the way to the U.S. Supreme Court which, in a landmark decision in TVA v. Hill, held that by enacting the Endangered Species Act, Congress intended endangered species to be given the highest priority, even above completion of a nearly-finished multimillion dollar dam. Thus, it appeared that the snail darter had won and the Little Tennessee River was saved.

Of course, as Yogi Berra reportedly said, "It ain't over 'til it's over." Reacting to the Supreme Court's decision, Congress created a Cabinet-level body, the Endangered Species Committee (commonly referred to as the "God Committee") to decide whether Tellico Dam and future projects should be granted an exemption from the Endangered Species Act. When the Committee met to consider an exemption for Tellico Dam, it quickly determined that the project was an economic loser, quite apart from its environmental cost, and denied the exemption. Finally, TVA's political patrons in Congress, led by Senator Howard Baker (R-TN), slipped through a rider on an appropriations bill allowing Tellico Dam to be completed. The Little Tennessee River was lost and, although the snail darter was transplanted to other streams and found in a few others, the clean, free-flowing river in which it evolved was destroyed.

In the nearly four decades since the Little Tennessee River was lost, the real story of the river and its value to the farmers who lived along it, the Cherokee who held it sacred, and the anglers who traveled for miles to cast a fly in its clear, trout-rich waters, has been largely forgotten. In its place, the fight to save the snail darter has been lampooned as the archetype of environmental extremism, putting the needs of a tiny fish over those of people. As Plater's book reveals, that story is wrong but still resonates today.

As global climate change continues, we will see more frequent and more severe droughts, reduced river flows, and greater conflict over leaving sufficient water in rivers to sustain fish and wildlife and the rivers themselves. Whenever there is conflict over a river, and how its water should be used, the ghost of the snail darter looms again. It is convenient for those who favor damming and diverting water from our rivers to paint a picture in which the choice is for either people or fish, particularly if it is just a "stupid little fish" like the snail darter or the delta smelt. As these conflicts deepen, it will be increasingly important to remember that the fight over the snail darter was more than just a fight to save a tiny fish. It was a fight to save a river, one that was itself endangered and crucial to the lives, livelihoods, and heritage of the people who loved it. Thus, the true lesson of the snail darter is that when we fight to save a river, we fight to save part of ourselves.