It's not much to look at. The structure actually leans a bit and most people would probably wonder if it was in danger of collapsing. The tin-metal roof is rusted and curling at the corners. The wreath above the front door is worn and dull. 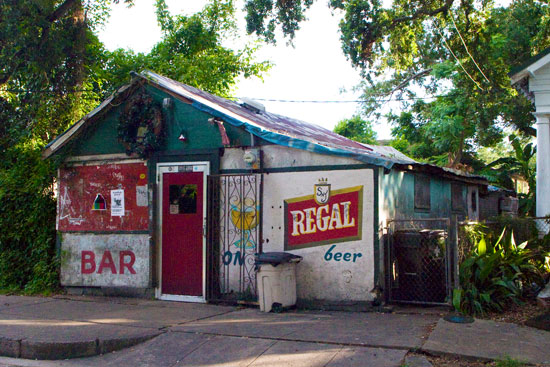 But take a breath, steel your nerves and walk through the door.

Your reward is a small, dark room -- lit by only Christmas-tree lights -- with a few scattered tables and a narrow bar extending into the red and green glowing depths of what you'd swear is little more than an old shack.

This is a dive bar -- the casualness in which it presents it's condition attests to that fact -- but there's something about Snake and Jake's Christmas Club Lounge that elevates it above other, grungier joints in the city. It's the reason Bourdain drank here. It's the reason Clooney drank here too.

It's history is a bit vague. We were told it might have been founded in the '50s: Dave, the current owner, grew up in the area remembers it from his childhood in the '50s, so we at least have a general time-frame. He also thinks it was an auto shop of some kind before it became a bar -- the general shape of the place -- long and narrow as if a garage -- gives him this idea.

When we visited there were regulars of all kinds strewn about the bar: students from nearby Tulane, city officials, business-people and blue collar workers. They talked in hushed tones with the occasional loud guffaws that follow an indecent joke or shared narrative of someone's day.

In the dark the bartender asked us what we wanted to drink. They have signature drinks (which we'll cover in a bit) but Schlitz is the beer of choice here, so we ordered them and melted into the darkness.

In the corner above the front entrance the old TV dangling precariously from the ceiling glowed as we talked to Dave about his little bar in Uptown New Orleans. A random reality show was on but nobody really paid attention, they seemed too immersed in their friends, stories or drinks to notice little else.

It's easy to think nobody really notices anything else in here, except whatever is right in front of them.

And this is probably what makes Snake and Jake's Christmas Club Lounge one of the best dives we've ever been to: its ability to stave off the world outside and provide a timeless, windowless pocket in which to immerse yourself and be alone.

Not totally alone, of course you could be that too, but alone in the sense that there is a bubble of protection around you and everyone else in the place that is completely shielding you from whatever is going on outside.

None of them matter at Snake and Jake's. The place simply won't let any of that in. It never gets to you, never affects you. The bar won't let it. 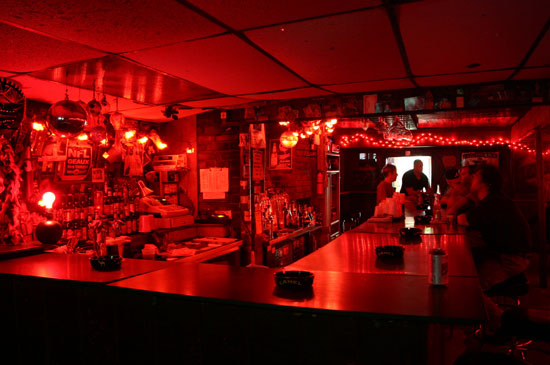 We're drinking a cheap beer with Dave now as he tells us the story of how he came to be the owner of Snake and Jake's in 1994. The dull glow from the string of lights behind him barely exposes his face and he seems instead a shape talking at us from a red-tinted void.

He tells us he'd been a bar musician back then. He grew up in the neighborhood so knew the bar and when the owners decided to sell he thought a local should have it.

"I went to every friend I had to borrow money and nobody would loan me anything," he tells us, "until one said, 'ok, I'll tell you what I can do,' then he said he could give me about 20 percent of what they were asking. I was floored! I told him I couldn't offer that, it'd be an insult, but he said that's all he'd give so I made the offer." He pauses for a bit and smiles.

"Then they took it; the rest is history."

He worked at the place around the clock, usually making little to nothing on his investment. He tells of the first time he actually turned a profit. He remembers calling his friend and business partner and exclaiming, "We made 10 bucks tonight!"

Business has changed dramatically. Dives like this are disappearing every day, and so those who care about them have begun seeking them out.

Anthony Bourdain filmed an episode of the The Layover here. George Clooney and his buddies crashed the place one night (apparently it's so damned dark in the bar nobody noticed who he was until he left).

And so now, Snake and Jake's is an institution. And deservedly so.

Maybe it's because it's so damned dark inside you feel this hushed sense of reverence when you walk in. Maybe it's because deep down, people know places like this are endangered. It could be the friendliness of the owner or bartender, the revelry and near-collegiality between the other drinkers, or it could simply be the "I don't give a f%&$" personality of the place -- whatever it is, it works.

Put simply, people love Snake and Jake's. They love telling you stories about their experiences here. They love telling you the ridiculous things they've seen here -- like the fraternity guys that showed up naked because they heard you could score free drinks in the buff. (The bartender kicked them out but it seems they locked their keys in the car and had to sulk back.)

It might also be the irreverent attitude they have here towards anything "cocktail culture-esque." Their signature drink, after all, is a shot of Jagermeister in a pint of Schlitz (called the Possum Drop, so named because they came up with it the night a possum dropped through the ceiling onto a patron's head). That's about as cocktail as they get here.

All of this combined creates a one-of-a-kind dive that has become one of our favorites.

Yes it's dark, almost too dark. But in a city like New Orleans, a place like Snake and Jake's is needed just to balance out what's going on in the French Quarter. Like the quiet nobility of Atomic Liquors in Las Vegas, it's a place removed from the circus on the other side of town.

Here you drink, you relax, you talk, and you laugh. And you do this with the other shadowy figures around you. And when you're done the world is still there and so are whatever problems are trying to break down the door to get to you.

Snake and Jake's Christmas Club Lounge offers a brief period of relief from all that.

How to Get Here
Snake and Jake's Christmas Club Lounge is located at 7612 Oak Street in New Orleans, LA 70118, in the Uptown neighborhood of the city and a short distance from Tulane University. Their official hours are 7 p.m.-7 a.m. seven days a week, but they told us they pretty much lock up when people are through drinking.

When to go
There's not a bad time to go to Snake and Jake's. It's far enough removed from the craziness of Bourbon Street that you won't have to deal with as much Mardi Gras madness as you might in the French Quarter, but being that this is New Orleans every bar is packed at that time. We went in the middle of July, and though we were melting in the heat and humidity outside, we were cool and comfortable in the bar.

Nearby Distractions
Tulane University is a stone's throw from Snake and Jake's and may be a fun side trip while you're waiting for the bar to open. There's also a worthwhile dive to hit not too far away on Magazine Street called Henry's Uptown Bar (5101 Magazine St) that was opened in either 1900 or 1904 (depending on who you ask).