I was training for a marathon but my left knee wasn't along for the ride. It filed a complaint with the rest of my body. There was a long line at the somatic complaint window that day, so by mile 11 nobody in authority was listening to the knee.

KNEE: Hey, brain! Can't you stop this jerk from running?

BRAIN: Relax, babe. Who's that, the left knee?

KNEE: Paying attention is supposed to be your job.

BRAIN: Babe, coupla miles, this thing's over. Focus on that.

KNEE: Hey, you focus on me, babe, because when I quit, you are just a piece of meat. You are a piece of meat on a stick, sitting in a chair, watching TiVO.

BRAIN: You're being rude. I will now ignore you.

Actually, the knee didn't say that. It said something unprintable here. (Sometimes children read this blog.) But it made its move -- it decided to stop working. Suddenly, I was limping. The training run was over and I limped right into three months of physical therapy. I got the ice packs, the weight training, the electrical stimulation, the whole deal. 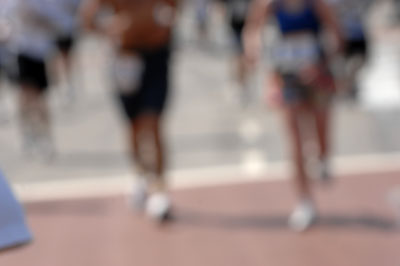 I didn't like feeling sick and weak, so I turned to acupuncture. Having somebody stick needles in you -- and paying them for it -- can sound nuts. I felt at home, however, with the idea of moving qi around and showing my knee how it might heal. It worked. I'm running well again.

There are lots of respectable doctors lining up to say that acupuncture is a sham.

One doc, writing in his Respectful Insolence blog, cites a research study demonstrating that when practitioners faked doing acupuncture it "worked" just as well as the real thing. Doing fake acupuncture meant using specially designed needles that retracted into the needle hub before hitting the skin.

Could acupuncture be nothing more, than "an elaborate and fancy placebo"?

"It doesn't matter what you do to the patient; all that matters is what the patient believes you did."
- Harriet Hall

There's even a book called Snake Oil Science, written by a biostatistician and senior Research Methodologist at the University of Maryland, that tells us why alternative and complementary medicine lies somewhere between bunko and hokum.

I get the sense that some of these docs are sorta pissed off. R.W. Donnell, writing in his blog Notes from Dr. RW, refers to researchers' efforts to understand alternative and integrative medicine as "academic medical woo" and "quackademic medicine." His terms are catchy, but he references Wikipedia as a source and also quotes a report originally published in 1910. Wikipedia is often wrong; things have changed a tad since 1910.

Nevertheless, all these folks are right to get tough. Why? Anything labeled "therapeutic" had better work and better not harm anybody.

Merck had to withdraw the "therapeutic" painkiller Vioxx following reports that it increased rates of strokes and heart attacks. We want people looking at treatments closely. This benefits everyone.

Acupuncture doesn't hurt anybody. Many believe that it works. While "believe" might be the operative word there, the evidence to satisfy the skeptics isn't here yet. Still, their criticism makes the research better.

Have you tried any "alternative" medicine? How'd it work for you?