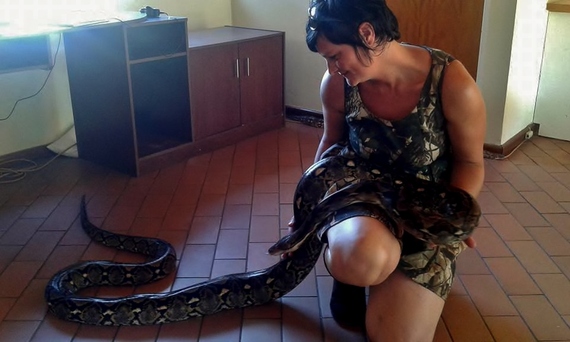 What would it take to get you to spend two weeks in a room full of snakes?

Jeru Greenfingers is the Managing Director of Animals in Wonderland, an educational wildlife sanctuary near Nelson Mandela Bay in South Africa. The group cares for wild animals which were raised in captivity, many of which were rescued, and their goal is to teach children to better understand and appreciate creatures of the wild. Kids get to visit meerkats, geckos, jackal buzzards, monitor lizards, monkeys, and of course, snakes.

Click here for a video of Jeru and some of the animals.

I met Jeru through a Wire Fox Terrier group on Facebook because in addition to caring for wild animals, she is also mom to a WFT. Here she is reading my book about our terrier Rumplepimple to Tobi the dog, Wallace the warthog, and Mia the spotted eagle owl. 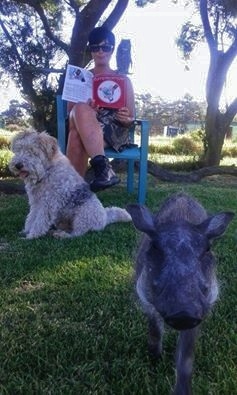 But back to the snakes.

Animals in Wonderland is at risk. The owner of the land on which it is housed needs to sell, and if Jeru can't purchase it, all of the animals will have to be re-homed. This would be a heartbreaking outcome, not only because of the loss of the facility and its programs, but also because of the impact on the animals.

So what is she doing about it? Spending two weeks sequestered with three Dumeril's boa constrictors, a ball python, a Burmese python, and a large, ornery reticulated python named Juliette. 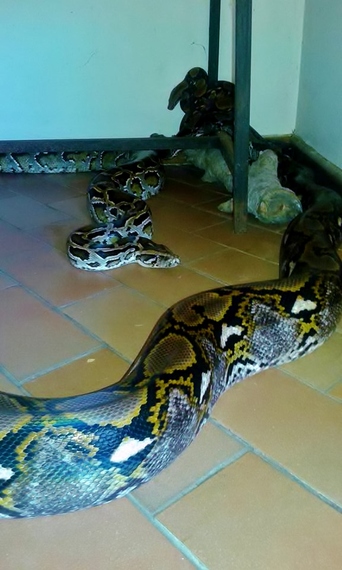 She hopes that by doing this she can raise enough money to buy the land and keep the operation going.

Jeru says that she isn't afraid of snakes generally. But Juliette likes to bite.

Have you ever hung out with a reticulated python? I have. I was about 19 and my boyfriend came home from class one day carrying a large, wriggling denim bag. Apparently someone at school was taking a leave for a semester and needed a snake sitter. Turns out the kid never came back, and we became the proud parents of a 10 foot long tube of muscle and mean. We were told that it was used to handling, and so we brought it out of its cage and let our friends check it out and feel its power as it wrapped around their waist or cut off the blood supply to their forearm.

All was well until it got fed up with us. And then it began to punch.

Imagine a snake as long as a room and as big around as a cereal bowl, winding it's head back and putting all the force of it's pent up coil into a strike straight at your face. It gave my boyfriend a black eye, and scared the crud out of us.

Big snakes are no joke. They are amazing, gorgeous creatures deserving of respect, which is what Animals in Wonderland tries to teach.

Apparently Juliette doesn't punch, she merely bites. For me, that wouldn't be much comfort.

Jeru says she isn't sleeping well. The snakes appreciate her warmth at night and nestle in close. She's on social media at all hours, and is journaling the experience for incorporation into a book about the spiritual journey which led her to start the sanctuary and ultimately to this call for financial assistance. So far she hasn't gotten bitten, but she'll be in the snake room for a few more days, until April 25.

If you'd like to help keep Animals in Wonderland open and make sure the animals are not forced out of the territory they've grown to feel safe in, click here.