This sounds more alarming than it ought: Snakes may be falling from trees at a D.C. playground. And the playground is built on top of two old cemeteries.

On Thursday, May 23, 2013 around 11:40am a call came in about a couple of snakes that fell out of the trees. When the snakes fell they scared the children, and everyone fled. This was in the playground area. I responded but found no snakes. I caught one small enough to fit inside an empty water bottle I had. It was probably a black rat snake. They are indigenous to trees and the warm weather is drawing them out.

As the Washington City Paper noted, it was recently reported that the playground -- and adjoining dog park and sports fields -- lie atop thousands of bodies still likely buried in D.C.'s first Quaker cemetery and a 19th-century African American cemetery. Which, admittedly, provides something of a spooky backdrop. 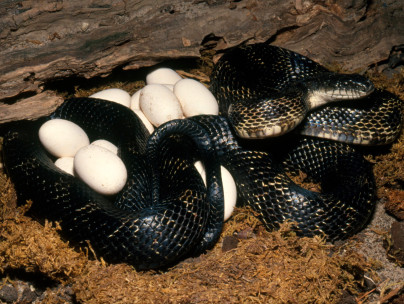 A black rat snake with eggs

Black rat snakes are large snakes that eat rats, as the name implies, killing them "by constriction," not with venom.

Per the National Zoo's website, black rat snakes are "common," "snappy" and "excellent swimmers" who, for the most part, avoid humans. Unavoided humans, the Maryland Zoo says on its website, are often afraid of the snakes because of their size -- and they are indeed long, averaging about 3.5 to 5 feet long. (The listserv report of the snake being small enough to fit into a bottle does raise questions -- we'll update when we have answers.)

Since the snakes that fell in D.C. had to get up into the playground's trees, it won't be a surprise to learn that -- assuming we are indeed dealing with black rat snakes -- these reptiles also climb trees. Here's a video:

While humans aren't always friendly toward black rat snakes, black rat snakes are considered to be great for humans, since they eat the afore-mentioned rats, and would anyone complain about D.C. having fewer rats? (Well, possibly Ken Cuccinelli.)

The snakes' motives for hanging around are understandable to the humans, on top of being beneficial. This time of year, black rat snakes have emerged from hibernation. And, like so many creatures in the neighborhood, they're outdoors enjoying the warmer weather while looking for mates. 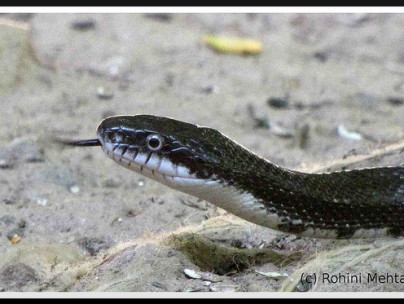 Flickr photo by MRohini, used under a Creative Commons license

Further reading for the snake-curious:

Reptiles Alive's guide to the most common snakes of Washington, D.C.

An explanation from Nature about why snakes sometimes fall from trees.

Is fear of snakes genetic?

That time a copperhead -- which is venomous -- turned up in a Northern Virginia courthouse hallway.

Plus here's more about the historic cemeteries.

And, finally, more about Biblical plagues: we're not sure how you'll feel to learn that some scientists say the ten plagues of Egypt actually happened; we think you'll be happy to note that snakes weren't on that list.