Sexting on Snapchat may be less common than you think, at least according to a new survey of adults who use the app.

A study from the University of Washington that polled 127 Snapchat users ages 18 and over found that 60 percent of respondents used Snapchat primarily to send "funny content," while the second most popular type of "snap" is a selfie. Fourteen percent of those surveyed said they'd previously sent sexts over Snapchat, but just 1.6 percent said they do so regularly.

Snapchat, which allows people to exchange messages that self-destruct seconds after they're viewed, has attracted an estimated 82 million users, most of whom are between ages 13 and 25, according to Business Insider. Despite its limited sample size and focus on adults, the UW study offers a rare glimpse into how the app is used -- along with a chance to correct erroneous Snapchat stereotypes. (The people surveyed also skewed young, with 82 percent of the respondents between 18 and 24 years old.)

Many assume Snapchat's biggest draw is the temporary nature of its messages, which encourages people to share racy images without worrying about the repercussions. But the researchers found the app's key appeal is even simpler: It's fun.

Survey respondents said the app's emphasis on temporary content makes it feel more appropriate to share "silly or mundane" images on Snapchat than, say, over text message, where pictures are saved for posterity. "Snapchat allows for less serious communication," said one person. Another said Snapchat "lets me have more cats in my life because my friends who don't normally post pictures of their cats on other social media will Snapchat their cats to me." 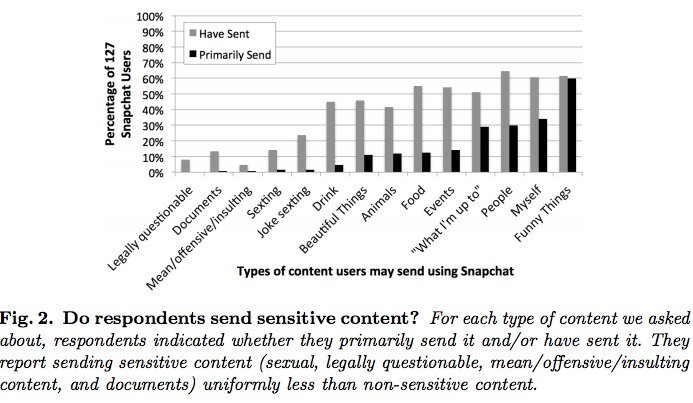 Image via Sex, Lies, or Kittens? Investigating the Use of Snapchat's Self-Destructing Messages.

The majority of people surveyed said they didn't share sensitive images -- like sexts, photos of illegal activities or images of documents -- over Snapchat, even though the ephemerality of the content might make it less risky to do so. Based on this, the study's authors wrote that for many people, secure messaging isn't the app's draw, although the "mere disappearance of messages from the user interface seems to appeal to some."

Though Snapchat is best known for its self-deleting images, there appear to be a considerable number of people taking screen shots of the content they receive. Snapchat sends the user a notification if someone takes a screen shot of his or her message, although there are ways around this. A majority of respondents in the UW study (53 percent) had screen shots taken of their messages at some point, and slightly fewer (47 percent) had taken screen shots themselves. Five people admitted to using a separate camera to photograph a message, which prevents the sender from knowing his or her photo was captured.

However, most people didn't seem to mind that their "snaps" were saved. When asked how they reacted to having a screen shot taken of their message, respondents "more commonly chose answer choices indicating neutral ('didn't care') or positive ('thought it was funny') reactions," according to the report.

Image via Sex, Lies, or Kittens? Investigating the Use of Snapchat's Self-Destructing Messages.

Despite the relative infrequency of sexting among the survey's sample of users, the researchers found that Snapchat has a reputation for illicit messages that was discouraging some from downloading the app.

Among the 61 people who started the survey but failed to complete it because they hadn't used Snapchat, several expressed concerns about the "additional connotations" of the app. Snapchat "has a bad reputation (for sexting)," said one. Another said it "seems useful for only inappropriate content."

The authors presented their findings at the Financial Cryptography conference in Barbados this past March. The lead author of the paper, Franziska Roesner, is a professor of computer science and engineering at the University of Washington.