This photo was taken at my brother's wedding, ten years ago this summer. In it, I'm marching away from what turned into a nightmarish wedding photo session with my screaming son Isaac clutched under my arm. 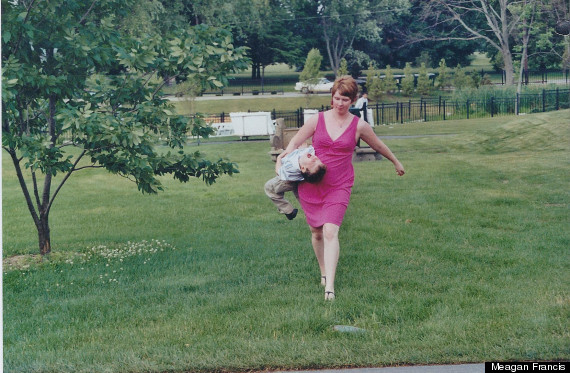 While this picture makes me laugh now, when I first saw it I cringed and packed it away. I felt like it represented everything that was wrong about me as a mother.

I was 25 and pregnant with my third in what has to rank up there as one of the world's most poorly-timed pregnancies. My life was pretty much a mess, and it showed in my mothering.

I was also the mom of Isaac, who was chubby, adorable, intelligent... and hell on wheels. Take him to a store, and Isaac would bolt down the aisle, gone before I could even shout his name. Seat him at a desk, and Isaac would try to climb on top of it. Ask him to do something, and Isaac would do the opposite. Once I spanked him in sheer desperation, and he laughed in my face.

Teachers told me that Isaac was smart, but disruptive. A handful. Couldn't sit still. None of this came as a surprise to me. I spent my days in anxiety over what Isaac would do next. If I took him to a friend's house, would he break something, pull the cat's tail? If I took him to the park, would he bowl over a smaller child or refuse to leave when it was time? If I asked him to clean up his toys, would he throw them instead?

I spent my days carefully navigating the world through his lens, proactively anticipating every tantrum, disappearance or act of rebellion.

And it was exhausting.

But somewhere along the lines, things changed. Isaac slowly learned how to control himself in school and at home. Where I had once dreaded conferences and the teacher's attempts to put a positive spin on the kid who had been solely responsible for raising their blood pressure ten points, I began to look forward to them.

Somewhere along the line my rambunctious, wiggly, often ill-behaved son went from spaz to total sweetheart. It happened so slowly that I barely noticed it until one day, when a teacher shared that Isaac was one of his favorite students and I realized in a moment just how very far we had come.

Today, Isaac is 13-years-old and can only be described as a lovely young man. He's the first to say "I love you, Mom" or offer a hug. He's kind to his younger siblings, gentle with his baby cousin. He's quiet and smart and a little shy, with a wicked sense of humor that does still, occasionally, get him into a bit of hot water at school.

But those sweaty, exhausting days of chasing Isaac through grocery stores and carrying him kicking and screaming on one hip are a thing of the past. A phase that felt like it lasted forever when we were in the thick of it, but in reality lasted barely the space of a blink, the snap of a shutter.

Truthfully, I couldn't tell you why Isaac was so difficult then or why he's so easy now. When he was a young child I got the impression that he was a mass of impulses and sensations he couldn't control. Maybe what he needed most was simply time to grow into himself, and the acceptance of those around him while he was figuring out how to navigate the world.

I do know that I can no more take total credit for the way Isaac is today, than I can take all the blame for the way he was then. I didn't do everything right, nor did I do everything wrong. I wasn't always consistent and I didn't always follow through. I was as firm and loving as I could be while sometimes buckling under the weight of parenting a challenging child.

Looking at this picture now, I'm so glad my stepmother thought to snap it and preserve that moment. Because, let's face it, it's hilarious. And also, because I'm proud of the grit and determination I recognize in my face and gait, during a time when I truly felt the eyes of the world watching and judging me.

But maybe most of all, because it serves as an important reminder that as parents, we never can be sure of how our kids will turn out, nor exactly what our role and influence might be in the outcome. We try our best, we make mistakes, and we hope for the best.

I guess that's what this photo represents most to me. Hope. Hope that my worst days of parenting will be followed by some kind of sweet reward, even if I can't imagine it right now.

And hope that today's most embarrassing, stressful moments will make for a hilarious story in 10 years or so.