I received an exclusive tour of Graceland last week. No, not Elvis' infamous mansion in Memphis, Tenn., but a set visit of USA Network's hit hour-long original drama series Graceland. 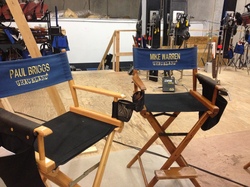 Although the series is set in Southern California, the Graceland cast films scenes on a soundstage in Ft. Lauderdale and throughout the Southern Florida area. Apparently, the film industry in Florida is one of the largest in the United States. Who knew?

The highly addictive law enforcement TV drama is already half-way through filming its second season, which airs this summer. Until then, I have the following scoops for fans eager to hear what's next after where things left off last Fall (
light spoilers ahead
):

The series, which was wrought with twists and turns last year, will continue keeping one-step ahead of viewers. Although there will be some smaller side cases, there will be a larger overarching case and evil guys that will weave itself throughout the storylines this coming season.

During interviews, all of the six main cast members echoed the fact that Season 2 will be darker than last year's, which was already riddled with heroin, severed limbs and secrets.

"Last season was an introduction to bring the USA viewers in and now it's going to get dark," said Graceland actress Serinda Swan who plays DEA Agent Paige Arkin. "But we figure we have a solid group now that understands what our show is about and how dark we get, so they really gave us the liberties to have some fun, it's great." 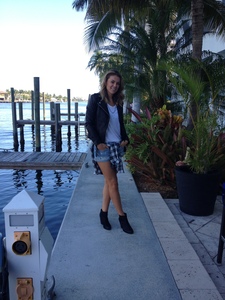 Providing additional insight in to what some of those darker elements would be, Swan revealed that one of the cases will include human trafficking, combining her real-life philanthropic passion with her on-screen work. In 2011, Swan founded "Friends to Mankind" (F2M), an organization that partners with non-profits to raise awareness and funds through educational campaigns and high-profile -- and sometimes dangerous fundraisers. F2M's first collaboration was with the Somaly Mam Foundation benefiting victims of sex-trafficking.

"It's so nice when the two worlds come together and we can actually use the spotlight as an actor to illuminate something else in the world that's happening. I'm fulfilled!" said Swan.

"Where we find Briggs in the beginning of season 2 is in a place where he is kind of looking for some redemption. He's did some bad things for maybe justifiable reasons, understandable reasons, and he's trying to not continue living in such a dark place, a morally ambiguous place," said Sunjata "Although the job does have certain demands, so of course the curve ball in season two is that every time Briggs tries to get out, they pull him back in. Somebody in the house needs a piece of the old Briggs, or needs something done that only the old Briggs would do or know how to do, so there is that tension for him." 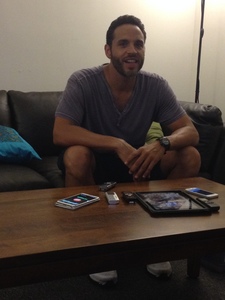 And unfortunately, for fans of actor Aaron Tveit's singing (Les Misérables (2012), Broadway's "Catch Me If You Can" and "Next to Normal"), you will be disappointed to learn that he has no plans of singing on Graceland, not even under an alias or during drunken karaoke (boo!). 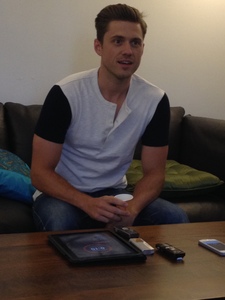 However, he often sings on the set to release tension when preparing for an emotionally powerful scene. "Half the time I don't even know I'm doing it, that's the thing," says Tveit with a laugh. According to the crew on set, the other day he was caught singing "Climb Every Mountain" while filming.

Is it June yet?

For more photos from the Graceland set and its stars please visit my personal blog post.