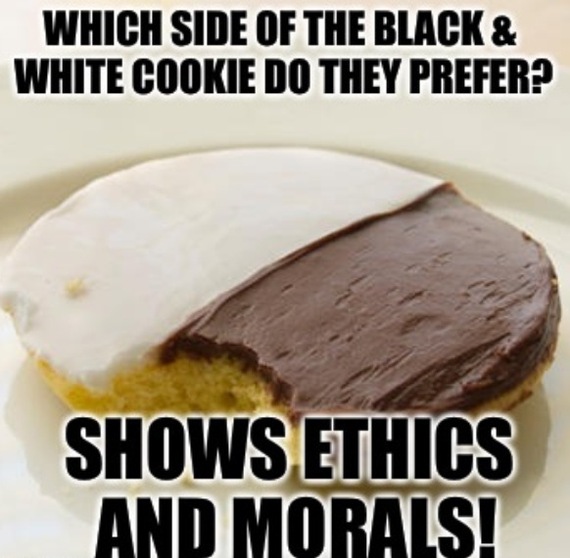 Sure, the Internet is filled with lists of topics that you should discuss together prior to getting serious with someone. We all know you should talk about how you both feel regarding: a) Children b) Pets c) Finances d) Household Chores e) Frequency of Sex f) Location of residence g) Dark chocolate and so many other subjects, but still. Really? Is that supposed to give you an accurate and true litmus test of whether this person is right for you?

Aren't we all still in the "Put my best foot forward" mode until the minute we walk down that aisle? And what woman is going to admit that putting her best feet forward entails having a new $1,500 pair of Louboutin shoes on them every month? And would you confess to someone that the only reason you donate to a charity is to get those cute little personalized return address labels?

Every time I hear a couple's relationship has fallen apart because "she isn't the same person she was when we dated," I nod my head knowingly. She (or he) did NOT change. They simply couldn't keep the lovely sales presentation going forever. It's exhausting. There must be a way to cut through the facade earlier!

When I date, I use my own unique version of a "Sincerity Test." It involves making up a joke that doesn't have a real punchline. When I tell it, I pause strategically to see if they will do the polite, fake laugh thing.

Here's the most recent joke:

"What do you call a woman who won't do windows? An Adult Film star on ice-skates!"

Get it??! Of course you don't. But some men will laugh uproariously. A few will look quizzically and ask me to either tell the joke again or explain the bizarre ending. Those are the ones I date. And then tell another joke...

So without any further ado, may I present....

SNEAKY WAYS TO FIND OUT ABOUT THE PERSON YOU'RE WITH!

1. Forget Monopoly (and whether or not they cheat by stealing money from the bank.) Play Scrabble with them instead. Form a seven letter nonsense word. Do they insist on the Dictionary Challenge? (Shows Trust Issues.)

2. Text them from a cell number they don't recognize and flirt with them anonymously. Do they flirt back? (Tests boredom level) While flirting, text them a joke WITHOUT a real punchline that you've already told them before. (Tests their memory.)

3. Go to a Chinese restaurant together. But forget how your partner treats the hired help. Everybody knows that you'll be watching how nice they are to the waitress. Instead notice if they miss a tiny piece when picking the mushrooms out of the Shrimp Szechuan? (Tests for Attention to Detail. Also shows if they can tolerate a rubbery textured gross fungus. Eww!) Do they hand you your own particular fortune cookie or let you choose it for yourself from the plate? (Control Issues!) Do they add on, "In bed" after reading their fortune aloud? (Shows a propensity toward major Kink!)

4. Knock on their front door. Immediately throw dirt on their carpet. View reaction. Anything less than a chuckle is bad news. (No sense of humor.) Everyone knows this is a hilarious bit from one of the greatest I Love Lucy episodes ever.

5. Ask them if they prefer Mary Ann or Ginger? Mrs. Brady or Mrs. Partridge? Kramer or Newman? Starsky or Hutch? Wilma or Betty? Scarlett or Melanie? (Tests gullibility and logic factors... do they really believe Mary Ann can bake coconut pies without any flour on the island? The rest of the choices just test for television addiction. Except the last one. It's a four hour feature length movie with the most handsome guy ever. Tests their "Clark Gable Tolerance" level.)

6. Snickerdoodle or Oatmeal? Fudge or Peanut Brittle? The black or white side of a Black and White Cookie? This doesn't tell you anything about their character whatsoever, but you will have clarity on whether you should walk into a bakery with them.

7. Ditch them in a large department store, then page them over the loudspeaker by a pet name, "Will Pookie, Snookie Cookie please come to cashier number 8 please? Your Doodle, Noodle, Kitten Caboodle is waiting for you." (Shows tolerance for PDA.)

8. Hold a garage sale with them. Will they part with their kid's old shoes? (Sentimentality test) Will they mark down those same junky shoes to a reasonable price? (Shows realistic expectations.)

9. Do they say "Bless You" when a stranger sneezes? (No? Shows lack of goodwill toward mankind. Yes? A religious zealot.)

10. Tell them there is a big surprise waiting for them in your bedroom. But you've hidden your front door key inside one of those pretend, "Hide-a-key" stones in your rock garden around the side of the house. (Tests perseverance) Text them back and tell them you meant to say "under the door mat." Remove the mat. (tests Patience) Call their cellphone and tell them to look in the mail. Remember to place your doormat inside the mailbox with a note attached that says, "Door has mysteriously opened by itself." (Tests whether they'd be a good audience at a magic show.)

The following items in the next section must be tested when you are not around. You need to find out how they behave when they think they are alone. You've heard it said to "Dance like nobody is watching!" Right? Well, I will soon be marketing a motorized "Fly on the Wall" with a camera and mic hidden discreetly inside, so YOU CAN be watching.

11. Do they wash their hands in a public bathroom when nobody else is there?

12. Do they keep their underwear on when trying on bathing suits in a private dressing room inside Target?

13. Do they still clean up after their dog when they walk them on a dark street at night?

14. Do they tailgate people who drive super slowly in the fast lane on the freeway? What happens when they realize they just gave a cute little grandmother type the finger?

15. Will they stop at a lemonade stand run by little kids? Will they overpay and lick their lips at the sugar water? Or do they demand their change, telling the child there should really be a cookie to go with the lemonade at those prices.

16. When watching Old Yeller, do they cry at the ending? Or just say, "That's life."

17. Do they drink from the family milk carton in their refrigerator when they just want a fast, little sip?

Results: You should drop them if they fail more than two from each section. And remember # 4 is a major deal-breaker. EVERYBODY loves Lucy.

Originally Posted on Author's Humor Site "Once Upon Your Prime!"