The realm of living things known to science gained some fascinating new members in the past year. These include a monkey that sneezes when it rains; a tiny worm discovered nearly a mile below ground; a mushroom that looks more like a sponge and the first night-blooming orchid ever recorded.

These strange organisms and others made the top 10 list of species described in 2011.

The International Institute for Species Exploration at Arizona State University and an international committee of scientists issued this list for the fifth year today(May 23), a date coinciding with the birthday of Carolus Linnaeus, the Swedish botanist who created the modern system for naming and classifying living things.

The list is intended to honor the work of explorers and museum scientists who continue to discover new plants, animals, fungi and microbes. [Photos of the Top 10 New Species]

Its other purpose is not a celebratory one. The list is also intended to highlight the diversity of life on the planet, which is declining due to extinctions. In fact, scientists have said we are in the midst of the sixth mass extinction event triggered by human activities.

More than 200 species were nominated, and committee members selected those that could best capture attention.

"Some of the new species have interesting names; some highlight what little we really know about our planet," Mary Liz Jameson, an associate professor at Wichita State University who chaired the international selection committee, said in a statement.

Since 2000, an average of 36 new mammals have been discovered each year. This year's mammal tally includes top-10 awardee Rhinopithecusstrykeri, a snub-nosed monkey with mostly black fur, a white beard and a penchant for sneezing in the rain. 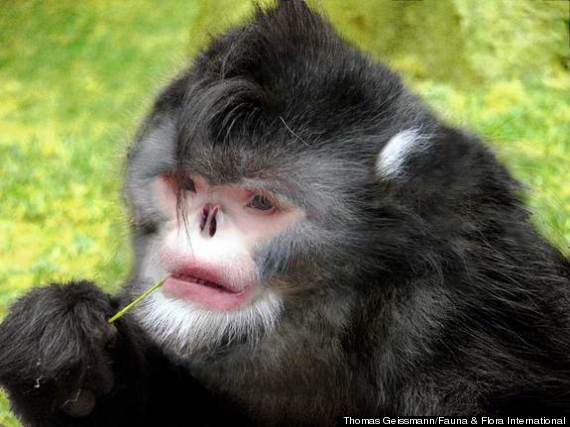 A previously unknown type of snub-nosed monkey, discovered in northern Myanmar and dubbed Rhinopithecus strykeri, has a nose so upturned that the animals sneeze audibly when it rains. To avoid inhaling water, the monkeys supposedly sit with their heads tucked between their knees on drizzly days, according to local hunters. The species, shown here in a Photoshop reconstruction based on a Yunnan snub-nosed monkey and a carcass of the newly discovered species. [Read more about this sneezing monkey]

The committee also named tiny worms discovered 0.8 miles (1.3 kilometers) underground in a South African gold mine to the list. It became the deepest-living terrestrial multicellular organism known. The species was named Halicephalobus mephisto in reference to the Faust legend of the devil. A giant millipede about the size of a sausage takes the title of largest millipede found in one of the world's biodiversity hotspots, Tanzania's Eastern Arc Mountains. 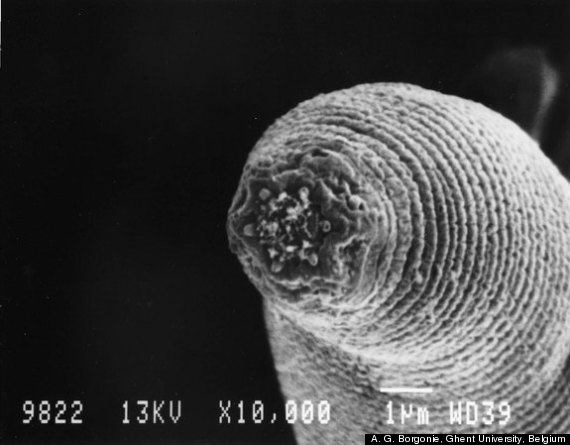 With a length of just 0.02 inches (0.5 millimeters), these tiny nematodes called Devil's worm are the deepest terrestrial multicellular organisms on Earth. The worms were discovered at a depth of nearly a mile (1.3 kilometers) in a South African gold mine; the species was named Halicephalobus mephisto for the Faust legend of the devil, as the new species must survive immense underground pressure and devilish-hot temperatures. (Worm is shown here in a scanning electron microscope image.)

The only night-blooming orchid ever described, which opens its flowers around 10 p.m., also made the list, as did a species of fungus that produces a mushroom that smells fruity and resembles a sponge. It was named Spongiforma squarepantsii for the cartoon character SpongeBob SquarePants. 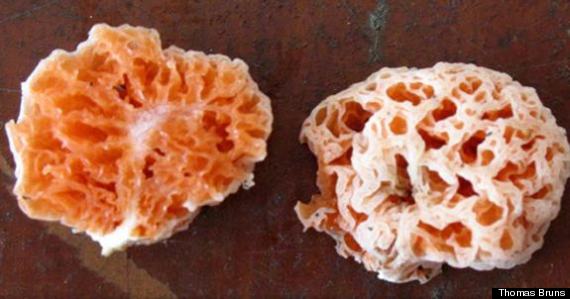 A funky new mushroom species "lives in the rain forest, under a tree," and researchers say it's nearly as strange as its SpongeBob SquarePants namesake. Shaped like a sea sponge, the bright orange (and sometimes purple) mushroom, Spongiforma squarepantsii, was discovered in the forests of Sarawak, Malaysia, on the island of Borneo.

Not all members of the list are currently alive. The "walking cactus" is a 520-million-year-old animal dubbed Dianiacactiformis that appears to link an extinct group of wormlike creatures called lobopodians to modern arthropods, including insects, crustaceans and spiders.

"The more species we discover, the more amazing the biosphere proves to be, and the better prepared we are to face whatever environmental challenges lie ahead," Quentin Wheeler, an entomologist who directs the International Institute for Species Exploration at ASU, said in a release.