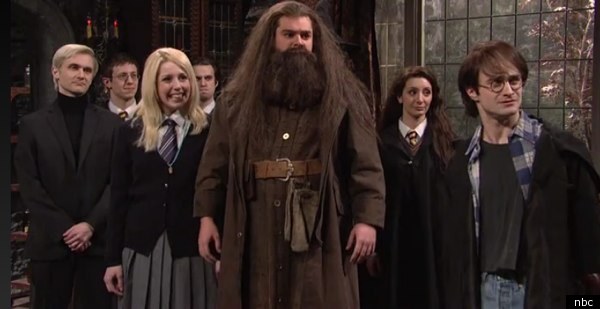 Well, that was disappointing. I learned long ago never to get too caught up with prognosticating the quality of a show based on its host. But, yeah, this time I felt pretty sure about things. "Oh, Daniel Radcliffe has so much stage experience, plus he's just so charming -- this week will be great!" It was not meant to be. I mean, there were a lot of "OK" sketches last night, but not a lot of moments that stand out. Which is a shame.

Also, quick question: where was Andy Samberg? He had a small role in one pre-taped segment, but I honestly don't think he was there last night. I even looked for him during the "good nights" -- nope. Alas, on to a disheartened scorecard...

"2112" (Radcliffe, Wiig, Brittain, Pedrad, Hader): Oh, how stupid we all are, here in 2012, with our cars and our not-yet-assassin Taylor Swift! What's great about this is that, somewhere, right now, there is a similar production about 1912 that relies just as much on heavy exposition and mockery. "Hey, look at me, I'm writing a letter." "Hey, I need to go to the printing press and make copies of this week's vaudeville scorecard." Also, I kind of do want to live in a world in which wolverines have been domesticated.

"Ricky Gervais Promos" (Sudeikis): I am so sick and tired of hearing just how crazy Ricky Gervais is going to be at tonight's Golden Globes. "We can't control him! He could say anything! Last year, we pretty much fired him, but he's back anyway! How did that happen? See, we just can't stop him! Watch out, Hollyweird!" Anyway, Sudeikis does a nice job of capturing this frustration. Also, I still laugh every single time at Brendan Fraser's weird laugh.

"Harry Potter Epilogue" (Radcliffe, Wiig, Pedrad, Killam, Elliot, Brittain, Moynihan, Hader): First, Paul Brittain plays an excellent Draco Malfoy. Second, this was fun, but... missing something. Harry Potter is now the loser who is still hanging around his school 10 years after graduating. The premise is pretty great, the execution isn't quite as funny as it should have been. It almost feels like a PG version of what was originally an R idea.

"The Jay Pharoah Show" (Pharoah, Radcliffe): This one's almost there. And I hope that Pharoah gets another shot at this because there's a lot to mine here. It's almost the opposite of "The Chris Farley Show." Instead of an overexcited Farley -- who just wants to talk about all of the wonderful and awkward things that his guest has done -- Pharoah, on the other hand, has absolutely no clue who this Daniel Radcliffe is supposed to be. And Pharoah just uses the show as an excuse to do his Denzel Washington and Will Smith impressions. Again, almost.

"Daniel Radcliffe Monologue" (Radcliffe, Killam, Hader, Moynihan): Radcliffe sells his monologue on charm alone. Also, it was kind of weird because I can't remember the last time a host gave a preview for the show, as in, "We will have a Harry Potter sketch." I kind of liked that, actually. But I do wish that Radcliffe would have just moved on after the, "these books were for children," line instead of backtracking. I would think the guy has earned enough good will from the Potter community by this point for them to know that he was kidding, right? (OK, maybe not.)

"You Can Do Anything" (Bayer, Hader, Killam, Sudeikis, Radcliffe): This one should have been better, too. I almost placed it in this week's "Bad" because, other than Radcliffe's quite impressive jig-drawing, I didn't laugh. But, the concept is just so good. It's just that it felt like there were three or four moments that almost led to something great -- it just never happened.

"Delaware Fellas" (Radcliffe, Wiig, Thompson, Killam, Moynihan, Sudeikis): Not nearly as good as Fred Armisen's Danish production of The Story of Frank Sinatra, but, what's lacking is made up for by the cast looking like they're having a good time. Also, I had no idea that Delaware doesn't have a national park. (The clip isn't on Hulu, so a very bad YouTube clip is below.)

"Headz up App": Hey, Andy Samberg, everybody. Maybe this was tacked on at the very end just to remind us that he is part of the show this week? I think the only reason that I liked this commercial parody is because if this app existed, I would actually buy it. (Also, I was not expecting to see Vanessa Bayer run over by a taxi.)

"Spin the Bottle" (Radcliffe, Moynihan, Ensemble): OK, so, this one felt like an Andy Samberg Digital Short, but Samberg wasn't in the sketch (or even at the show, it appears) and it didn't start with the "Digital Short" tag. Bobby Moynihan almost single-handedly pushed "Spin the Bottle" up to the "Good" category. Almost.

"Weekend Update" (Meyers, Armisen, Bayer, Radcliffe): Radcliffe's dog costume was amusing (and we received our second Sarah McLachlan reference of the evening, for whatever reason). And in the past I've enjoyed Armisen and Bayer as the best friends of a world dictator, but "Update" just seemed off last night. Meyers appeared to be rushing though, for whatever reason, and the only time that I laughed was during Meyers' last joke about Miller Light being meant for dogs. (Which, I'm sure will make oft-sponsor Bud Light quite tickled.)

"Cold Open: Mitt Romney" (Sudeikis, Elliott): Good lord, what a boring political season this has turned out to be. I don't even want to really blame SNL for another boring political sketch because, really, what are they supposed to do? Mitt Romney wants you to think he's normal and folksy, but, alas, he's privileged. SNL is working with nothing here and it's probably not getting better anytime soon. (Also, I am convinced that Abby Elliott has a fascination with being a brunette.)

"Mayor" (Wiig): This was presented in three different segments. Mayoral candidate Glenda Okones decided to create an attack ad against herself. The only thing I enjoyed was the way Kristen Wiig would say, "Vote Okones."

"Target Lady" (Wiig, Radcliffe, Bayer, Hader, Thompson, Killam): "Target Lady" was the first live sketch after the monologue. This was also the moment that I realized, "Uh oh, tonight might not be as good as I had hoped." These "Target Lady" sketches aren't even remotely funny any longer. What started as a somewhat amusing sketch about a Target employee who really likes the products sold at the store in which she works, is now a drama that involves shirtless co-workers and a boss (Hader) who directs sexual innuendos at his male employees. When Kristen Wiig retired Gilly and Penelope, I wish she would have included Target Lady, too. (Though, chances are good that this is the last time that we will ever see Target Lady. Hopefully.)