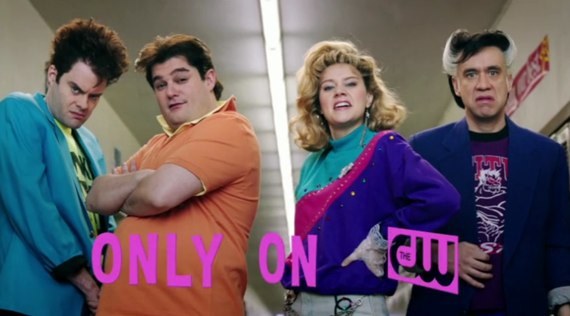 So, here's what we learned last night: Adam Levine is not a particularly good "SNL" host. Now, Levine certainly didn't phone it in -- like we've seen other hosts do this season -- but, like many a musical guest-turned-host before him, this just really didn't work out. At least he gave a nice effort though.

Reading the cue cards is a huge part of "SNL" and it always has been. The hosts and cast are told to read the cue cards because of the constant changes to the script, even right before the show goes on live. Adam Levine's performance as host marks the first time that the cue card reading actually bothered me. And I can't put my finger on it, but the show has really lost something since the election ended. Sure, the holiday fueled Martin Short show was good, but there's just an edge that's been missing for a few weeks and it certainly didn't return last night. Though, this wasn't by any means a bad show -- like last week's mess -- it just wasn't a particularly great one either. Here is your "SNL" Scorecard ...

"Sopranos High" (Bobby Moynihan, Fred Armisen, Bill Hader, Tim Robinson, Cecily Strong, Adam Levine, Aidy Bryant, Kate McKinnon) First, this sketch included a nice use of Yello's "Oh Yeah." Second, I never before knew that I wanted to watch the cast of "The Sopranos" discuss "Return of the Jedi" (and the "bear people"), but it turns out that I did. Anyway, this was just about perfect: a simple idea that mocks a silly premise ("The Carrie Diaries") and executed well with great impressions.

"Rosetta Stone" (Vanessa Bayer, Kate McKinnon, Kenan Thompson, Bill Hader, Bobby Moynihan, Taran Killam) What started out as a way for adults to learn a second language turns into a way for men to learn Thai in order to speak with online prostitutes. I do like it when when a sketch or parody starts out benign and, halfway through, falls down a deep, deep, dark hole.

"Cold Open: Obama and MLK" (Jay Pharoah, Taran Killam, Kenan Thompson) Here's the thing: I could give a shit that Beyoncé lip-synched during the inauguration ceremony. And it appears that the ghost of Martin Luther King Jr. doesn't care either. (Seriously, I can't believe that was a huge story. Didn't we all get over that after the late Whitney Houston lip-synched "The Star Spangled Banner" at the Super Bowl?) Anyway, this sketch was nice. And it felt like it meant something special to both Pharoah and Thompson, which came through with their energy.

"Firehouse Incident" (Bill Hader, Taran Killam, Nasim Pedrad, Kenan Thompson, Adam Levine, Bobby Moynihan, Cecily Strong) There was a lot of screaming in this sketch. But -- yes, yes, yes, yes -- after many screams, I started to laugh. Then I started to laugh more and more and more. I am actually embarrassed by just how much I laughed at Bill Hader screaming his lines. I think I'm going to just go ahead and move on because I am too embarrassed to write anymore about this sketch.

"Weekend Update" (Seth Meyers, Nasim Pedrad, Kenan Thompson) I wish Nasim Pedrad would come to my office and meet with Arianna Huffington (who happens to be my boss's boss) and we could all discuss how I'm supposed to cover this impression without me losing my job. Anyway (!) Kenan Thompson does a really nice Ray Lewis dance. Can we talk about that? And Meyers was affable enough this week, but nothing really stood out. Honestly, it was nice to see Nasim Pedrad have quite a bit to do in the show last night ... which hasn't been the case in some time.

"Maroon 5 and Train" (Adam Levine, Taran Killam, Vanessa Bayer, Jay Pharoah, Aidy Bryant, Jason Sudeikis, Bill Hader, Kenan Thompson) This was fine, but it just had "this should be much better" written all over it. Sure, Levine is a good sport to mock his own musical stylings. But, in the end, nothing really happened. I don't know exactly what I was expecting, but this never had the payoff that I thought we'd get -- you know, like all Train songs are actually, in real life, banished for eternity. (OK, I'll admit, at times "Cab" is listenable.) Though, it's always nice to see Bill Hader's Dave Matthews John Mayer.

(This sketch isn't online due to song rights issues)

"Digital Short: YOLO" (Andy Samberg, Adam Levine, Jorma Taccone, Akiva Schaffer, Danny McBride, Kendrick Lamar) OK, so, when the Lonely Island needs to promote a new song, we now know that it will still appear on "SNL." Noted. Seriously, Samberg made such a big deal about his two last Digital Shorts at the end of last season and ... here we are again. I mean, I thought "Lazy Sunday 2" was how he was going to "finish it"? To tell you the truth, I just don't know why this bothers me as much as it does. Former cast members come back all of the time, but this just seems so soon. If it had been just a cameo (like Kristen Wiig had during Martin Short's show, who certainly didn't bring back Gilly), that's one thing, but to present a new Digital Short -- and a mediocre one at that, compared to their past work -- just seems like we went through the whole "Goodbye Andy" routine for no reason. I suppose at this point I'd rather watch a sketch featuring Tim Robinson or Aidy Bryant to see more of what they can do than I would of a cast member who left the show last season. I digress.

"Catfish" (Adam Levine, Taran Killam, Aidy Bryant, Jay Pharoah) What a missed opportunity. First, let me say, I think "Catfish" the movie is fake. Not that I don't think that there was a person pretending to be other people on the Internet, but I don't for one second believe that Nev Schulman and his friends are so naïve that they didn't realize what was going on from the beginning. Sure, the sketch makes everyone involved with the new "Catfish" look smug, but it didn't go far enough at the end. There was a better ending here begging to be had. Also, yes, unfortunately, this sketch was the epitome of cue card reading -- to the point we could see the cue cards in a reflection.

"Advice Show" (Adam Levine, Kenan Thompson, Nasim Pedrad, Vanessa Bayer, Jason Sudeikis) I'm going to be honest: I'm not exactly sure what this was. I mean, I get it that the two hosts think that everyone is gay, but it just seemed like an excuse for "funny accents." My point: What is this sketch trying to say? Is it trying to say that the hosts of gay orientated shows think that everyone is gay?

"Adam & Janet" (Adam Levine, Bobby Moynihan) First, I don't understand at all why this sketch started off with a dated "Law and Order" reference, only then to abandon it completely. And I'm not sure I understand Moynihan's Janet or how it's that different from Horatio Sanz' Carol. After a Maroon 5 concert, Janet wants to sleep with Adam Levine -- and that's pretty much it.

"Biden Bash" (Jason Sudeikis, Adam Levine) Joe Biden does a nice Macho Man Randy Savage impression. OK? This felt like a "Jason Sudeikis as Joe Biden Greatest Hits Sizzle Reel." The problem is, when you put all of the "wackiness" all together as one sketch, boy, does it come off as silly. (Though, I did actually enjoy Levine as a Neil Diamond impersonator.)

"Adam Levine Monologue" (Adam Levine, Andy Samberg, Cameron Diaz, Jerry Seinfeld) I realize monologues are a tough thing to make original -- but this wasn't funny. This was "cavalcade of people you might recognize." Yeah, yeah, it was a play on "The Voice." Oh, I mean, fellow NBC show "The Voice." Anyway, what a great commercial for "The Voice"!