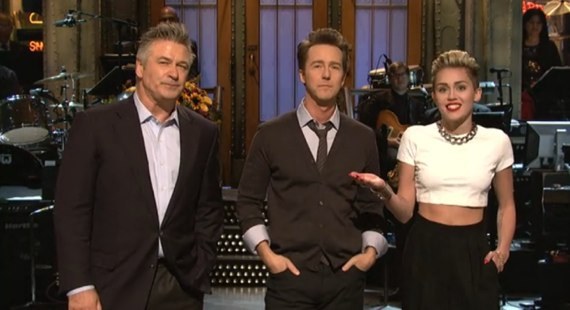 Edward Norton becomes the second "Moonrise Kingdom" cast member in a row who is not actively promoting anything to host "Saturday Night Live." (Which, yes, was not lost on "SNL," considering their brilliant Wes Anderson short.) And, hey, look at Norton up there: Charming his way through "SNL." Norton, infamously, has a reputation of being, let's say, intense. Certainly a perfectionist, but last night, he went with the flow and the cast responded.

Norton hosted what is, at this stage in the game, the best "SNL" of the season. Of course, we're only four shows into what has been a bit of a rocky start, but this new cast does show improvement every week (yes, even with Miley Cyrus showing up for absolutely no reason whatsoever). Join me, if you will, as we venture into a mildly optimistic Scorecard...

"New Horror Trailer" (Edward Norton, Noel Wells, Jay Pharoah, Nasim Pedrad, Kate McKinnon, John Milhiser, Ensemble) I don't know what to add to this other than, as a Wes Anderson send up, this was darn near perfect. Also, Edward Norton must be feeling pretty sure of his relationship with Anderson even though he's only appeared in two of his movies. (The second coming next March with "The Grand Budapest Hotel.")

"Halloween Candy" (Edward Norton, Bobby Moynihan) What a delight. You know, I have to admit, Edward Norton looked like he was having the time of his life during this show (which is nice for Norton, who isn't really known as a "fun guy"), but no more than right here -- he even thought the Bazooka Joe comic was "funny as all hell." (And I wish people would hand out razorblades at Halloween that are still in the package -- I would consider trick or treating again because razorblade cartridges are very expensive.)

"Weekend Update" (Seth Meyers, Cecily Strong, Bobbby Moynihan) Now that Bill Hader has left the show, Bobby Moynihan has quietly made "Weekend Update" his own personal stomping ground. And with Anthony Crispino, we get our first mention of Seth Meyers' new talk show coming next year. Which also reminds us that this current Seth Meyers-Cecily Strong "Update" team only has two more months together.

Good grief, this was weird. (I mean that as a compliment.) And I'm glad to see Brooks Wheelan playing anything other than the smarmy bro type character. Anyway, good for him. He needed something to get rid of that stigma and this went a long way to help.

"Drug Deal" (Mike O'Brien, Bobby Moynihan, Edward Norton, Taran Killam, Kenan Thompson) So, this is how it's going to be, isn't Mike O'Brien? OK, fine, you got me this time, O'Brien ... yes, I laughed. I laughed at a sketch built around a 25-year-old "Rain Man" reference that's been done to death -- which is probably the point here. And, yes, I enjoyed that the movie he's from turned out to be "Transformers." (You win this round, O'Brien.)

"School Visit" (Edward Norton, Nasim Pedrad, Kate McKinnon, Aidy Bryant, Bobby Moynihan, Kenan Thompson, Noel Wells, John Milhiser) My esteemed colleague (and SNL podcast partner) Ryan McGee is fairly adamant that this is a rip-off of a Dane Cook comedy bit. (I am sort of relieved to say that I am not familiar with this particular example of Dane Cook's comedic stylings.) Anyway, aside from that bit of information, I was just thrilled to see Nasim Pedrad with a large role in a sketch. I don't know how many times I need to point out that Nasim Pedrad is good at her job and deserves better than what she's getting.

"Edward Norton Monologue" (Edward Norton, Alec Baldwin, Miley Cyrus) I swear it's not my life's ambition to pick on Miley Cyrus, but, boy, does she know how to kill a monologue. You've got two pros like Alec Baldwin and Edward Norton having what was a lovely exchange, then Cyrus, who is out of her league here, shows up, announces she's going on tour, then sticks out her tongue again. I just don't get it. She had just hosted. Why not announce your tour then instead of trying to ruin Norton's show? Whatever. Even if it was "SNL" that begged her to show up -- which it very well might have been -- she should have turned down this appearance on principle. It came off like, "Oh, please don't forget that I still exist." On the plus side, at least there was a Chris Kattan reference.

"Halloween on the Steve Harvey Show" (Kenan Thompson, Edward Norton, Aidy Bryant, Kyle Mooney, Noel Wells, John Milhiser) I mean, sure, who doesn't like a good egg pun? I guess that's what this one comes down to -- if you like egg puns or if you don't like egg puns. Personally, I have no real opinion on egg puns one way or another. You know, I really miss those Vincent Price sketches right about now.

"Ruth's Chris" (Edward Norton, Nasim Pedrad, Cecily Strong, Mike O'Brien, Aidy Bryant, Beck Bennett) Aidy Bryant has carved out a niche of being the only normal person surrounded by weirdos. Here's the deal: I usually always enjoy Bryant in these types of sketches, but, just like her characters, I don't like being around the weirdos enough to fully enjoy what she's doing.

"12 Days Not A Slave" (Jay Pharoah, Edward Norton, Kate McKinnon, Vanessa Bayer, Aidy Bryant, Bobby Moynihan, Taran Killam, Miley Cyrus) I guess we should all be looking forward to the "SNL" parody of "Captain Phillips" soon, since that just might be the only movie playing in theaters that "SNL" hasn't parodied. Yeah, I don't know about this one. I'm sure there was a fine idea in here, somewhere, but this just didn't work. Plus it didn't help that everyone seemed to act like they were in their own, different, sketch. And poor Taran Killam ... I'm sure all week he was trying to explain, "Yeah, I probably shouldn't be in this sketch because I WAS IN THE REAL MOVIE." Apparently no one listened. Oh, and Miley Cyrus showed up to twerk because that's what she does now. Honestly, she's starting to remind me of Bart Simpson when he had his "I didn't do it" catchphrase. (I mean, if Miley Cyrus shows up, she's either there to stick out her tongue or to twerk. That's it.) Anyway, this winds up in the last spot more for execution than anything else.