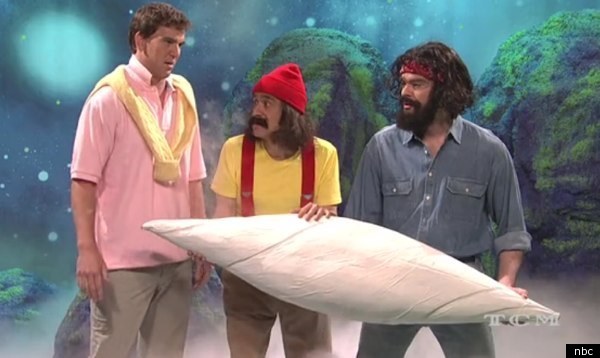 Peyton Manning hosted "Saturday Night Live" in 2007 and he was excellent. This was surprising. Athletes are usually not very good at hosting sketch comedy shows. (Apparently, when growing up, between those long summer two-a-days, athletes aren't trained on the finer points of hosting "SNL," you know, just in case.) But, Peyton Manning, for whatever reason, was terrific. This weekend, it was his brother Eli's turn, who can't just pass on his sibling's grades because life doesn't work like the movie "License to Drive." How was Eli? Alas, Eli wasn't as good as Peyton, but he certainly wasn't terrible. Let's go with the word "serviceable" for Manning -- a word that's a bit too strong when describing the overall quality of this week's show. (Also: I'm quite surprised that "Battleship" actor Rihanna didn't wind up in a sketch along the way.) Let's get to the Scorecard, shall we?

"Text Message Evidence" (Jason Sudeikis, Eli Manning, Abby Elliott, Bill Hader) Emoticons. Any sketch in which Eli Manning has to say the sentence, "The banana is larger," in relation to his own penis, deserves accolades. What makes this funny is that if you put the average single male on trial, this would probably be an accurate representation of his text message transcripts on any given weekend night. "You out?" "You out?" "You out"?

"Little Brothers" (Eli Manning, Andy Samberg) Shades of Peyton Manning's 2007 "United Way" sketch, only amped up few notches on the "dark" scale. Eli Manning helps younger brothers defend themselves from their older siblings and, obviously, Eli has some relatable emotions of his own. (No, seriously, I don't think that was 100 percent acting. Though, that second Super Bowl win has to help, right? )

"Motion Capture" (Eli Manning, Jason Sudeikis, Bill Hader, Taran Killam, Jay Pharoah, Kenan Thompson, Andy Samberg) It was nice to see Killam's Tim Tebow make a return appearance, short lived though it was. I have to admit, this was going pretty much nowhere until Manning "threw the grenade" and emitted the saddest yelp that an NFL player has ever made. I laughed embarrassingly loud at that, I'll admit. After, that, Manning hit quite the groove, which shifted the whole sketch into another, much better, gear.

"Cold Open: Fox and Friends" (Taran Killam, Vanessa Bayer, Bobby Moynihan, Fred Armisen) The "Fox and Friends" sketches are tough because the jokes aren't that far off from the real thing. Though, I can't help but laugh at any reference to Garth Brooks' alter ego, Chris Gaines, even if it's buried in the corrections. (Unfortunately, this led me down an Internet rabbit hole that ended at a Chris Gaines website that inexplicably still exists. Which means that in 1999, at least one person was really looking forward to that proposed Chris Gaines movie.) Regardless, this seemed like a bit of a wasted opportunity to really go after Rupert Murdoch. Actually, the state of Wisconsin seemed to have more jabs thrown at it tonight then Murdoch (with one in the corrections and one in "Update." Poor Wisconsin).

"What Is This?" (Abby Elliott, Eli Manning, Vanessa Bayer, Bill Hader) I'll admit, I really liked this concept. But the execution just wasn't there, unfortunately. It's hard to blame Manning for a sketch because, you know, he's a quarterback and all, but he's probably the reason this doesn't work. The sketch needed an actor who could match Elliott's desperation. I hope they try this again at some point with a lead that's more up for the task.

"Eli Manning Monologue" (Eli Manning, Vanessa Bayer, Bobby Moynihan, Kate McKinnon, Bill Hader, Kenan Thompson, Nasim Pedrad) As stated, athletes should probably be judged on a different scale -- especially the monologue. And, yes, Manning spoke over the applause a couple of times, but he was ... fine. The "questions from the audience" monologue really is the go to "We have no idea what else to do with this guy" monologue. So it's hard to blame Manning here, but there wasn't much memorable or original about his "I'm a real New Yorker, go to Olive Garden" jokes.

"Helga Lately" (Kate McKinnon, Taran Killam, Kristen Wiig, Kenan Thompson, Fred Armisen, Nasim Pedrad, Vanessa Bayer, Abby Elliott) This took balls. If there were a ranking for "ballsiest sketch of the night," boy, this would sure be it. But the truth is, no matter how much I respect this sketch, it was just really hard to sit through. (And I might hate seeing those impressions of the Kardashians more than I do seeing the real thing.)

"TCM Cheech & Chong" (Jason Sudeikis, Fred Armisen, Eli Manning, Bill Hader) Good grief, this just wasn't as funny as it should have been. In the past, these TCM sketches have been fairly great -- especially "The Wizard of Oz" entry. I mean, the joke here is that Manning's character doesn't like the pot and, at the beginning of each movie, asks to be let out of Cheech and Chong's car. OK, then? I mean, that seems reasonable. If I had a category for "most reasonable sketch of the night," boy, this would be it. Alas.

"Herb Welch: Occupy Movement" (Bill Hader, Jason Sudeikis, Nasim Pedrad, Eli Manning, Kenan Thompson, Andy Samberg, Vanessa Bayer) This was by far the worst entry of the previously funny Herb Welch canon. The jokes have always been the same, but it's just that there were so many lack of laughs this time around, that became the only takeaway. And there should have been plenty to skewer, considering the Occupy Wall Street subject matter, but, alas, I found myself thinking, "C'mon, Herb. Just fake your death already so this sketch can mercifully end."

"Weekend Update" (Seth Meyers, Kristen Wiig, Sacha Baron Cohen) I'm sorry, I know we're all supposed to pretend that Sacha Baron Cohen is an actual dictator named General Aladeen. But, he's not. (And thankfully, in the "Good Nights," Manning didn't play this little game, either.) He's promoting a movie, which is fine, I suppose, but it kind of brought "Update" to a screeching halt for the sake of this promotion. (Anyway, it's nice to see Martin Scorsese still doing favors for one of the stars of his film, "Hugo.") Look, I'm not an advertising wizard (I think that's a proper title), but I'm not sure anyone is going to watch that, then say, "I need to see that movie." Also, as the clock ticks on Kristen Wiig's time on "SNL," it's nice to see the Greatest Hits tour be put on hold for a new character, the Tanning Mom, which was the highlight of "Update." Unfortunately, this week, that isn't saying a lot.

"Miss Drag World" (Kenan Thompson, Andy Samberg, Taryn Manning, Bobby Moynihan, Fred Armisen) "Hey! Wouldn't it be funny if we put Eli Manning in a dress?" I have little doubt that this was a large reason that this sketch made it to air. You see, a star athlete in drag is "comedy gold." Oh, wait, no ... it's cheap garbage. (Sorry, I haven't had any caffeine yet this morning and I'm cranky.) You know, these are the kind of sketches one expects when an athlete hosts -- almost as if the athlete thought of it himself. But Manning was better than this. Seriously, "SNL," save this kind of stuff for when Michael Phelps hosts again this fall.