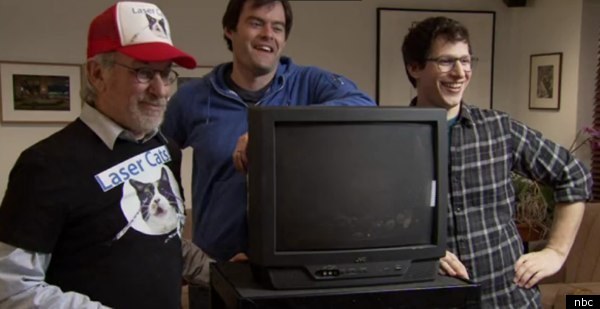 Everyone remembers the last time upcoming "Men In Black 3" star Josh Brolin hosted "SNL" -- except that you probably don't realize that you remember. Tina Fey was right in the middle of a Sarah Palin sketch when the real Palin walked on stage. Later, on "Weekend Update," Amy Poehler rapped about a moose in front of Palin. Yeah, that was Brolin's episode. Last night's show wasn't as memorable, but it was similar in the fact that Brolin seemed to be a bit of an afterthought. For whatever reason, Brolin stepped out of the way and let the cast shine -- which resulted in one of the better shows of the season.

"Game of Thrones" (Andy Samberg, Taran Killam, Bobby Moynihan, Kate McKinnon) This was Samberg's finest work all season. And if in reality there turns out to be a smidgen of truth to this sketch -- that a 13-year-old boy is responsible for the gratuitous nude scenes on "Game of Thrones" -- I would not be surprised. Actually, this sketch results in the world making just a little bit more sense.

(Sadly, this sketch is not on Hulu, but you can watch it here.)

"Slow Motion Hallway" (Vanessa Bayer, Bill Hader, Taran Killam, Nasim Pedrad, Kenan Thompson, Bobby Moynihan, Josh Brolin, Kate McKinnon, Andy Samberg, Kristen Wiig) Concept wise, this sketch about a high school hallway in which everyone walks in slow motion, creating the illusion of "coolness," mignt the best sketch of the year. Execution wise, not quite. And I'm not exactly sure what's missing, but it just feels like a sketch that made everyone laugh at the pitch meeting -- with good reason -- but was never quite fleshed out to its full potential. Still very good! But it left me a bit disappointed.

(Again, sadly, this sketch is not online)

"Digital Short: Gotye Backstage" (Andy Samberg, Taran Killam, Gotye) Is "Somebody That I Used to Know" the best song ever recorded? Probably not? But, yet, I still can't stop listening to it. This is less a commentary on this Digital Short than it is the fact that, given the chance, in the vicinity of Gotye, I would have done the exact same thing that Samberg and Killam did in this sketch. (Also: If I could be reincarnated as any other human being, right now, there's a good chance that I'd pick Gotye.)

"America's Next Top Empire State of Mind Parody Artist" (Andy Samberg, Kenan Thompson, Abby Elliott, Jay Pharoah, Bobby Moynihan, Vanessa Bayer, Fred Armisen, Josh Brolin, Kirsten Wiig) This was a lot funnier than it had to be. Actually, the MVP of this sketch is Bobby Moynihan. That guy sells the hell out of his "Empire State of Mind" parody. Also: What a night for Pharoah.

(Yep, you guessed it: this sketch is not online.)

"Weekend Update" (Seth Meyers, Fred Armisen, Kristen Wiig) Meyers' "What are you doing?" was good, but, as always, would have been better with someone else to trade lines with. And with these last two "Updates," I'm halfway expecting Meyers to say, "I want to introduce a new segment called, "Rushed, but Funny." Well, at least tonight's was funny, but Meyers was zipping along at light speed, for whatever reason. Also: I love "Garth and Kat." Here's a little piece of trivia: "Garth and Kat "is one of the few instances of true improv to ever be on SNL. Armisen makes up stuff on the fly, Wiig tries to follow -- and it's brilliant, if for no other reason than we get to see live improv on television. I hope you enjoyed it while it lasted.

"Digital Short: Laser Cats 7" (Andy Samberg, Bill Hader, Lorne Michaels, Steven Spielberg) I really don't like "Laser Cats" (even though there's a strange brilliance to it that has run its course). But I'm always amazed at the talent that Samberg can get to come on and pretend to like "Laser Cats." Look, I know Spielberg loves "SNL" (as Bill Hader mentioned on a podcast with Bill Simmons), but there's no way that this is anything other than, "Oh, I'll look like I'm a good sport if I do this." To this day, my favorite thing about "Laser Cats" is seeing that Lorne Michaels still has a poster of "Three Amigos" in his office.

Josh Brolin Monologue (Josh Brolin, Jay Pharoah) Even in Brolin's own monologue -- clocking in at barely over three minutes -- he's got the look of someone who just wants to get it over with; though it was odd that Brolin joked that hosting "SNL" is "career endingly stupid." Wait, weren't you the guy who starred in "Jonah Hex," a movie in which a crow flew out of your mouth? I digress! And, even so brief, boy, Pharoah's Will Smith is stellar. Seriously. More of that.

"Cold Open: Romney and Santorum" (Jason Sudeikis, Andy Samberg, Bill Hader, Kristen Wiig, Kenan Thompson, Bobby Moynihan) Good God, another Romney cold open. Hey, Green Day is great and all, but Mitt Romney is very boring. Even with a well-placed, "give this tip to your husband," joke ... Enough! But I had almost forgotten how great Hader's Rick Perry is/was. And what makes this halfway entertaining is that this is basically a political version of the "four guys singing" sketch (with timing not quite as important).

(Yes, there was music in this sketch, too, so it's not online)

"Principal Frye Prom" (Vanessa Bayer, Jay Pharoah, Josh Brolin, Kenan Thompson, Nasim Pedrad) I'm happy for Jay Pharoah for the fact that he officially has a recurring character that's not a celebrity impression (as opposed to an impression of his high school principal). At least for me, however, it still comes across a bit esoteric; but my joy for a big Pharoah night supersedes any confusion I sill have about this character.

"The Californians" (Bill Hader, Kristen Wiig, Fred Armisen, Vanessa Bayer, Josh Brolin, Kate McKinnon, Kenan Thompson) Watching this, I had assumed that this was a parody of an actual reality show that I had never heard of. I actually looked it up. And I have to assume that this sketch has nothing to do with the late '50s television series about the gold rush or a 2005 movie starring Noah Wyle. I get the jokes (I think), but, perhaps not living there, they were a bit lost on me.

"Piers Morgan" (Taran Killam, Jason Sudeikis, Fred Armisen, Josh Brolin, Jay Pharoah, Nasim Pedrad,Andy Samberg) "I also know what it's like to have a black man in me." It's these type of lines that make me question why I enjoy "SNL." Stop it! You're smarter than that! Look, I know the Trayvon Martin case is a bit of a tricky subject for a show like "SNL" to handle. And the segment with Sudeikis' Florida tourism official was ... OK. But it should have just been left at that.