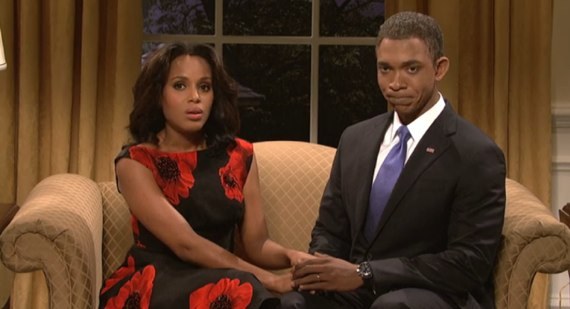 Whelp, it's official ... this is officially one of the most troublesome seasons of "SNL" in recent history, even though it has nothing to do with the quality of the show. (Not that the quality has been great, but it's been OK considering all of the cast changes.) Lorne Michaels and "SNL" have no one to blame but themselves, but the issue of the lack of diversity in the cast -- specifically the lack of an African American woman in the cast -- isn't going away. This season will be forever tarnished, which is a shame for numerous reasons. (And that "Arcade Fire or New Cast Member" sketch from the season premiere seems even dumber now than it did when it first aired now that it's not all a big joke like they thought it would be.)

Kerry Washington was superb as host, even if the material wasn't always the best (and I kind of feel bad for Washington that she's been dragged into this whole mess, but she seems OK with it all.) And I'm just afraid that the self-referential cold open was meant as a "Let's address it and people will forget about it and we can move on," because that's not going to work this time. "SNL" is legitimately taking a hit to its legacy and something needs to change. (It's one thing to be criticized for quality, that's happened many times in the show's past. It's another to be accused of having a less diverse cast than George W. Bush's Cabinet.) As for that cold open:

"Cold Open: Michelle at the White House" (Kerry Washington, Jay Pharoah, Taran Killam, Al Sharpton, Ensemble) I suppose this had to be done, but I just hate that "SNL" got "SNL" into this whole mess in the first place where, now, "SNL" has to satire "SNL." Here's what sucks about the entire situation: First, at this point, if "SNL" does nothing and doesn't hire an African American woman, they look like jerks. If they now do hire an African American woman, will she feel like she was only hired because of the intense media scrutiny? Is that fair? And, yes, it was dumb to hire five new white guys, but getting hired by "SNL" was probably, individually, the best moment of their lives and I'm sure they all feel bad about this, too. Anyway, I wish this wasn't happening, but "SNL" has no one to blame but themselves. Again, this issue isn't going away and, again, I hope this sketch isn't supposed to be interpreted as "We good?"

In four years of writing this column, I've never not assigned a score to a sketch. I'm going to pass on this one because it means nothing without any action. And I don't want to reward what might be just a way to get ahead of a media story by trying to own it. Well, they certainly own it now. Now that they do own it, what will they do with it?

"Ice Cream" (Kyle Mooney, Beck Bennett, Vanessa Bayer, Taran Killam, Kenan Thompson, Nasim Pedrad, Kate McKinnon) This was by far the most original concept that's been on "SNL" this season. Honestly, extend this out another 87 minutes and you've got yourself a Sundance Film Festival hit. (Take that with a grain of salt, but it's probably true.) Of course, Shane Carruth might come knocking for at least partial royalties, but, whatever, this was really, really solid and it's nice when it's obvious some thought (and a lot of weed, I assume) went into the creation of a sketch.

"My Girl" (Jay Pharoah, Kerry Washington) It was good to see Jay Pharoah get so much airtime and this just might be Pharoah's best moment on the show in his three seasons. It's not an impression; it's not Obama -- it's just Pharoah finally getting a budget to make his own pre-filmed video.

"How's He Doing?" (Kenan Thompson, Jay Pharoah, Kerry Washington) I wasn't expecting this sketch to become a recurring one, but, yes, considering Obama's week, it's was probably a good time to bring this one out. (Sadly, I am one of the few people on Earth who still hasn't watched "The Wire" so I did not get to revel in that particular joke like so many others. I will take your word for it, Internet.)

"Weekend Update" (Seth Meyers, Cecily Strong, Kate McKinnon, Jay Pharoah, Kenan Thompson) BOOM! That's right, Red Sox, you look like Mumford & Sons. HAHAHAHAH, this totally makes up for my beloved Cardinals losing the World Series. (Just go with me here, I'm still in a lot of pain.) Also: Cecily Strong looks comfortable enough in the "Update" desk that it's not even worth mentioning anymore, so that will be the last time.

Jay Pharoah does a killer Shaq: spot on -- maybe too spot on (which Pharoah has a tendency to do, which I know is a weird complaint). And McKinnon's Chancellor Angela Merkel started slow, but ended manically enough to make the whole thing entertaining.

"Principal Frye: Fall Carnival" (Jay Pharoah, Kerry Washington, Vanessa Bayer) I used to not particularly care for Principal Frye. (True story: I once met Jay Pharoah at a party and the first thing he said was "You hate Principal Frye," which made me feel bad, but then a little cool that Jay Pharoah had any idea who I was.) The reason I used to not care for Principal Frye is that in its first iteration Pharoah looked nervous -- which was understandable when he was a featured player not knowing if he'd be back the next season or not. Now Pharoah commands the stage as Frye and looks like he's having the time of his life and I do think his presence influences the audience. (Especially since the real life Principal Frye wasn't our principal and we just have to take Pharoah's word for it that this is a good impersonation.)

"Career Week Speaker" (Nasim Pedrad, Aidy Bryant, Kerry Washington, Mike O'Brien) I like Nasim Pedrad in this sketch -- she always brings an energy when she's allowed to star; which, yes, is few and far between -- but I wish there was more going on than just this character dancing around.

"Kerry Washington Monologue" (Kerry Washington, Bobby Moynihan, Vanessa Bayer, Kenan Thompson) Washington kind of, sort of plays off her "Scandal" character and, well, there's not much going on here. "SNL" certainly wasn't going to do anything remotely controversial after that cold open. The result is that I barely even remember what I'm writing about right now.

"Cartoon Catch Phrase" (Kerry Washington, Aidy Bryant, Vanessa Bayer, Mike O'Brien) I really wanted to like this one, probably because I would love to be on this game show if this were a real game show. It just seems like there were many ways to go with this other than "a contestant's husband is cheating on her." What's interesting is that the game show didn't matter, because that was never the premise of the sketch. However, when coming up with a throwaway game show idea, they came up with what could have been a really good one, but didn't do anything with it because that wasn't the point.

"Date or Diss" (Taran Killam, Cecily Strong, Aidy Bryant, Kerry Washington) Sketches like this have been the biggest problem with "SNL" this season (Well, other than, you know ...) The setup is here, but there's really no payoff (even though Aidy Bryant tried her best) other than exaggerated accents. There's been a lot of sketches like this so far this season: decent production values but no real point or punchline.

"Miss Universe" (Nasim Pedrad, Taran Killam, Vanessa Bayer, Cecily Strong, Kerry Washington, Kate McKinnon, Noel Wells, Aidy Bryant) Honestly, the less words I write about this sketch the better. This is one of those, "I wonder what got killed at dress rehearsal if this one made it on the air" type sketches.