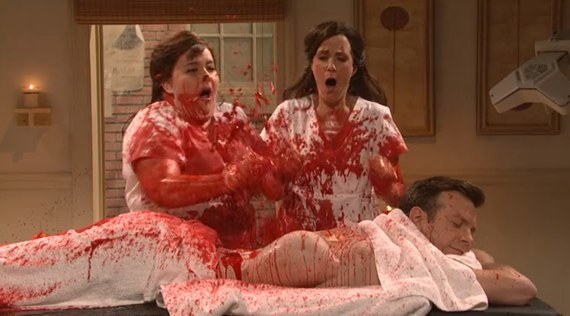 Less than a year ago, Kristen Wiig was given an emotional and touching graduation-style sendoff from "SNL" that very few cast members ever received. So, that's why it was a little weird seeing her "back in school" so soon -- pulling the same old tricks.

Last year, we watched Wiig perform all of her best-known characters one last time. When I first heard that Wiig was coming back already to host, my hope was that she would have integrated herself into what this version of the cast has been doing. Basically: keep her old characters retired and show us some new things. Nope. Instead, we saw five of Wiig's recurring characters. Honestly, this is like grading a greatest hits album of a band whose deep cuts you prefer. (I don't really blame Wiig for this. I can see the writers having "How do I get my stuff on the air?" flashbacks from last season, resulting in the words "Target Lady" being yelled at the pitch meeting.) Well, whatever. Onward to a very recurring and uninspired Scorecard ...

"Weekend Update" (Seth Meyers, Bobby Moynihan, Kristen Wiig, Seth Armisen) Did Seth Meyers have a cold? I ask this because his voice seemed off. If so, here's what I've decided: I like Seth Meyers with a cold. His delivery was just slightly slower, which made it at least feel like he wasn't rushing through any of the punchlines.

I do enjoy Anthony Crispino, though this may have been one of Crispino's weaker efforts, no matter how high his voice gets.

Now, one recurring character I didn't mind seeing was the return of Garth and Kat. If for no other reason than it's one of the rare opportunities that we get to see true improv on "SNL." In a perfect world, Wiig would have had all new material tonight -- which we know she's capable of -- and this would have been her one tip of the cap to her old characters. Again, whatever.

"Kristen Wiig Monologue" (Kristen Wiig, Jonah Hill, Maya Rudolph, Lorne Michaels, Ensemble) I guess Jonah Hill is in town? Regardless, I'm a sucker for the high-energy monologues with the entire cast involved (and the backstage llama). Though, "SNL" has a tendency to overuse the "I don't remember your name" joke for whatever reason. And even while pregnant, Maya Rudolph brought her A-game.

"Mother's Day" (Kristen Wiig, Kate McKinnon, Tim Robinson, Bill Hader) Kate McKinnon makes a good mom. Look, there's not a lot here other than "moms will be moms," but there's nothing wrong with that. And if nothing else, Wiig and McKinnon have a nice chemistry together.

"Acupuncture" (Kristen Wiig, Jason Sudeikis, Aidy Bryant, Kate McKinnon, Fred Armisen) So, this happened. I have no idea if I should award this Sketch of the Night or put it in The Ugly slot. Good God, this was ... something. But at least it was "something" everyone seemed to commit to 100 percent. How about this? How about we give it "6" and move on with our lives and never speak of this again? (Especially that giant exploding cyst.) Can we all agree on this? Please?

"New Disney Show" (Cecily Strong, Bobby Moynihan, Kristen Wiig, Jason Sudeikis, Tim Robinson) A few weeks ago, a terrible movie called "Scary Movie 5" was released at theaters. A lot of the jokes "Scary Movie 5" used about horror movies were also used in this sketch. I do appreciate the fact that something at least halfway original was attempted, but there really wasn't any new ground covered here.

"Lawrence Welk" (Fred Armisen, Kristen Wiig, Vanessa Bayer, Nasim Pedrad, Jason Sudeikis, Cecily Strong) I was tempted to find whatever I wrote about the last time this sketch aired a year ago and just copy and paste that here and see if anyone noticed. But then I remembered that at least last year's version had an appearance from Jon Hamm. Anyway, the greatest hits keep on coming.

"Double Date" (Tim Robinson, Bobby Moynihan, Kristen Wiig, Cecily Strong, Taran Killam) This is a classic case of something sounding really funny at a pitch meeting, but not working on the air. I can actually imagine Tim Robinson explaining this. My imaginary thoughts of Tim Robinson explaining a sketch about 6th graders going on a date with two adult women makes me laugh much harder than the final product did, unfortunately. A final product that just went nowhere. (Though, I'd still rather see a Tim Robinson misfire than the same old tired sketches that were being force-fed to us the entire show.)

"Cold Open: Benghazi" (Bill Hader, Kenan Thompson, Taran Killam, Nasim Pedrad, Tim Robinson, Bobby Moynihan) This felt too tame, really, which has kind of been problem with the political satire all season. The main point was kind of hit: the endless amount of hearings for an attack in which we know the culprit. But this was sloppy (with its message and even its props) and would have needed to be drastically tightened up to get its point across. Sometimes a writer just needs to be asked, "What are you trying to say?" After he or she comes up with that answer, then just say it instead of dancing around the issue.

The Californians (Fred Armisen, Kristen Wiig, Bill Hader, Vanessa Bayer, Taran Killam, Maya Rudolph, Kenan Thompson) I have nothing more to say about this sketch. Ever.

"Socialite CD" (Kristen Wiig, Nasim Pedrad, Kenan Thompson, Cecily Strong, Jay Pharoah, Aidy Bryant) I've never understood parodies of reality stars because the people being parodied are already such caricatures of themselves, so what's the point? This sketch was no different. And this went on and on and on. Though, at least it had a "Coach" reference.

"Target Lady" (Kristen Wiig, Bobby Moynihan, Aidy Bryant, Jay Pharoah, Vanessa Bayer) It's the Target Lady, same as it's always been the Target Lady. This particular Target Lady sketch was better than some of the others that had come before, but not as good as some installments. (If you're wondering what's the point of the last sentence that I just wrote, I'm wondering the same thing.) Again, nothing new here and that's what's so bad about it. If we're going to see a now eight-year-old sketch idea (Target Lady first premiered n 2005), at least do something new. And if we had to have recurring sketches, would it have been terrible to use "The Two A-Holes"? Especially considering that next week might be Jason Sudeikis' last show?