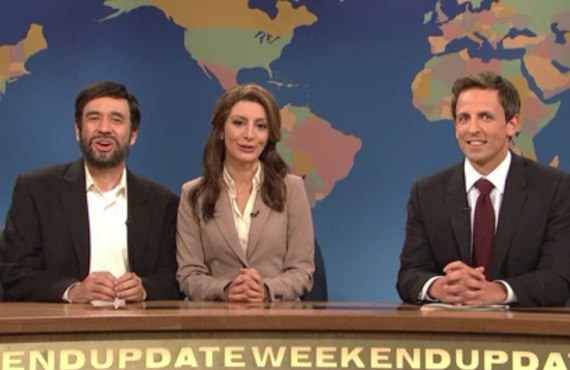 Well, that's that for the "SNL Weekend Update Thursday" season. And, well, it was ... uneventful. In 2008, these specials brought out guests like Bill Murray and Will Ferrell. In other words: It truly felt like an event. This year? It really felt no different than anything that aired on the Saturday night show. In fact, most of the time I was watching tonight, I was thinking, Why couldn't this have waited to air on the Saturday night show? Not to say that's a bad thing, but there just seemed to be a lack of urgency this season. Which is no fault of the cast, but I feel NBC wanted sketches focused on the election, but they didn't give the writers and the cast the ammunition to do so by, unfortunately, airing these two specials before the debates. Regardless, on to one more Thursday night Scorecard...

"Cold Open: Obama Rally" (Jay Pharoah, Vanessa Bayer, Fred Armisen, Kate McKinnon, Kenan Thompson, Bill Hader, Bobby Moynihan) So, if last week was all about Romney, well, this sketch was certainly Obama's turn to be skewered. Though, it did have a feeling that this was just Obama's Turn To Be Skewered -- so, it happened. I mean, there wasn't a specific gaffe that was addressed, it really was just Obama's Turn To Be Skewered. Aside from that! Jay Pharoah was fantastic. In his second appearance as Obama (well, third, if you count him showing up in a commercial parody to say "I approve this message") all the jitters and nerves that were painfully obvious were long gone. This was a guy who felt comfortable in his own skin as this character and it showed. The Obama we saw in this sketch was the best portrayal of Obama we've seen on "SNL" to date.

"Weekend Update" (Seth Meyers, Fred Armisen, Nasim Pedrad, Kenan Thompson, Cecily Strong) What was most remarkable about anything tonight was Nasim Pedrad. Pedrad -- who's of Iranian descent -- portrayed the interpreter for Iranian President Mahmoud Ahmadinejad. What was, on the surface, just another "Weekend Update" segment felt like more of a personal plea from Pedrad herself to chill out on the unnecessary rhetoric. Making sure to mention the percentage of Iranians who are under the age of 30 and just want access to Facebook. And, especially, making sure to point out how ridiculous the latest cover of the New York Post reads. It's nice to see Pedrad get slyly political ... and I hope she continues. I've often wondered what her niche will be on the show -- I think tonight she may have found it.

I've always enjoyed Kenan's Cornel West, but, again, I'm just not sure why it needed to be on the Thursday night special -- the same goes for Cecily Strong's "Girl You Wish You Wouldn't Have Started A Conversation With At A Party." Now, that's not to say that I don't want to see Strong's character be a recurring guest -- her multiple use of "Is it OK if I use the N word?" was a nice touch -- but, again, it gets to the larger problem: Why weren't these Thursday Night Specials aired after the debates and used to drive home the political satire? All I can say is, "Alas."

"Replacement Refs" (Tim Robinson, Kenan Thompson, Fred Armisen, Bobby Moynihan, Aidy Bryant, Taran Killam) So, this sketch is a bit of a shame. First, a version of this was supposed to have been on the Joseph Gordon-Levitt hosted show from last Saturday, but was cut at dress. Obviously the furor over the NFL replacement referees hit a crescendo after the Monday Night Football debacle that cost the Green Bay Packers a win. Unfortunately, it was so much of a debacle, the dispute with the regular referees' union was resolved on Wednesday, making this sketch, sadly, already a bit dated. Though, sketch wise, it was still fairly great -- it's just too bad that it didn't air last Saturday. (And it's too bad "Replacement Refs" can't become a recurring sketch.)

(Note: The Thursday night shows will not be included in the yearly "SNL" Scorecard rankings.)