In its fourth straight live program since returning to air after the writers strike, "Saturday Night Live" is once again shaking up the political race with its blatant, unmitigated bias — this time with its blatant bias against Eliot Spitzer, whom it portrayed as someone involved in prostitution. Oh, wait, Spitzer was involved with prostitution. I guess that means SNL isn't biased, it just runs sketches based on existing political situations and exaggerates them for comic effect! Whew, glad to have settled that. But to those who were wringing their hands over a perceived bias in favor of Hillary Clinton of late, fret not — last night's program not only featured a full-on endorsement of Barack Obama, it also completely derailed the candidacy of John McCain by portraying him as old. Damn you for thwarting our democracy, SNL!

For those of you who missed it, there actually was a controversy over an ostensible pro-Clinton bias on SNL after three shows which in turn depicted Barack Obama getting preferential treatment from the press, being a weak and inexperienced president, and what many perceived to be an endorsement from guest host Tina Fey, who said that if Clinton was a bitch, well, so was she, because bitches "got stuff done" and that "bitch was the new black." Clinton herself was also welcomed to the show for a well-received cameo. Sure, Obama had been 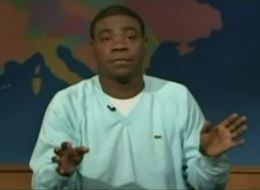 on in November, but timing is everything. Just to be safe, this week they gave Fred Armisen's Obama and Amy Poehler's Hillary a rest, instead inviting 30 Rock star and former cast member Tracy Morgan on to address the week's turbulent race issues involving Geraldine Ferraro and Obama pastor Jeremiah Wright. Said Morgan, in a direct nod to Tina Fey: "Bitch may be the new black, but black is the new president, bitch."

That clip plus the Spitz n' Silda cold open, Spitzer jokes on "Weekend Update," and a fantastic McCain impression by Darrell Hammond are below. Next week, just to mess with your head, SNL will be re-running the infamous Tina Fey episode that started it all. Good luck trying to figure it all out, Pennsylvania voters. Watch:

For those who tuned into SNL for the host, Superbad and Knocked Up star Jonah Hill, his very fancy opening monlogue is here and his very impressive Borscht-belt comic tour-de-force is here. Also Mariah Carey was the musical guest, wearing a very short skirt.

Official NBC versions of the clips coming when they are posted online.