Time magazine caused quite the stir last week when the magazine used a cover photograph to accompany a story on attachment parenting that featured a mother breastfeeding her 3-year-old son.

Many members of the media reacted to the cover photograph. "View" co-host Elisabeth Hasselbeck said, "if you can spell milk, you shouldn't be breastfeeding," in reaction to the cover.

During his signature "Really!?!" segment, Meyers wondered why Time magazine would select such a controversial cover ahead of Mother's Day.

"Really, Time magazine!?" Meyers asked. "This is the image you went with for Mother's Day? Look, I have nothing against breastfeeding, but there are more appropriate places to breastfeed your kid than the cover of Time magazine."

He added, "Really—this photo doesn't say 'I'm a loving mother feeding my son.' It says 'I'm the crazy queen from Game of Thrones.'"

After mocking the mother and child photographed on the cover, Meyers directed his comments back to the magazine publishers. "And Time," he said, "don't get me wrong. I understand you have to do what it takes to sell magazines and it's a good cover. But if you wanted a great cover, you would have photoshopped out the chair." 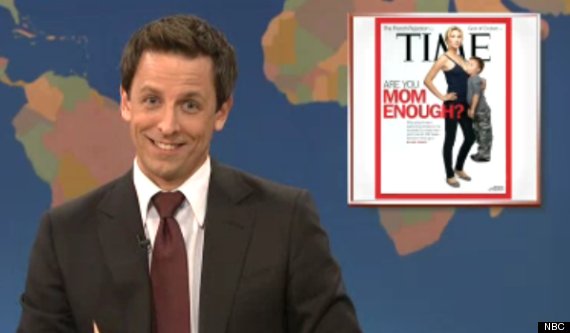