Playing off the recent outburst against Obama at a McCain-Palin rally by Gayle Quinnell, who said she's read of Obama "that he was an Arab," Thursday night's edition of "Saturday Night Live," featured a skit in which a crazy McCain-Palin supporter in a red t-shirt wandered onto the set of "Weekend Update" to proclaim such things as Barack Obama "is 50% Egyptian, he's going to change the White House to a pyramid."

The moment McCain took the mic from Gayle: 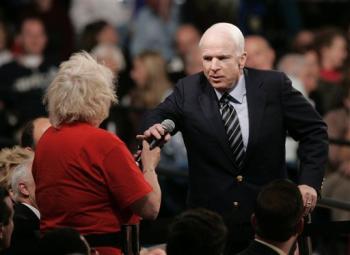