Snooki, or Nicole Polizzi, a newly-famous star from the MTV series "Jersey Shore", has perhaps reached a new level in her dumb-girl persona. Earlier today, she tweeted that she is tackling her very first book -- Nicholas Sparks's "Dear John", which is the basis for the recently-released movie of the same title. Check out a photo of her tweet below.

Snooki, along with the other "Jersey Shore" cast members, are earning a reputation for their lack of intelligence -- watch a segment where they appear on the "Jay Leno Show" and are unable to answer simple trivia questions -- but we can't help but wonder if it's somewhat of an act. This can't possibly be her first book ever... Can it? 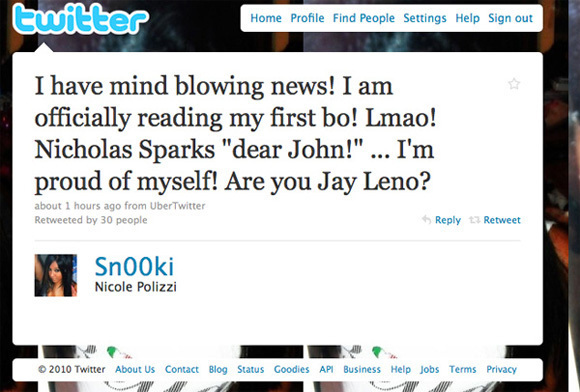