Ecuador. The equator. The Galápagos Islands.

There is unusual magic in these words. You can read and read about the blue-footed boobie. About Darwin's five-week visit here, and about the seals that yawn when you go near them and do not flee. 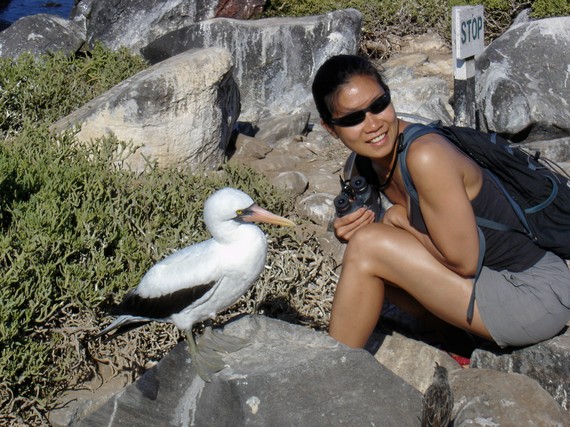 Blue feet. Animals that are not afraid. Darwin or not, it does not sound like our world. So though you've paged through the books, you decide you've got to inspect it for yourself to see if it is real.

If you are like me, you lean toward an Ecuadorian ship to sail there -- a small one -- so you can be close to pebbly shorelines and low to the sea. I lean toward this. I lean farther, and a few years back, I fall for the Parranda, a 16-passenger 1950s-era motor yacht run by Ecuador's Quasar Nautica Line.

From the web photo, it has a wood-with-brass-trim island steamer air, but a less than deluxe price for its eight-day cruise. I fish out my Hercule Poirot-style tropical hat and initial the forms. 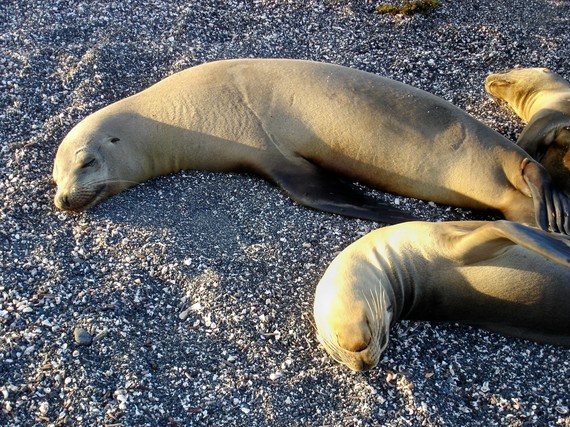 A national wildlife sanctuary since 1934, the volcanic Galápagos Islands rise up 600 miles off the Ecuadorian coast. There are 13 of them, not including islets and protruding rocks. San Cristobal Island, where I fly to meet the ship, looks like an Army blanket from the air. It's wrinkled inland, but tucked in tightly along the coasts.

The Parranda has its tightness, too. Cabins are ship-neat, not big on decor, but everything fits, and there is a canopied top deck where we can spread out after snorkeling in the heat of the day. 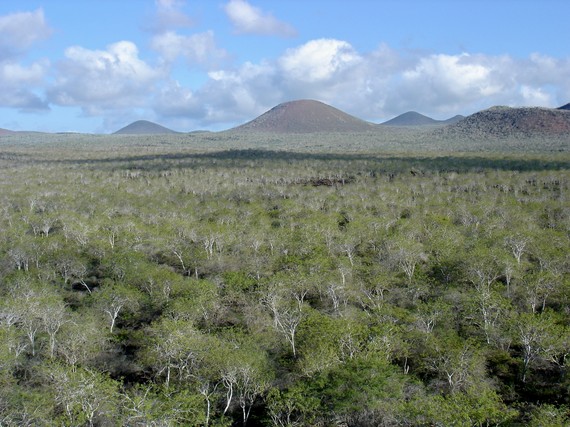 Most of us put on our swimsuits as soon as we're unpacked, and rummage through a box of masks and flippers. "You will be snorkeling with sea lions," warns Gabriel Ribadeneira, our naturalist and guide. "Sometimes they swim up and blow some bubbles in your face. This is okay. They are playing."

It's certainly okay with me. And although I don't see seal bubbles in the choppy water, there are black marine iguanas and aluminum-bright backs of darting fish.

Suddenly, one of the snorkelers slaps my flipper with his hand to get my attention. It's George Larson of Laguna Beach, Calif. The underwater parts of George are being circled by a strange gray shape.

"Hammerhead shark," he sputters, pulling off his mask. It isn't a big one, but we yell to Gabriel, who is floating in the raft nearby.

"Good sighting," he shouts back. "If you enjoy sharks, there is about a four-foot white-tip over near those rocks." 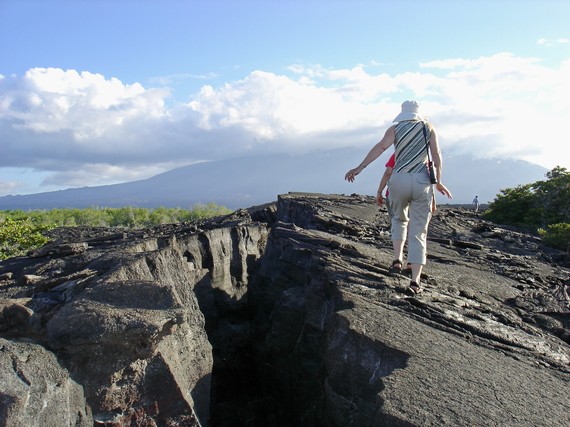 I'm about to kick away from where Gabriel is pointing when I hear someone laughing behind me. Louise Biddle, who lives near London, points to a black and white underwater blur. It's a swimming Galapagos penguin. A penguin on an important errand.

As Gabriel informs us over dinner, "The Galápagos is the only place in the world where you will see penguins next to a cactus."

"Yeah," says Louise, "or where you can feel one brushing against your wetsuit."

On the Parranda's upper deck, our lounge chairs are arranged in rows beneath a gray-green bell.

This is the bell that calls us to breakfast and dinner.

This is the bell that rings in a stiff wind.

And this is the bell where a gull perches at night, fluffing its feathers until the minute of dawn. 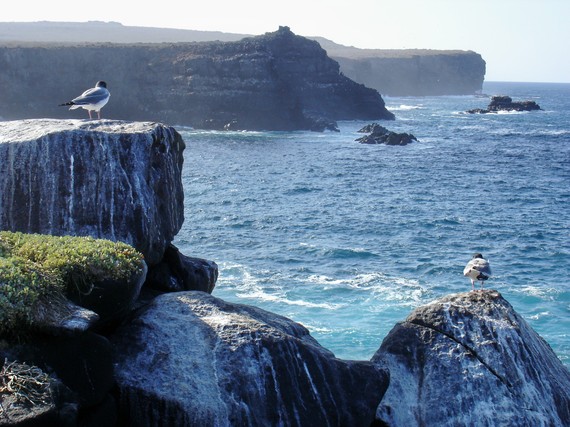 Nearly every day there is a new island to explore. Genovesa, where we wobble on lava rock that's laced with Swiss-cheese holes. Isabela, where there are blue-footed boobies balanced in trees.

Fernandina shows us sea turtles and a tail-flicking animal authorities are eager to catch because it doesn't belong there: an orange tabby cat. We feel like we are in a book for children. Cows can appear in any chapter, but so can unicorns. Naturalists know as much as wizards, and you wonder if your Galápagos species checklist is, in the least, complete.

When we land on Santiago, Gabriel is justifiably proud. "This," he announces when we break for a drink, "it is the largest pig-free island in the world."

I'm proud of Santiago, too, of its Guinness Book success. But my favorite is Floreana, where there's a fanfare of frigate birds with bright-red bubble necks for mating display. 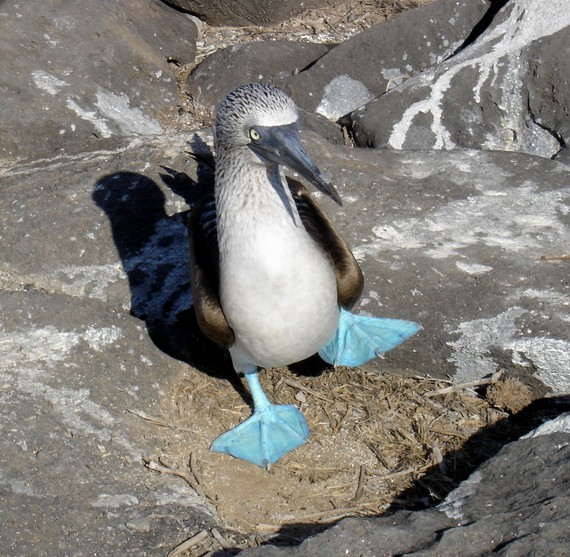 Here the marine iguanas hawk and spit like subway riders ("it's to get rid of salt," says Gabriel), and we spot seals that are bobbing up in waves like rounded rubber rafts. Some ride breakers all the way in and then swim out for more.

Next time we snorkel, three of the sea-lion surfers torpedo toward us, spinning upside down and peeling away before our hands can touch their tails. Their bubbles trail behind like capes of superheroes, or like skywriting in the sea.

One night, we are scheduled to cross the equator twice. I check our timing with the captain, since there's an experiment I want to try. "This is the Parranda, not the Beagle," laughs Gabriel at dinner. "You have some theories, like Chuckie's, about the birds or fishes?" Gabriel calls Darwin "Chuckie D."

I have zero theories. But an hour later, when it is dark, I'm running water into the galley sink.

North of the equator, according to physics books, you get counter-clockwise whirls in drains. And if you're south, taking a shower in Peru, you'll see the opposite spin. 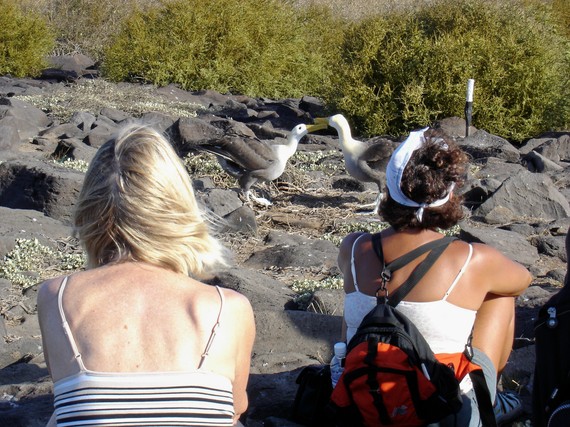 You may know this. Or you may not care. But it is time, and I am imagining, I am guessing. I am pouring water into the drain.

The sink holds bubbles from seals, I think, and wakes of white-tip sharks. The water of the Galápagos -- of the equator -- begins to curl. But it is unlike I imagined. It is unafraid.

Like the vane that swings from magic toward science.