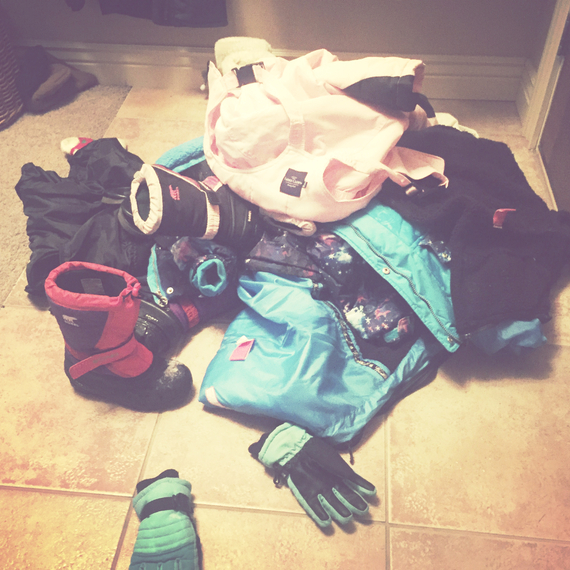 I fall for it every time; I get sucked in as soon as the text buzzes on my cell phone, the email lands in my inbox, and the answering machine picks up the recording (no more need to wait for the scrolling list at the bottom of the TV).

"Due to winter weather conditions, school will not be in session tomorrow."

The kids yelp and run around in circles. "SNOW DAY!!"

Mentally I do a little happy dance as I fantasize about sleeping in and snuggling up. I envision making a big pot of soup and catching an old movie. I love the snow; it's magical when it falls thickly and blankets the ground. I love it even more when I can stay home. Thoughts of relaxing with my family for an unexpected day in make me all warm and fuzzy.

The imagined cozy scene is short-lived and not realistic. In the morning I'm quickly reminded of how things really go. Haley, my 5th grader, is literally bouncing off the walls; she careens into the kitchen after banging into the doorframe, slides across the tile floor in her socks and wipes out, smacking her elbow on a chair on her way down. She's wounded and howling.

Coming off of winter break, the girls have already been out of school for 2 weeks. This is our 17th day of togetherness, but who's counting?

Suddenly she's pulling her snowsuit over her fleece jammies and stuffing her bare feet in snow boots. "I'm gonna make a snow angel!" Her enthusiasm is boundless, but so is my exhaustion as I watch her dig through the winter gear, flinging coats and hats and gloves far and wide until she finds, at the very bottom, her scarf.

"Come here and just chill." I call her back to the kitchen.

"Haley, you are a diva," Sydney says, standing quietly in her bra and boy shorts, watching as her sister cavorts around the kitchen. Sydney is the antithesis of her sister in personality. 4 years older, Syd has Down syndrome which makes her pretty chill, but she's also calm by nature.

Smiling, I hold out my hand to Haley. "Here's your 'chill' pill," I say, handing her daily Ritalin.

"Yes, it actually is your 'chill' pill," I say, still holding my palm out. Why exactly am I engaging?

"No, it's NOT!" she laughs. "It's my chill and grill pill." Grabbing it from my palm, she gulps it down with a swig of milk and takes off again, running to the back door. Looking through the glass she says, "Oooh! OOOOOOhhhhhh! Look at the snow! It's ba-ba-ba-blowing. Look at the drifts, the way the wind moves it and the, . . hey, birdies! Hello birdies!"

She does eventually get outside, dragging Sydney along with her; Sydney who hates the cold and hates the snow and hates being bundled up even more. Wrapping a scarf around her neck, I say, "Honey, it's really cold out there, you have to cover your skin." Sydney yanks it off in an uncharacteristic display of defiance, pulling her own hair in the process.

"Oookay. Let's just zip you all the way up then."

They waddle outside and around the back to a sweet little sledding track that runs between our house and a neighbor's. We're letting them go out by themselves this year, checking occasionally out the window. Assuming that if anyone is screaming or bleeding I'll hear about it, I feel pretty comfortable taking advantage of the free time to talk on the phone while I take the Christmas tree down.

Removing bulbs of all sizes, I place them gently in their boxes. Unwinding the lights from the branches, my earphone feeding me my sister's voice from Oregon, I make my way past the window and look out. I see the girls together, having a blast. I can vaguely hear their shouts and laughter as they slide on plastic discs down the hill. I continue my conversation, thinking all is well until I hear Steven come stomping up from where he's working downstairs, with a clear view of the back yard.

"What now?" I say to my husband. And into the phone.

"She's got garden tools!" Steven says, going around to the front, yelling out the door.

"Haley! Come up here and bring those with you. Right. Now!"

"What's going on?" I ask him. Then I see. Haley is using the large sharp metal tools as walking sticks--or pickaxes--stabbing the snow to pull herself up and climb the hill. Sydney, watching from below, holds a sled and looks miserable. She's done.

Once inside, Sydney sheds her wet clothes in a heap by the front door and disappears. The sound of a laugh track from some Disney show or another emits through her closed door. She's warm, she's dry, and she's away from her sister. She's happy.

Haley comes dragging in after returning everything to the garage. Dejected and sad, she says, "Sydney won't play with me. There's no one to play with!" For emphasis she adds, "Huummppph," and tries to fold her arms, but her snow suit is too big.

Electronics to the rescue; Haley got a Kindle Fire from Santa. She's already doing amazing things on it, including downloading books from Amazon like Robinson Crusoe and David Copperfield. She also plays Candy Crush and Mine Craft, but hey, they stimulate her mind, too, right? Sydney's had an iPad for a few years now and uses the math and spelling apps, but left to her own devices, she's either singing along to a music video, or filming a DIY cable segment, for example, "How To Make A Cheese Quesadilla."

It's true, we're a high-tech family. We use phones, laptops, tablets and game devices daily. My sister just told me how she's limiting her son's screen time. I know we should, too. But not today.

Sydney comes out of her bedroom in a daze and opens the fridge. She stands and stares. Then she reaches very slowly inside, her hand outstretched towards the egg carton.

"Do you want something to eat?" I ask.

Fragments, words, bits and pieces of sentences float around me. I have lost the ability to form complete thoughts and respond patiently and coherently to my children. Tuning them out has become not just a survival skill but a habit.

As they continue talking at me, an image comes to my mind of the aliens in the movie, 'Mars Attacks.' Upon hearing Slim Whitman's piercing yodel, they drop to their knees, clutching the clear globes that protect their huge, exposed gray matter. In agony the creatures writhe on the ground until their pulsing brains explode, green goo coating the inside of their helmets.

Snow ice cream and blanket forts and frozen bubbles. Projects and puzzles and playmates. This is what they need from me and it's what I just can't (or won't?) give them. Part of the reason is probably my age and the fact that I'm just plain wearing out on the mothering front, but it's also because I've never actually loved getting down on the floor with my kids or going to the park or making crafts or baking cookies. And though I've spent a fair amount of time feeling guilty over it, I've come to terms with it. I know who I am . . . and so do they. Why I was thinking that staying home, confined to my house with my bored, squabbling children was going to be fun, I can only guess.

"Look, look! Mom! Come here, I want you to watch. You have to come here to see."

Haley has moved to the hallway, incessantly filling the air with words. I glance up.

She's lying on her back and yells, "See! I can open and close the door with my FEET!"

"Can you close your mouth with your feet?" Steven says as he walks past.

I chuckle at my husband's quick wit and my text tone sounds.

I pick it up, swipe and read:

"Due to winter weather conditions, school will not be in session tomorrow."

More:
Parentssnow daycabin feversnow
Newsletter Sign Up
Raise the kind of person you'd like to know
Subscribe to our parenting newsletter.
Successfully Subscribed!
Realness delivered to your inbox