Unless you're on a ski trip, snow and travel generally aren't a great mix. Or so I thought.

As luck, or Mother Nature, would have it, a trip to visit my mother was bookended by blizzards and I was snowbound. Hadn't I loved snow days when I was a kid? Even as a mom, snow days were a welcome reprieve from frantic morning routines. But a snow day when I had things to do? How dare this happen? And how did I manage to pick this very week to visit? I almost succumbed to angst and frustration.

I hadn't seen my mom for six months and was now stuck just a few miles away. I'd scheduled a lunch date with an old friend and hoped to catch a cup of coffee with a few others. My plans were drifting along with the snow. Schools closed, flights were cancelled and streets awaited the plow. Weather folk declared "snowmageddon," reporters interviewed the stranded, photographers shot barren grocery shelves and Ace was not the place to find a snow shovel.

Nearby, they evacuated a Macy's store because of heavy snow on the roof, while thousands of homes lost electricity. Even though my hosts' lights were on, I was powerless. In the 12 Step tradition, "powerlessness" requires both admission and surrender. In this case, I was forced to remind myself (obviously!) that have no control over winter's crushing blow and I had to give up trying to outwit the forces of nature. If only I could get to the corner, I thought, the snow might be packed enough to get some traction... It's kind of insane to think you can do battle with that. I mean, what power can I possibly have against an historic snowfall? Or the airline's cancellation of my flight home? Or the city's plowing schedule? Even if I could get out of the driveway, I had no confidence in my untested rental car. But what could I do about that now?

Lucky me, I got to practice this powerlessness twice in less than a week! I got to work a puzzle and sip tea in front of the fire with one gracious host and watch movies and catch up on family news with another.

In the calm after the storms, when things were slow and quiet, I realized anew how many things in my life require declarations of powerlessness. I have no control over my mother's declining health or whether she's making friends in her retirement community. I can't manage my children's choices, opinions or occasional outbursts as they make their way as young adults. I can't force people to call me back or read my blog or hire my husband. No matter how much I bargain with the universe, or pray for things to go my way, or simply hope for certain outcomes, in the end it's not up to me.

Stuff piles up in life, just like the snow, and it's a pain in the neck to shovel through it all. That's why sometimes, no matter the weather, it's a good idea to declare a snow day, fix a cup of tea and do nothing at all. 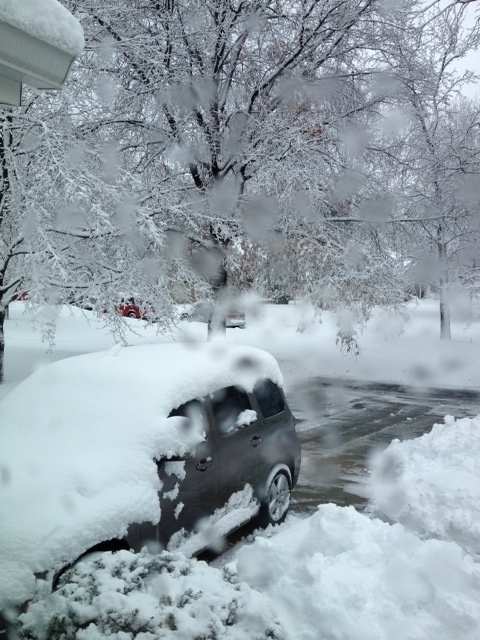