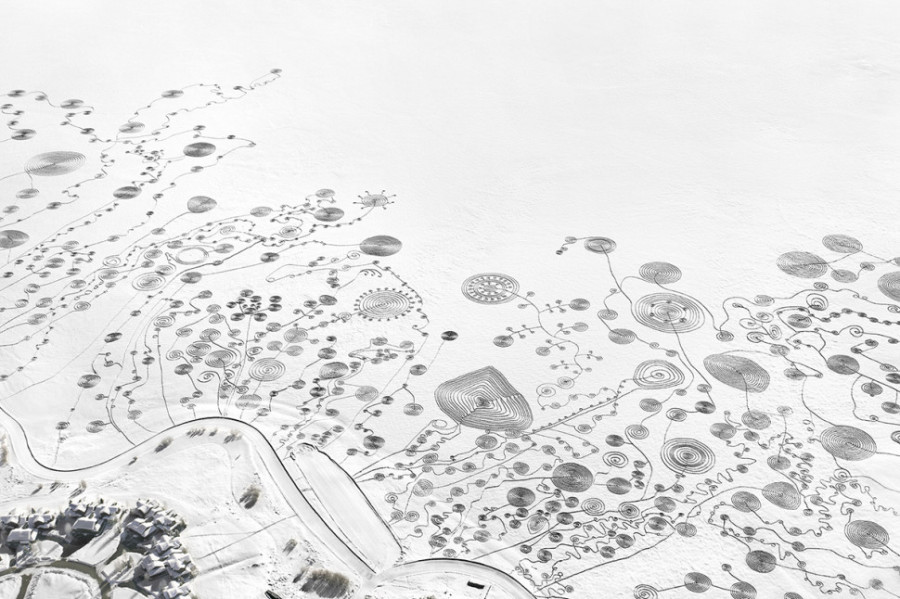 Snow Drawings at Rabbit Ears Pass, Colorado, 2012. "Snow Drawings at Rabbit Ears Pass was created with a group of community volunteers from Steamboat Springs and Hayden, Colorado, on two weekends in January/February 2012 – to both sides of the highway leading that leads across the mountain pass."
Snow Drawings, Hayden, Colorado, January 2011. "These Snow Drawings were created at Carpenter Ranch near Hayden/Steamboat Springs in Northern Colorado. Some of the drawings were on the frozen Yampa River, others on grazing lands close to the river. The large piece in the Yampa River bed took me several days – always coming back to continue where I had left ff the previous day. I was lucky to have clear weather and no snowfall during the days I was working on this piece."
Snow Drawings at Catamount Lake, Colorado, 2013. "Snow Drawings at Catamount Lake was created during the 3 days between Friday February 1st and Sunday February 3rd 2013 in a joint effort with over 60 volunteers from Steamboat Springs and vicinity, who helped me walk giant spiral patterns with snowshoes . Despite deep, heavy snow that made walking difficult and strenuous we managed to create a stunning art piece on the frozen snow-covered lake. I was greatly impressed of the piece that revealed itself when I flew over the lake the next morning to take photos."
Advertisement
Snow Drawings at Catamount Lake, Colorado, 2013
We Are The Water -- Snow Drawing project, Colorado, 2014. "This Snow Drawings piece was created with approximately 50 volunteer performers, who collaboratively recreated – in an abstracted sense – the original flow of the Yampa River and its 4 main tributaries within Routt County, CO. The river is now dammed and the valley is filled with water. In a 4-hour effort the groups of volunteers walked across the lake on snowshoes to create a pattern of a general stream as well as paying tribute to the moods of water, as its flow may be slow or fast, rough or smooth, straight or meandering, whirling in circles and racing down rapids. The piece was photographed from an airplane the day after the event."
We Are The Water -- Snow Drawing project, Colorado, 2014
Advertisement
Snow Drawings at Ooms Pond, NY, 2011. "Snow Drawings at Ooms Pond were created on a small frozen lake near Chatham, NY (Ooms Conservation Area). Local residents contributed their active help to the work on the lake on a weekend in January 2011. Other pieces were created on the lands of Millay Colony Artist Residency nearby."
Snow Drawings, Snowmass Village, Colorado 2009. "I created my first Snow Drawings during an Artist Residency in the Colorado Rocky Mountains in February/March/April 2009. They started out of play during snowshoe walks and gradually evolved into an arts project over the course of my 3-month artist residency."
Snow Drawings, Snowmass Village, Colorado 2009
Advertisement
Go To Homepage