So while you're stuck inside, or within snowshoe-walking distance, here are six fun facts about snow, from the idea that no two snowflakes are alike to the bizarre megadunes that blanket Antarctica.

According to physicists, it's actually true that no two snowflakes are alike — well, at least when it comes to complex snowflakes.

Snowflakes form when water droplets in the clouds freeze to form a six-sided crystal structure. As the temperature cools, more water vapor freezes and grows in branches from the six sides of the seed crystal. As the crystals form, they are randomly tossed about inside the clouds, which vary in temperature.

The temperature greatly affects how the snowflake forms, so while the simplest hexagonal crystals may look alike, more complicated beauties each have their own unique shapes. [See Stunning Photos of Snowflakes] 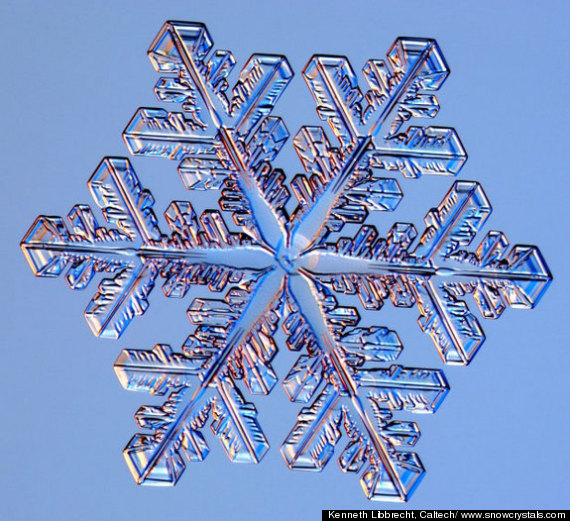 Kenneth Libbrecht, a professor of physics at California Institute of Technology, photographs snowflakes in the field and in his lab. Studio-type lighting, even outdoors, brings out angles, texture and color that are otherwise hard to spot. Credit: Kenneth Libbrecht, Caltech/ www.snowcrystals.com

Most snowflakes form dazzling crystal patterns with six sides. But occasionally, a triangular crystal forms, something that has puzzled physicists for years. A 2009 study in the open-access, pre-publish journal arXiv.org revealed that triangular snowflakes form when the six sides of the seed crystals are slightly asymmetric. This makes them wobble randomly as a snowflake falls, allowing the bigger sides to hit the fast-flowing air inside the cloud, and grow at the expense of the smaller sides.

Other snowflakes have even stranger shapes: Some look like hourglasses, others like spools of thread and still others like needles. And while the quintessential snowflake is the six-armed, symmetrical beauty, most versions are hardly so picturesque. In fact, since the arms of a snowflake all grow randomly, asymmetrical snowflakes are more common.

The types of snowflakes that form depend a lot on the temperature and moisture in the clouds, according to a 2005 review in the journal Reports on Progress in Physics. Right around freezing temperatures, hexagonal plates (the cross-section is a two-dimensional hexagon) and the iconic, six-sided snowflake (known as a dendrite) form.

As the temperature cools, snowflakes develop into needles, then hexagonal prisms and even hollow columns. Go colder still, and dendrites form at much larger sizes. And at truly frigid temperatures, the frigid air forms prisms and flat plates.

Because snow is so fluffy (meaning it's chock full of air), a relatively small amount of water can translate into a huge pile of snow. An inch of rain on average makes about 10 inches of snow. The biggest snowfalls on record are hard to compare, but the Great Snow of 1717 dropped about 3 to 4 feet (0.9 to 1.2 meters) on Boston inhabitants, with some drifts reaching 25 feet (7.6-m), according to the National Snow and Ice Data Center. 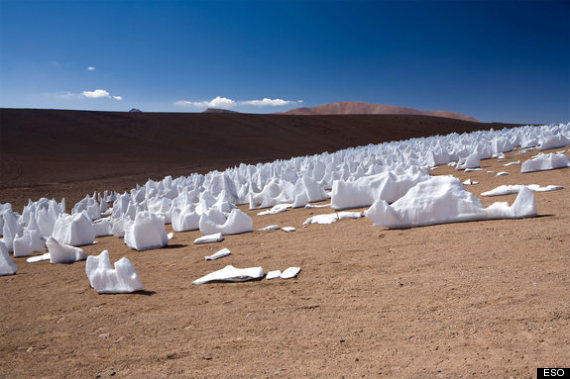 This photo of penitentes, ice formations formed in high-altitude regions, was taken in December 2005 along the Chajnantor plain in Chile. Credit: ESO

An old saying claims the Eskimos have dozens of different words for describing snow. While that turned out to be a myth, there are many types of snow crystals and even more snow formations. Aside from the snowflake, there's also hoar frost and graupel, according to the National Snow and Ice Data Center.

Hoar frost forms on surfaces that are colder than the frost point in the air around them, so water goes straight from vapor to solid. This spiky, fluffy snow tends to form on tree branches, telephone wires and other skinny items exposed to the chilly air. Graupel, which consists of hard ice pellets, forms when snowflakes fall through a cloud that contains supercooled water droplets. The droplets freeze onto the snowflakes and form misshapen, lumpy balls.

While the snow on the driveway may just be a pile, the fluffy white stuff creates beautiful formations in nature. Lovers of winter sports know to be wary of cornices, overhanging snow that juts from the edge of a cliff.

And in Antarctica, giant snow formations known as megadunes form from monstrous snow crystals that are up to 0.75 inches (2 cm) across, according to the National Snow and Ice Data Center. (There can be several snow crystals in a single snowflake.) In arid locales like Death Valley, Calif., piles of snow can be transformed into penitents: bizarre, spiky formations that look like the stalagmites that form in caves.